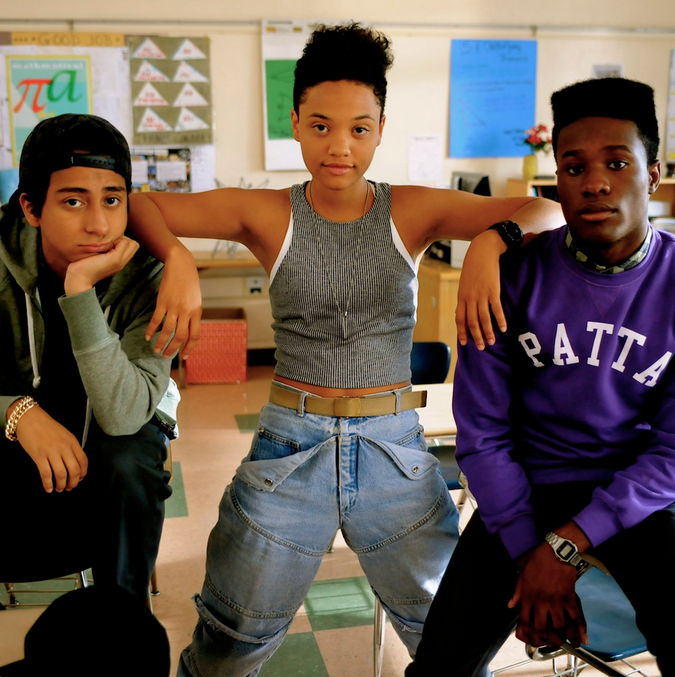 There’s much excess to Rick Famuyiwa’s coming-of-age comedy, Dope: a preponderance of meme-culture yucks, ostentatious action sequences, heavy-handed themes, drawn-out procedurals, gluttonous dollops of exposition, and an endless barrage of modern pop cultural references that will seem out of touch years from now. But, within the 2014 scrapbook are three very intelligent, very funny, and very quirky characters who are simply too diverse to ignore.

There’s a bond between the three that’s palpable and quite charming. They do everything together, whether it’s riding their bikes around the hood, looking for old-school hip-hop on vinyl, or playing their original (ahem, Pharrell-penned) songs in their rock band, Awreoh. Their world gets turned upside, however, when Malcolm’s approached by a benevolent gangster named Dom (A$AP Rocky in a surprisingly strong cameo). The two bond and Malcolm and his peers eventually find themselves in a trendy nightclub drinking and partying with Dom’s crew.

Unfortunately, a backdoor drug deal goes bad, shots are fired, and the cops invade the club. In an attempt to save face, Dom tosses his gun and several bricks of MDMA in Malcolm’s bag unbeknownst to the Harvard prospect. It’s not until the following day that Malcolm makes the terrifying discovery, on school property no less, tipping off a torrential downpour of problems that never stop tossing hurdles at Malcolm, Diggy, and Jib.

From there, the film spirals into one dubious sequence after the next. Some of it’s hilarious, some of it’s placid, and some of it’s expected. There’s a chase scene on bikes that’s frantic with nostalgia, but then there’s an embarrassing sight gag involving public urination. Fortunately, everything goes by so fast that any glaring misstep is often absolved in lieu of stronger, applause-worthy set pieces — and Famuyiwa’s full of them.

The veteran African-American filmmaker’s imagination is ablaze in Dope. He’s 41 years old, yet the film takes off with the spirit of a young stud who’s found the keys to his father’s Porsche. Liberally, he flashes his influences with stylistic nods to Quentin Tarantino, John Singleton, Michael Haneke, and Spike Lee; gangsters gnaw on Obama’s drone warfare, the streets are gorgeously soaked in the California sun, action is reversed as if the narrator’s holding a remote control, and Malcolm delivers a passionate monologue to his audience, respectively.

Though the film’s not without its share of substance. Famuyiwa’s thematic intention for Dope is to articulate the difference between perception and reality, and amidst this study he thumbs through a Rolodex of hot-button issues, specifically the unwarranted suspicion by the police, the use of the n-word (involving Workaholics’ Blake Anderson, no less), and the tragic deaths of Aaron Swartz and Trayvon Martin. As is the case with much of the film’s tenets, some of the material lands, some of it flops.

What certainly doesn’t work is the film’s Apatowian runtime of 115 minutes. About midway through the film, the once adrenalized production slowly moves into its sluggish caboose, no doubt affected by its multiple endings that likely outnumber those within The Return of the King. At the screening on Sunday night, the majority of the audience began to applaud during the “third ending,” despite there being five more minutes left in the story. That’s quite telling.

On the whole, Dope is a smart if not hefty comedy by a filmmaker who has a lot to say and yet still much to learn. Considering that Open Road Films paid $7 million dollars for the picture over the weekend, it’s likely he’ll have many more opportunities to refine his approach in the years to come. That’s pretty dope for everyone.