A new wave of heavy bands stakes its claim

by Jon Hadusek and Sean Barry 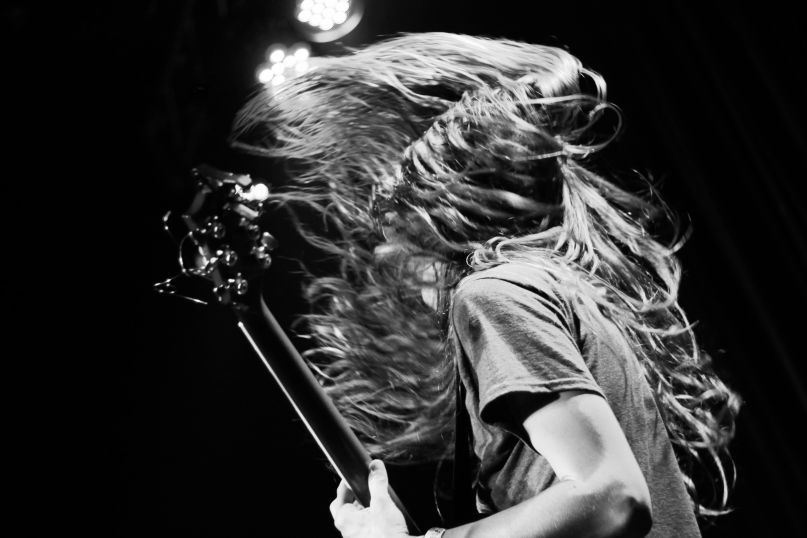 You won’t see any household names on this list. The first half of 2015 has been dominated by rookie bands and upstarts, and they’re ushering in a new wave of heavy music. If there is any continuous thread here, it’s the unbridled originality of the artists. They remain true to their own vivid personalities and express a range of emotion through metal, from the vegan doom of Vile Creature to Bell Witch’s romantic horror. There are six months to go and plenty of releases on the horizon, but these are our picks for the year’s best metal albums so far.

Questions about their true country of origin and allegations that they’re just a Deafheaven copycat (Sunbather vs. Moonlover, “Dream House” vs. “Happyhouse”, “The Pecan Tree” vs. “Beneath the Shade Tree”) aside, Ghost Bath delivered unto us this year a remarkable work of post-black metal. Wonderfully composed chords shine through a gloomy atmosphere that acts as a backdrop to Nameless’ operatic howls. Tragic, yet somewhat empowering, Ghost Bath present here a work worth more thought than what’s been put into trying to figure out the band’s true identities. I won’t mind the mystery as long as this band continues putting out work like this. –Sean Barry

9. Tribulation – The Children of the Night

Tribulation wears the many faces of metal, but never claims any sole façade. The band’s sophomore album, The Children of the Night, is at once thrashy, black, and gothic. Think Into the Pandemonium-era Celtic Frost: The intent of each track is different, and there’s a clear, consistent progression of ideas, as if Tribulation is afraid of getting bored of itself. Fans of traditional heavy metal and NWOBHM will swoon over the guitar interplay of Adam Zaars and Jonathan Hulten. Their solos breathe and flow, lending a cohesiveness to the record. —Jon Hadusek

Mondo Drag’s self-titled record is their most inspired work yet. It sounds like a lost artifact of the proto-metal era, the missing link between ’70s heavy psych acts like Atomic Rooster and the spiraling chaos of krautrock. Each song touts a tight groove and a remarkable solo or two, staying loose but never so loose as to wander into aimless jamming. The varied instrumentation and heavy use of flute and organ also help distinguish Mondo Drag among the recent crop of ’70s revivalists. —Jon Hadusek

Hailing from the same land as the mighty and violent Eyjafjallajökull, black metallers Misþyrming released their searing debut album in February on Fallen Empire Records and have so far remained unsurpassable in terms of sheer ferocity. Söngvar elds og óreiðu (“songs of fire and chaos”) is relentless, with blazing riffs raining down upon the vocalist’s scorched-earth growls and cries. With an incomparable level of passionate aggression, Söngvar elds og óreiðu has for months been at the top of my list when it’s come to 2015’s best black metal. –Sean Barry

Repping the Riding Easy Record front in early 2015 is Sweden’s Monolord, a doom trio vying for heaviest band in the world. Their latest entry, Vænir, bludgeons your subwoofer to an almost dangerous degree with its low-end. The production is startlingly clear, capturing the full breadth of the band’s crushing tonalities, most notably Thomas V. Jäger’s guitar tones, which pay homage to Entombed’s Left Hand Path and the old purring HM-2 pedal — a staple of Swedish metal. But don’t expect any death growls here: Vænir is a mellow heavy. The vocals float in the distance as wordless melodies, and there’s a focus on minimalism and post-rock repetition. Play it loud and bask in the bass.–Jon Hadusek

A Steady Descent into Soil came to my attention thanks to a Noisey feature on the Ontario-based Vile Creature, a duo who classify themselves as “Anti-Oppressive, Queer, Vegan Doom + Gloom.” While it was their identity that caught my interest, their wrathful and clearly pained music kept it. Driving and determined, drummer Vic’s pace menaces while guitarist and vocalist KW shouts down ignorance and oppression. The album all comes to a powerful end with the title track in which the pair join together in welcoming death in anthemic anticipation, because when it seems like no one will accept you as you are, what difference is it to the earth as your body and your mind are finally laid therein? –Sean Barry

Combining medieval chamber music with black metal, Aria of Vernal Tombs has the transportive power to take listeners to another time and place. Wire harp interludes evoke an ancient past (a la the peaceful score of Elder Scrolls: Skyrim), segueing into black metal compositions that retain an airtight atmosphere of otherworldliness. Imagine castle walls surrounded by ancient forestry, archers on the ramparts, and evenings spent tapping ales from barrels in the village tavern. Obsequiae have crafted an escapist masterpiece not unlike Summoning’s Stronghold, normalized within its own fantastical contexts so as to dispel the illusion of musical cosplay and exist on its own timeless plane, no suspension of disbelief necessary. –Jon Hadusek

I’m unsure what it is about The Ark Work that’s kept me coming back nearly every week since it came out a couple months ago. Maybe it’s the blinding and heroic riff on “Quetzalcoatl” that makes me feel like Dante standing with Virgil upon the mount staring into the rose-like saintly throng in Paradise. Or maybe it’s the gladiatorial crescendo in “Follow II”. Or maybe it’s how fearless Liturgy is to present themselves on “Reign Array” so purely with everything from impenetrable and monotonous lyrics to the sounds of bagpipes. Whatever it may be, in the light of its self-asserted glory, The Ark Work makes me feel invincible, and I can’t shake my love of it. –Sean Barry

Elder’s Lore is a feat of genre-bending progressive metal that’s part Television, part Rush, and part Beethoven. The songs push 10 minutes in an almost carefree manner, constructed as symphonic movements of arpeggiated riffiage and stoner rock triumph. If you like guitar music, you’ll like Elder. And Lore is their classic album. It shares the romantic tinges of Pallbearer and Gojira, while also appealing to those who just want to hear sick riffs. Having formed a few years ago when they were still teenagers, these three ornery kids from Boston are still young — far younger than their colossal songwriting would indicate. They’re just getting started and already cranking out masterpieces like “Compendium”. It’s a matter of reaching ears at this point, and Lore might just be the tipping point to metal stardom. –Jon Hadusek

Conceptually brilliant and sonically devastating, Bell Witch’s Four Phantoms has entrenched its place among the very best 2015 has to offer. Its immensity and the haunting tales told within give it the feel of a great tragic tome telling of long-lost and helpless spirits. Drummer Adrian Guerra keeps a mournful and torturous pace as he and bassist Dylan Desmond intone soliloquies from ghosts trapped in elemental purgatories. As a fan of frightening atmosphere, sorrowful storytelling, and massive walls of noise, Four Phantoms has everything I could ask for and then some. –Sean Barry