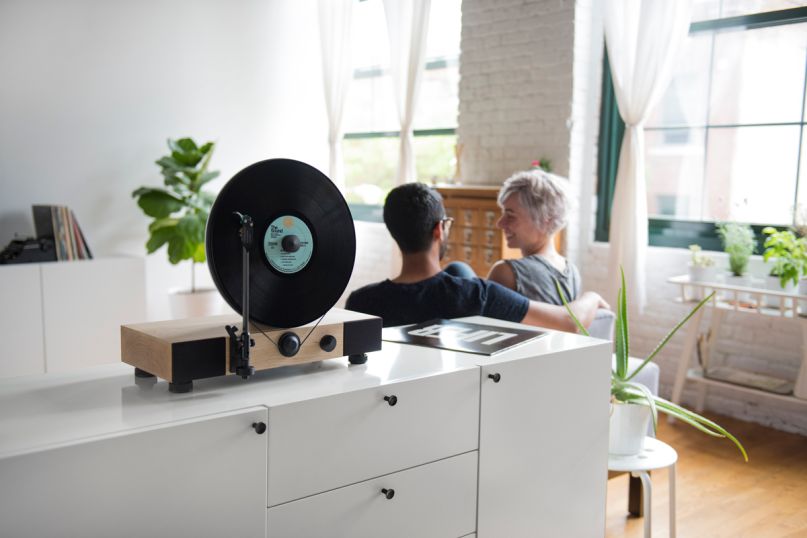 Playing records horizontally is so 20th century. Thanks to Chicago electronics start-up Gramovox, you’ll now be able to spin vinyl in a whole different direction with a sleek, new vertical turntable called Floating Record. The company recently launched a Kickstarter to make their upright vision a reality and have already, at time of publishing this article, more than doubled their $50,000 goal.

Gramovox aren’t the first to attempt a vertical design. Sony released their own model in 1983 with the relatively forgotten PS-F5. The Floating Record, however, has a much more vintage look with its maple and walnut wood paneling. The player also includes built-in speakers, amplifiers, and a phono pre-amp. All this means that it takes up a lot less space than a normal Technics or Audio-Technica stereo sytem, and looks a heck of a lot more elegant.

For those worried about records falling off, fret not. The design includes record clamps, fit for both LPs and 45s, that secure your albums in place while the spin. They’ve also balanced the tone arm to avoid skipping due to modulations in the grooves. Listeners can easily go between 33 1/3 and 45 RPM speeds by switching the silicon belt to a different track on the gear in the back.

Gramovox hopes to begin shipping the players in December of this year. Pre-orders are available through contribution to their Kickstarter. The start-up had another recent success last year with their bluetooth gramophone, which they also crowdsourced for distribution. Check out the Floating Record Kickstarter pitch video below.