Why a Comprehensive Beach Boys Biopic Would Likely Fail

Do you really want to see 15 minutes devoted to "Kokomo"? 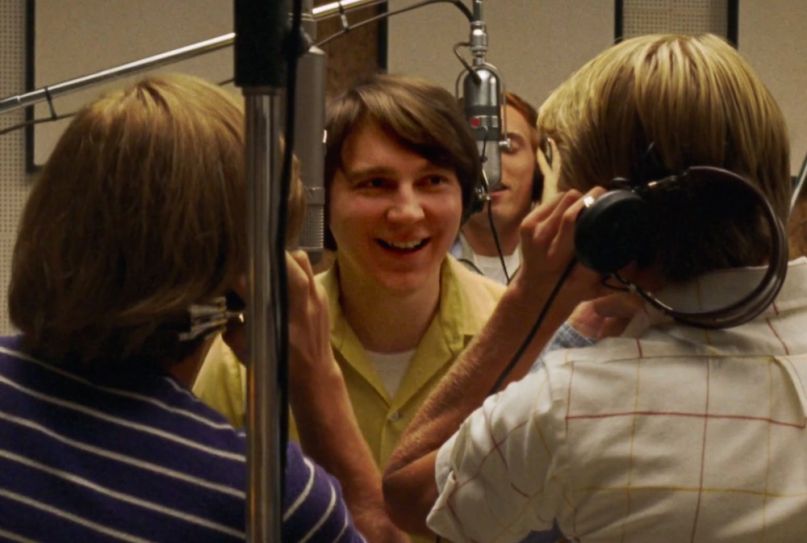 Had director Bill Pohlad approved the original script, the Brian Wilson biopic opening in theaters this weekend would be called Heroes and Villains, and it would likely present a linear, comprehensive account of The Beach Boys mastermind’s life. And it would probably suck.

Regardless of how Pohlad fares with Love & Mercy — a film that focuses on just two eras, the ‘60s and the ‘80s — he’ll almost certainly tell a better story than he would have by going the traditional route a la Ray or Walk the Line. This has largely to do with the subject matter. Done right, rock ‘n’ roll history, like art history, is really just history history, ancd given that the Beach Boys are “America’s band” — a title they’ve earned through five decades of sustained popularity — any attempt to tell their tale is tantamount to recapping the last half-century of American culture.

In many ways, the story of this undying dysfunctional family act is the baby-boomer saga writ small and super strange. Even a three-hour version would be like Billy Joel’s “We Didn’t Start the Fire”: too reductive to function as truly illuminating.

Plus, a movie called Heroes and Villains would risk oversimplifying the central conflict and pitting Brian the gentle genius — a man who “just wasn’t made for these times,” as he sang on his 1966 masterwork Pet Sounds — against legions of greedy bad men, like his domineering father, Murry, his bullying cousin and bandmate Mike Love, and controversial psychologist Dr. Eugene Landy, who essentially ran his life from 1982 to 1991.

The truth isn’t so black and white, and in a broader context, the hippie generation the Beach Boys came to symbolize is neither completely blameless nor totally culpable in failing to create a utopian world fundamentally different from that of their parents. The hippies were victims of circumstance and self-sabotage, and because the Beach Boys were, too, they make excellent bellwethers.

That’s jumping ahead, but from the very beginning, the Beach Boys were emblematic of their generation’s virtues and shortcomings. Mixing Chuck Berry boogie with white-bread vocal harmonies, their earliest songs center on two things: surfing and hot rods. As many critics have remarked, these deceptively innovative tunes celebrate youthful freedom through consumerism, referencing automobile models and engine parts as if they were written by ad men.

Perfect for the spend-spend-spend post-war years, tunes like “409”, “Shut Down”, and “Little Deuce Coupe” are about achieving happiness by driving the fastest, shiniest ride. On 1963’s “Ballad of Ole’ Betsy”, a vaguely misogynistic gearhead’s version of The Giving Tree, it takes a few lines before Brian lets on he’s pining for a car, not a girl.

Despite their materialistic bent, these early recordings — everything from the group’s 1961 debut single, “Surfin’”, up to the transitional 1965 album The Beach Boys Today! — are misguided at worst. While some critics have drawn insightful parallels between the Beach Boys, who hailed from the L.A. ‘hood of Hawthorne, and the similarly acquisitive gangsta rappers who’d come straight out of Compton a quarter-century later, there’s an exuberance and lack of cynicism in the Beach Boys’ material that renders such comparisons problematic. (On “Little Honda”, Love doesn’t need the biggest motorbike — just something he can use to cruise with his sweetheart.)

The lack of edginess on those early Beach Boys records creates a sense of wholesome hokeyness that hasn’t served the group particularly well. They’re rarely talked about in the same breath as the Beatles and the Rolling Stones, and when they are, it’s really only because of two albums: Pet Sounds (a major focus of Pohlad’s film) and its troubled follow-up, SMiLE, which Brian abandoned in 1967, after suffering a mental breakdown.

Both records arrived as the counterculture was taking hold, and hippies were replacing hot-rodders and surfers in high schools across the land. It was an awkward time for America, and it was precisely because of their square-ness and roots in the early ‘60s that the Beach Boys epitomized the uneasy transition better than most bands. They weren’t the most natural beardos, these clean-cut guys from mythical sun-and-fun Southern California, and that — plus, of course, Brian’s genius — explains why Pet Sounds and SMiLE don’t sound like other records from the psychedelic era.

They also weren’t what young people wanted to hear. While Pet Sounds sold well in the UK, the gorgeously maudlin chamber-pop song cycle peaked at a disappointing No. 10 on the Billboard 200. It’s hard to imagine that SMiLE — a winding patchwork of pun-laden, kaleidoscopic suites arranged into an alternately whimsical and terrifying concept record about American history, childhood, vegetables, drugs, and god only knows what else — would’ve sold much better had Brian been able to finish it. It’s a brilliant record, as the countless bootlegs and long-awaited official 2011 box-set release attest, but outside of “Heroes and Villains” and the chart-topping single “Good Vibrations”, there’s not a lot that would’ve worked on radio.

In the aftermath of Wilson’s breakdown, as the hippie dream deteriorated and the free-love ‘60s gave way to the drab, depressing brown and yellow ‘70s, the Beach Boys once again typified the times. Increasingly reclusive Brian succumbed to druggy L.A. culture, and the band fell seriously out of fashion. Young America was losing its way, and the Beach Boys more adrift than anyone.

And yet the boomers didn’t crack up and become a lost generation. By the ‘80s, a nation of former scruffballs had found jobs and gone respectable, and the Beach Boys similarly pulled through, becoming a popular live draw endorsed by none other than President Reagan. They even managed some decent records (1970’s warm and harmonious Sunflower, 1974’s Brian-free soft-rock gem Holland, 1977’s zany Brian-helmed Love You) along the way. Mostly, though, they benefited from the same rampant nostalgia that led to American Graffiti and Happy Days.

The question of whether to capitalize on America’s longing for simpler times or push ahead with new music became a difficult one for the Beach Boys, and in 1981, forward-looking Carl temporarily left the band to pursue a solo career.

Ultimately, of course, the Beach Boys would remain a nostalgia act, though any all-encompassing biopic would have to devote 10 or 15 minutes to “Kokomo”, that cheese martini of a comeback single from the Cocktail soundtrack that reached No. 1 in 1988, giving the band its first chart-topper since “Good Vibrations”. A Beach Boys song in name only, “Kokomo” is like “Fun, Fun, Fun” for Jimmy Buffet yuppies — a song about jetting off to and vegging out on some island that doesn’t actually exist. Brian neither wrote nor sang on the track, and by virtue of miming along to bongos in the video, John Stamos has more to do with the song than the group’s longtime leader does.

From “Kokomo” onward, the Beach Boys story gets bogged down with ugly lawsuits and squabbling. In the ‘90s, following Carl Wilson’s death from lung cancer, Love commandeered the name and continued to play the oldies circuit — even as the band enjoyed a critical and popular resurgence sparked by super fans like R.E.M. singing Brian’s praises.

In 2012, the Beach Boys returned with a well-received new album called That’s Why God Made the Radio, but old beef proved unsquashable, and the surviving members weren’t able to parlay a summer reunion tour into any kind of lasting reconciliation. A planned follow-up album became this year’s Brian Wilson solo record, No Pier Pressure, which features duets with the likes of Nate Ruess, Kacey Musgraves, and She & Him.

In the context of a film, the bad blood that courses through Beach Boys history might raise questions about whether the outwardly idealistic children of the ‘60s were actually full of crap and always out for their own interests, just like the authority figures they sought to replace. It could also be that the Beach Boys were sunk not by greed or temptation, but rather by Brian’s mental health issues, which might have stemmed from Papa Murry’s abuse and been exacerbated by drugs and booze and Dr. Landy’s experimental psychology but certainly weren’t endemic to members of his generation. Brian was and is a troubled individual who doesn’t really fit the mold of a surfer, a hippie, a ‘60s acid casualty, or a back-from-the-brink survivor.

For all of these reasons and many, many more, the Beach Boys is a fascinating band to study and a lousy one to sum up via screenplay. It’s better to stick with Brian and delve into fragments of his life, as Pohlad has done with Love & Mercy. Even then, though, there can be no neat and tidy Hollywood ending.