St. Elmo’s Fire Might Be the Worst Movie Ever

The passion burns deep ... with hatred 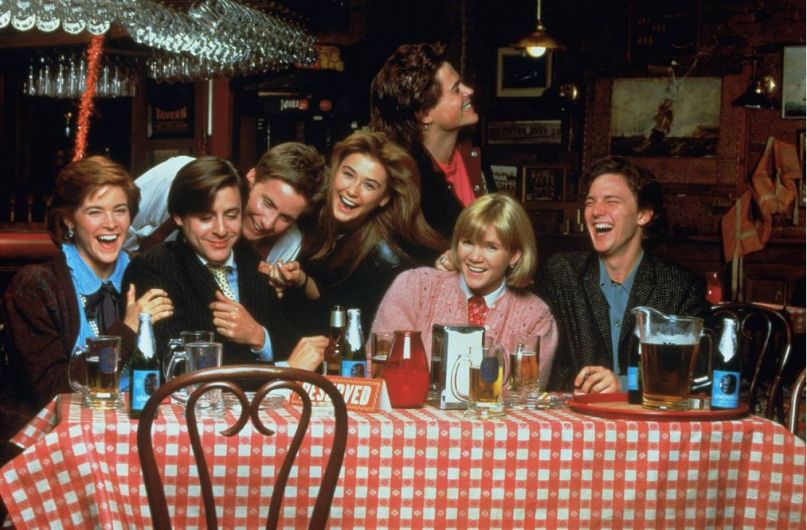 Worst Movies Ever is a new feature in which our staff highlight films that failed in every way imaginable to deliver a palatable cinematic experience. It’s further proof that a budget, star power, and talent alone cannot guarantee a watchable movie. This month, Film Editor Justin Gerber roasts St. Elmo’s Fire.

An innocent enough question, I suppose. What harm could asking such a question inflict upon a fellow human being? After all, the answer is either “yes” or “no.” Plain and simple. No explanation necessary. When my brother asked me this question last year, my answer began with “no,” but it didn’t end there. I was foolish. As a writer, my curiosity always gets the best of me, and I couldn’t simply answer the question with a “no.” No! No I would not answer such an innocuous question with an uninteresting answer. So instead I opted to respond with:

Eleanor Roosevelt once said, “Life must be lived and curiosity kept alive. One must never, for whatever reason, turn his back on life.” But what about curiosity, Eleanor, if one has a good reason? Even after the conversation between my brother and me concluded, I didn’t have to pursue the topic any further, especially after what he told me.

My brother was right. I didn’t know just how right he was until I finally saw St. Elmo’s Fire nearly 30 years after its release date on June 28, 1985. It is awful. I’m prepared to say it’s the worst movie of all time, with all the necessary stipulations lined up and accounted for. It’s worse than a movie like The Room or Troll 2 because the people who made those movies are not capable filmmakers or actors (Wiseau tangles with accidental greatness with The Room, but that discussion is for another time). St. Elmo’s Fire was produced by X-Men franchise producer Lauren Shuler Donner. One of the producers of Troll 2 financed porn … after Troll 2.

St. Elmo’s Fire was directed by Joel Schumacher, someone who’s made a few duds in his career (Batman & Robin alone works as a fine example) but still has some decent-to-solid films in his 30 years behind the camera. The cast includes members of The Brat Pack — a famous group of young actors who popped up in everything from John Hughes movies to a whole lot of “young lawyer” flicks in the mid-to-late ‘80s. Sixty percent of The Breakfast Club is in this movie, for chrissake. Everyone loves that movie!

Everyone is to blame here. The direction is bad. The set design is bad. The performances are bad, even if it’s more of an issue of actors being unable to elevate a bad script. St. Elmo’s Fire is a misfire of epic proportions, awash in feign emotions and tonal shifts that make the ending of Pay It Forward seem like a natural piece of filmmaking. Light up a cigarette, get out your Billy Idol artwork, and let’s boogeda-boogeda-boogeda-uh-uh-uh!

Billy Is the Worst

We’re introduced to Billy (Rob Lowe) as he plays his saxophone in the back of an ambulance. An officer comes over to him to tell him he’s under arrest. He turns to the ambulance nurse and asks, “Do you believe in premarital sex?” She giggles, because it’s the movies in 1985. Oh, and his offense? Drinking and driving Wendy’s car, totaling the car and injuring Wendy (Mare Winningham) in the process. Despite all this, the gang manages to end up at St. Elmo’s Fire for beers, bros, babes, pizza, and giggles. Billy’s the best!

How great is he? He’s also a deadbeat dad, floundering through life and jobs his friends get for him. At one point, he tries to get his other friend Jules (Demi Moore) to go down on him by putting her car keys down his pants (“Come and get ‘em.”). She kicks him out of her car and tells him she really needed a friend. His response? “Get back in the jeep, and assume the missionary position.” She drives away … and we discover he’s on his estranged wife’s front lawn when she comes out holding their baby.

Fortunately, Billy gets his comeuppance by miraculously kicking his drug habit in a span of two seconds, makes the wise decision to move to L.A. (where there are no drugs or drinking of any kind), which his friends support, and sleeps with Wendy, who he almost killed in the beginning of the movie, as a sympathy screw. It’s like Entourage before Entourage with this dude. Cool sax, though.

His worst moment? Billy turns to his aforementioned estranged wife (played by Near Dark’s Jenny Wright) and begs, “Don’t you give up on me!” Rob Lowe can be great when given good material, but he’s not one to elevate the bad.

Kirby (Emilio Estevez) is completely deranged. In the opening scene, after everyone makes light of the fact that one friend almost caused the death of another, Kirby recognizes Dale (Andie McDowell), a young doctor he went out on one date with years earlier. One date. That’s all. Not to make excuses for the character, but this wasn’t some long relationship that ended in heartbreak. This was a bad date gone … well … bad. The more we get to know Kirby, the easier it is to understand why she’d want to break it off.

Dale is ridiculously polite. She agrees to meet with him for lunch, even though she has a serious boyfriend. Kirby’s delusions of what love is we would identify as obsession. He can’t reach her for a second date and decides to stalk her, ultimately following her to a black-tie event. He walks in, soaking wet. Music stops, everyone looks at him. Dale asks how he is, to which he responds, “I’m obsessed, thank you very much.” Naturally, she leaves her boyfriend and takes him back to his apartment because she’s concerned for him, and then this happens:

Later on, Kirby tracks Dale to a remote cabin in the woods where she is vacationing; he pounds on the door demanding to see her. Long story short, Dale’s boyfriend invites him in for the night, so he won’t freeze. The next morning as she sees him off, she says the following: “I don’t really know you that well, but you seem like a fine person, and I want you to know that I’m flattered by all this. Deep down, I’m sure for a long time I’ll wonder if somehow, this isn’t my loss.” What? This is verbatim. Kirby takes his chance, dips her, and kisses her. Then the boyfriend comes out and takes a picture of the two of them, for no reason. Kirby drives off to triumphant music, pumping his fist out his car window. Would someone please remix every scene he’s in with Bernard Hermann’s Psycho score?

Young Republican hotshot yuppie scumbag lawyer Alec (Judd Nelson) is in a long relationship with Leslie (Ally Sheedy). Their mutual friend is Kevin (Andrew McCarthy), who everyone thinks is gay. What no one knows is that he’s not actually gay; he’s in love with Leslie! This isn’t the worst subplot in the world, let alone the movie. Hell, it was good enough for Three to Tango, so who am I to judge? No, the issue is the resolution of the triangle, or lack thereof.

As you can imagine, Kevin finally admits his feelings to Leslie, and they wind up sleeping together. Don’t feel bad for Alec, who is an adulterer perilously close to being a pure sociopath. After the gang says goodbye (and we say “good riddance”) to Billy, Leslie tells her boys that she’s going to try it alone for a while and hopes they can still be friends. I shit you not — the trio starts giggling and agree to do so. Why are these people friends? Why was Leslie even considering taking back awful Alec? In what universe does any of this happen?

At least when Kelly told Brandon and Dylan the same thing, confusion and sadness followed. Don’t act like you don’t know what I’m talking about!

Jules is at the end of her rope. She has lost all of her furniture to creditors, been dumped by her boss, and can’t get enough coke. Most importantly, she has lost complete control of her curtains. Look at these things billowing in the wind. How did she bring these home? I half expect Pink to come over and replicate one of her awards show performances. The walls even match her namesake.

This is the climax of the movie. Jules refuses to come out, so Leslie gathers the troops together to try and save her. The following happens:

01. Kevin thinks that Jules is trying to freeze to death because she has left the windows open.

02. Alec dangles Kevin from a fire escape for sleeping with his wife — straight-up considering murdering him. This is not played for comedy. Leslie and Kevin convince him not to do it.

03. “Blowtorch, anyone?” is a question that Kirby asks with a smile and a giggle, despite knowing that his friend is in an awful psychological state inside with possible irrevocable internal damage thanks to heavy cocaine use. Oh, the blowtorch is needed so they can make their way through the bars of her apartment windows.

04. Billy, the worst human in the movie, gets in and convinces Jules to get help. This coming from a drunk who beat his addiction via the power of douchebaggery, as well as the same dude who nearly forced himself upon her an hour (movie time) earlier.

05. They all get in, and Leslie starts to make coffee. Kirby declares, “They’re laughing!” The action strongly resembles the climax of most Marx Brothers movies, and while it’s just as funny, it’s for all the wrong reasons.

Even Rob Lowe admits it’s cheesy beyond redemption by appearing in those DirectTV ads. The St. Elmo’s score pops up at the end of each and every one.

These bastards convinced the great Martin Balsam to appear as the rich daddy to Wendy’s dependent daughter. We’re talking Arbogast from Psycho. 12 Angry Men. The Twilight Zone. Cape Fear (both of them!). All the President’s Men. Granted, he was also in Death Wish 3, but at least that movie has Charles Bronson using a rocket launcher.

In Closing: Humans Being

After a disastrous screening at Cannes, The Observer’s Jason Solomans said that Richard Kelly’s Southland Tales “was so bad it made me wonder if [Kelly] had ever met a human being.” The same can be said for St. Elmo’s Fire’s screenwriters Schumacher and Carl Kurlander. You know Kurlander. He went on to write and produce Saved by the Bell: The New Class, a show that made the teen angst of the original Saved by the Bell look like A Separate Peace in comparison.

Nobody feels real in St. Elmo’s, especially when the song plays during one of the many bar scenes at the establishment (was John Parr a frequent visitor?). I could go on about the time Billy and his friend stop playing football mid-game to chat about life while plays go on around them. I could talk about this exchange of dialogue between Alec and Leslie: “You fucked Kevin!” “You fucked many!” I could mention Jules’ strange obsession with her ill stepmother. I could do all of these things to further convince you that St. Elmo’s Fire is the worst movie of all time … but I get the feeling …

…someone’s outside my window.

Update: After a thousand comments, it was brought to my attention that what Rob Lowe says is “premarital SAX” and not “premarital sex.” Movie is still awful. Carry on.