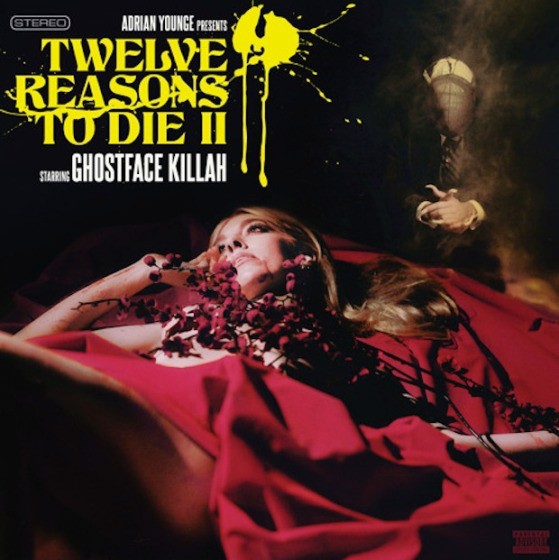 Although its two installments have been marketed as concept albums, Ghostface Killah and Adrian Younge’s Twelve Reasons to Die series is really more of a rock opera. And I will always prefer the rock opera over the concept album. That’s not to say that the rock opera is always better than the concept album. It’s just an art form that’s inherently more risky and thus, more interesting — a collection of songs that, in addition to being thematically connected, must form a coherent narrative arc.

If we’re only judging Twelve Reasons to Die II on this kind of story-driven criteria, then it’s a knockout. As with its predecessor, the narrative is a marriage of exploitation horror and urban street drama, an elaboration on the kind of grit-meets-gimmick composition that the various members of Wu-Tang Clan have been pulling off for over two decades. Even better, it’s a true horror sequel in that everything is crazier and more expansive than what came before it.

The protagonist this time around isn’t Ghost himself, but a New York City gangster named Lester Kane, who, as played by Raekwon, also finds himself at war with the DeLuca crime family (recently transplanted from Italy to The Big Apple). After his wife and son are murdered, he stumbles across a box of vinyl LPs that, when played, resurrect the murderous spirit of the Ghostface Killah (when Tony Starks got killed in the first album, his remains were laid to wax and … anyway, it’s a long story). Ghost agrees to help Kane act out his vengeance on the DeLucas, but only if he agrees to hand over his body and soul once the ordeal is finished, so that Ghost may once again roam the streets as a mortal man. Making things even more complicated is the discovery of Starks’ former mistress (the wife of the DeLuca kingpin) and his illegitimate son, who have been kept under lockdown since his death.

Thanks to more economic-than-usual rapping (you won’t find anything like “Dociousaliexpifragalisticcalisuper” here), clever storytelling devices such as a fake Daily News transcription, and, most useful of all, spoken word interludes from RZA to catch the listener up to speed, the complicated horror yarn goes down easy. And yet that’s also the problem with Twelve Reasons to Die II. It sometimes goes down a little too easy. It’s not that I expect a pulpy horror album to be as frightening or even as violent as a pulpy horror movie, but when everything comes wrapped in Younge’s head-leaning soul grooves, the music suddenly trades in nastiness for coolness. Ghost’s best tales — from “Maxine” to “Shakey Dog” — manage to tear out your jugular not just because of the hard-case lyrical details, but because their beats are dynamic and menacing. The horns pound with deliberation, then drop out; there are crescendos, changes in key and tempo. But the vintage drums and comic book keys in “Rise Up” simmer at the same unmoving temperature throughout the whole song, never able to elevate the gang warfare lyrics above the kind of street tale you’d hear on many other Wu-Tang solo albums, or many other hip-hop albums in general. The same goes for “King of New York” and “Get the Money”, despite a verse in the latter from Vince Staples. They all fall into the same sonic pattern: Younge locks into a richly textured groove, Ghost and his guest stars rap over it for a couple minutes, then get out of the way.

So it’s natural that the album’s best cuts are the ones where the performers work overtime with their words. Where the earlier “Rise Up” relies on run-of-the-mill gunplay, “Death’s Invitation” and “Blackout” both embrace a distinct kind of horror movie violence, becoming instantly memorable with their images of Ghost shoving an M-80 up someone’s ass and smashing a foe in the head with a disco ball. “Resurrection Morning” also achieves cinematic specificity by getting into the queasy details of Kane’s self-sacrifice. It’s in these final moments that Twelve Reasons to Die II becomes fun and spooky instead of just smooth. And with the door left open for another sequel, hopefully Ghost and Younge will continue in that direction for a grand finale.