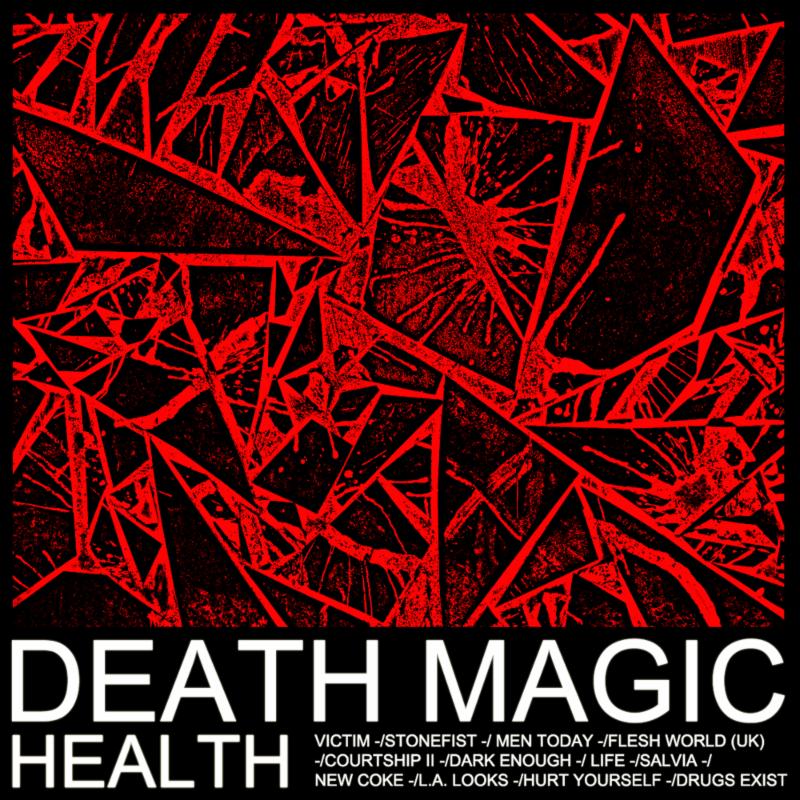 L.A.’s HEALTH arrived like a stampeding triceratops. They had a thundering track by that name, sure, but their sound combined the massive weight and blunt strength of the extinct beast and featured piercing focal points akin to the dinosaur’s horns. There was something feral about their blend of guitars, drums, and burning synths, not to mention the Zoothorn, a microphone fed through obscuring and chaotic effects pedals. All along, though, they displayed their connections to and passion for pop and electronic music. They first rose to national prominence, after all, through Crystal Castles’ rework of “Crimewave” and later released two HEALTH//DISCO albums full of remixes. The infusion of that sound came to the fore with their superb cover of labelmate Pictureplane’s “Goth Star”, in which the outfit used pounding drumming and crystallized guitar to replicate the producer’s electronics. The cyborg version of that triceratops was as nimble and majestic as it was devastating.

Its been four years since HEALTH released that cover and even longer since the band’s last album, 2009’s Get Color. That record moved away from the chaos of their debut, pushing the disco feel, only the mirrorball was made up of jagged pieces of industrial machinery, not smooth glass. Naturally, much of the anticipation for the eventual follow-up focused on whether they’d continue that trend. To clear up any speculation, they hired dark ambient composer The Haxan Cloak to produce and a Kanye/Beyoncé vet, Andrew Dawson, to engineer the sessions. The group reportedly rerecorded the album a few times, and the combination of long gestation, their work on a largely ambient video game soundtrack, and a push further into traditional electronics resulted in Death Magic, an album that sounds as if someone looked at that android triceratops and decided to upgrade it by taking off some of the weight and losing the horns. It’s not entirely without destructive force; it just trades a good deal of it in favor of sleeker focus.

Perhaps the biggest difference comes in the percussion. On previous albums, and especially in HEALTH’s live shows, Benjamin Jared Miller’s drumming (with added tom work from multi-instrumentalist Jupiter Keyes) used overwhelming force while also blurring the lines between machine-like precision and volatile bursts of purely human intensity. Too often on Death Magic the percussive elements are either produced electronically or pushed so far back in the mix that they’re sapped of strength and energy. There’s a stronger focus on Jake Duzsik’s vocals, too; the Zoothorn and the shrieking are largely gone, and instead bleak, heartbroken lyrics dominate. “It’s not love, but I still want you,” Duzsik repeats on the shallow disco of “L.A. LOOKS”. “Love, love, love/ Is not enough,” he goes on “VICTIM”. “And we both know love’s not in our hearts,” he adds on the slow-stepping “STONEFIST”. The added spotlight on his lyrics reveals their lack of shading, whereas in the mire of machinery of HEALTH or Get Color, they gained some allure in their mystery.

When the noise and live drumming do show up, they differentiate the constant stream of industrial electronic darkness. “MEN TODAY” opens on one of Miller’s trademark thundering rolls, followed by bursts of howling noise mixing in and out of the controlled vocals. Here, Duzsik acts as the chilled air in the eye of the storm. “COURTSHIP II”, a sequel to a track from their debut, comes unhinged. Miller lays down a heartbeat pattern, and Keyes and bassist John Famiglietti interrupt it with heavily affected squall, and then Duzsik’s lighthouse vocals guide things back to an approachable shore.

There’s a locked-away sadness to Death Magic’s deadened, industrial take on electronic music. It’s club music for those not focused on the dance floor itself, but the emptiness lying beneath the gestures of having a good time and being with people and hooking up, not to mention the lingering depressed hangover — don’t forget, there are songs called “SALVIA” and “DRUGS EXIST”. That sort of stance works best, though, with some sort of musical catharsis, some visceral release. Instead of exploding, the album passes by, steely-eyed and grim. By all accounts, that malaise doesn’t carry over into HEALTH’s live show; a recent residency at The Echo in the quartet’s hometown garnered rave reviews. That could be due to the fact that Miller’s live drumming comes through stronger in person, or to the massive volume being pumped through the speakers, or their reliably intense performance style. Or it could just be that all the dancing bodies bumping into each other gives this album the physical life it needs.