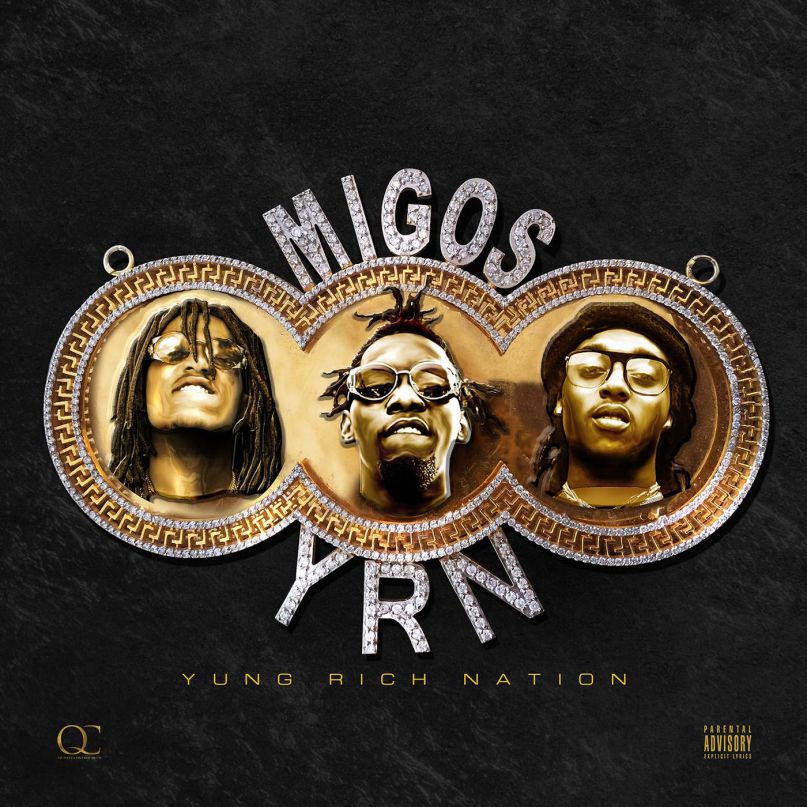 On “Highway 85”, Migos position themselves as the millennial N.W.A. Quavo kicks off the track in the cadence Eazy-E uses on “Boyz-n-the-Hood” before launching into a similarly narrative-driven song. It’s a big deal to compare yourself to the most influential hip-hop group of all time, and an even bigger deal if you can back it up.

With their debut album, Yung Rich Nation, Migos come close to doing just that. There simply aren’t any rap groups doing what Migos are doing right now, and not for lack of trying. You’d be hard-pressed to find anything in rap today aped more than the Migos flow, the number of chorus-driven rap songs has risen exponentially since “Versace” and “Hannah Montana”, and the group’s reckless behavior has made them a media mainstay and assisted in making Atlanta the new headquarters of gangsta rap. Even Migos themselves have to admit “gangsta rap is back,” and while that conjures images of helter-skelter street violence for some, for others it’s a way of life and a means to an end. Migos are giving a voice to those who don’t have the means to make their own struggles heard.

The trademark of Migos’ projects so far has been the infectious hits, “Versace” and “Fight Night” among them. Yung Rich Nation is no exception, but it doesn’t rely on just one or two tracks to draw you to the entire album. Pre-release songs “One Time” and “Pipe It Up” lacked the immediacy of Migos’ past hits, and that’s perfectly acceptable. The peaks may not be as high, but there aren’t deep valleys, either. By and large, this album flows together better than any of the group’s mixtapes. Migos have established themselves, garnered an immense fan base, and carved out a niche in a genre where everyone is trying to make their own lane. Now it’s time for the quality of the whole to shine over the quantity of the singles.

Honorable C.N.O.T.E. takes the lion’s share of the production on the album. Zaytoven (“What a Feeling”) and Deko (“One Time”, “Recognition”) stop by for a few ATL-centric highlights, but C.N.O.T.E. is the behind-the-scenes star of Yung Rich Nation, the George Martin to the Migos’ Beatles. Speaking of The Beatles, Quavo nods to those meme-ing them on the C.N.O.T.E.-produced “Street Nigga Sacrifice”: “They say the Migos better than The Beatles/ Paul McCartney, I would like to meet him.” The group’s greatest strength is their ability to balance a sense of fun with serious moments. Their dichotomy of swaggering joy and real-world focus keeps them grounded; they can traverse the range of human emotion over the course of a song without the listener even noticing the shifts.

Opener “Memoirs” starts with a frenetic piano beat that lays the groundwork for a laundry list of memories and past misdeeds. The song finds the group recognizing and reconciling with their past while looking forward to the future. On “Gangsta Rap”, Quavo laments the lack of appreciation Migos have received for essentially making trapping a cottage industry: “We put the bando in the Wikipedia/ Still these niggas ain’t thankful.” Fetty Wap’s “Trap Queen” continues to be one of the biggest songs in the country — and not without reason — but recognizing and acknowledging the Migos influence should be mandatory. They’ve essentially become hip-hop tastemakers much like their own cosigner, Drake. But even now that they have name recognition, they’re struggling to shift the narrative of their reputation as Atlanta gangsters and establish themselves as prominent figures in rap. With Yung Rich Nation, they seem primed to get there.

Despite Migos’ flashy facade, this album is steeped in realness. The extravagance is like a coping mechanism, a luxury to be enjoyed because life is fleeting. Yung Rich Nation is a powerhouse performance from a group that was seeking to make a statement, and they’ve officially proven themselves to be more than just hit single machines. Quavo, Takeoff, and Offset have forged a bond that has created nuanced hip-hop paved with exuberance and lavishness. When all is said and done, this album will be looked at as a turning point for the trio: the moment they went legit.