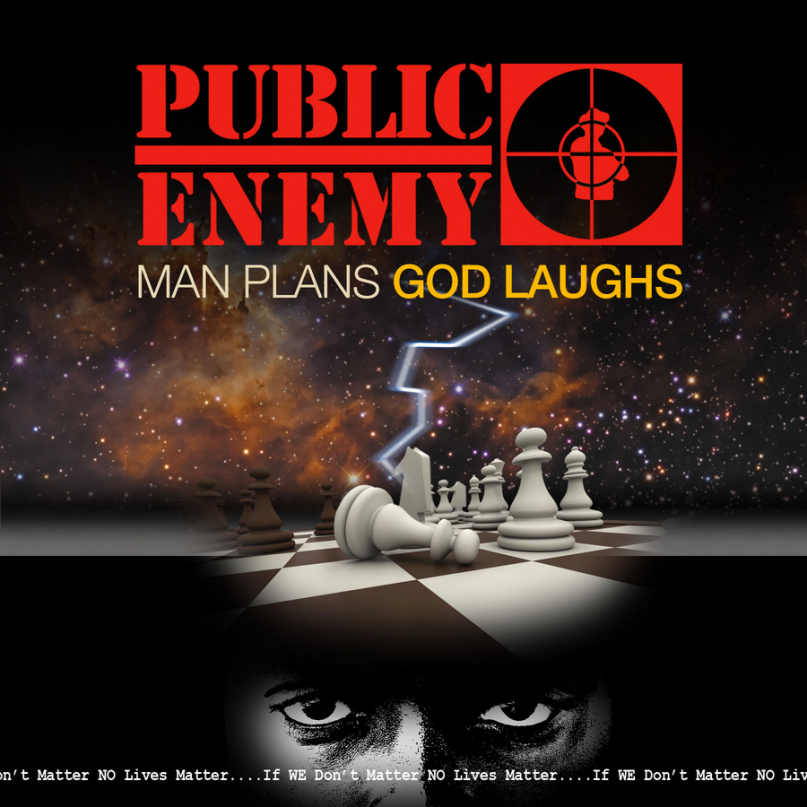 It’s not uncommon for a contemporary rapper to say they don’t want to be recording past the age of 40, so where does that leave Public Enemy? Hip-hop artists’ attitudes toward aging puts Chuck D, Flavor Flav, and co. in an inherently awkward position, seeing as they’re now three decades removed from their formation. Fortunately, they can manage. Man Plans God Laughs arrives with a unique set of circumstances. In interviews leading up to the album, the group’s best since 2007’s How You Sell Soul to a Soulless People Who Sold Their Soul?, Chuck has repeatedly mentioned being inspired by Kanye West (specifically Yeezus), Kendrick Lamar (specifically To Pimp a Butterfly), and Run the Jewels (presumably both albums, because they’re both so great). So, even if Public Enemy aren’t trying to rein in younger generations of listeners, they’re not blind to the merits of the noise those generations are already bringing.

That acknowledgment of the substance of today’s rap (explicit in the music when Chuck references Kendrick’s Black Hippy crew, for example) is a development as exciting as any in Public Enemy’s recent timeline. Another exciting development: Compared to the group’s 60- and 70-minute albums, Man Plans God Laughs is refreshingly exacting. It’s just 27 minutes long, with only two of its songs eclipsing the three-minute mark; it’s not a chore to listen to and try to grasp it. Man Plans God Laughs could have been a slab of endurance-testing ambition for the group’s latter-day era, but really, things only sound hopelessly awkward during the anti-establishment rendering of The Rolling Stones’ “Honky Tonk Women” (“Honky Talk Rules”).

Rap has become more of a finesse game since Public Enemy expanded its parameters with Yo! Bum Rush the Show in 1987, but battering-ram force still defines the group’s music. With The Bomb Squad’s Gary G-Wiz in tow to handle all production, Man Plans God Laughs has its share of explosiveness on songs like “Give Peace a Damn” and “Those Who Know Know Who”. Still, the album never feels hefty or unmanageable. It’s just a smooth distillation of everything Public Enemy are known for, from Chuck’s booming and percussive voice, to the themes of oppression and revolution, to the disorienting Bomb Squad crush. It does nothing to alienate diehard fans who’ve been riding with the group since Yo! Bum Rush the Show. It’s just a question of who else is going to hear it, of whether or not it can reach a broader audience than their last few albums have.

To be fair, there are plenty of things worth hearing here. Even after controversially defending Bill Cosby on Twitter earlier this month, Chuck remains an agreeable and purposeful lyricist. He’s not correcting today’s rappers; he’s joining them in their discourse. In doing so, his words have the weight of both experience and concern for today. He gets started right away with “No Sympathy from the Devil”: “Crazy, government created grown-up ‘80s crack babies/ Treat your ass cold ‘til the frostbite bites in December.” On inevitable single “Me to We”, he straightforwardly addresses the virtues of togetherness, risking cliché for a clear message: “We’re all relatives, human family/ No ‘I’ in team, but who we be?” On “Mine Again”, he talks about using his success as a black American to give to a malaria-infested Africa: “It’s cool to be black until it’s time to be black/ Ain’t never too late to go back and give back.” Throughout the album, his voice is charged with the intent to use hip-hop as a podium for relevant ideas, even if it means his delivery is sometimes clumsily forceful.

There are those who would argue that rappers today are closer to Flavor Flav than Chuck D, but no one, really, is saying hip-hop is dead. It’s a hard case to argue when, nearly 30 years after the emergence of the group’s tagline (and Malcolm X paraphrase) “too black, too strong,” Public Enemy have been healing from atrophy; Man Plans God Laughs is the group’s third album since 2012. “Every generation got their music,” Chuck raps here on “Lost in Space”. For rappers over or approaching the age of 50, it sets a lofty standard for socially engaged hip-hop that doesn’t let the weight of its subject matter hold down its timelessly propulsive energy.

Essential Tracks: “Me to We”, “Praise the Loud”