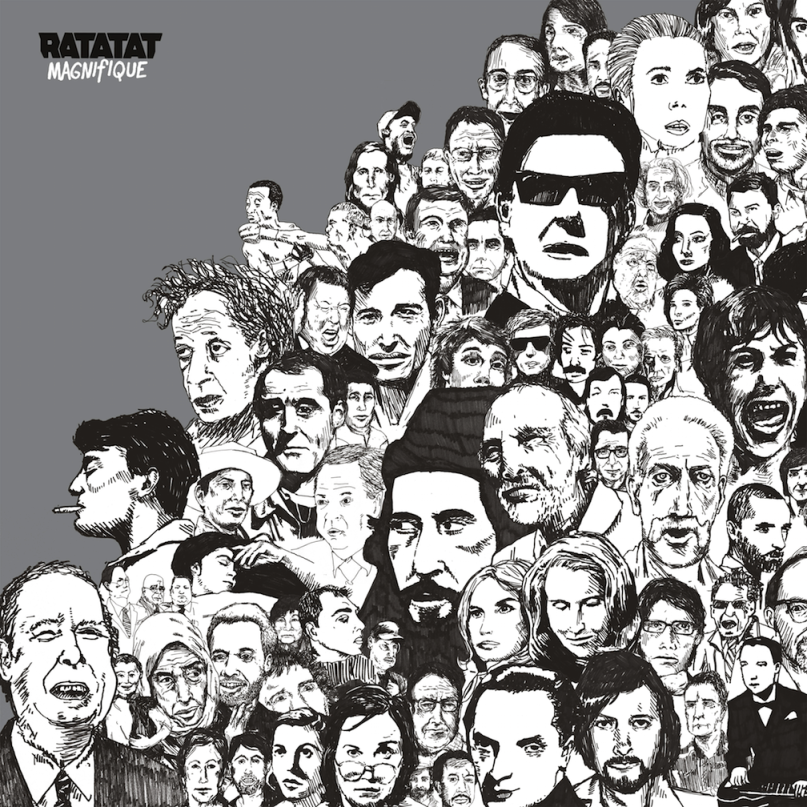 In Ratatat’s five-year absence since LP4, their fans have grown ravenous and, more importantly, visible. Mike Stroud and Evan Mast’s previous albums may have circulated in the band’s particular niche, but the instrumental electro duo are now shedding their “underrated” tag and slipping into popularity. Live, they’re just as tied to their visuals as they are their music, splashing avian psychedelics and 3D light beams like a twisted Disneyland finale. Mast also sketched the assortment of faces on the cover himself, not to mention all 4,000 drawings for the “Abrasive” stop-motion video. But Ratatat’s fifth LP ditches frills and superfluous instruments in favor of the unexplored facets of their musical essentials. Now, they’re back to the basics of layered guitar, a move that allows them to find the cohesion that their last record lacked.

Instead of shaping songs around beats like they did with LP3 and LP4, Stroud and Mast wrote Magnifique’s melodies first. Once those were sturdy, the two worked out percussion to emphasize flow. On “Cream on Chrome”, a hypnotic walking bass line breathes until waves of synth spiral downwards, rinsing it clean like mouthwash. “Abrasive” demonstrates the duo’s new writing process more clearly. From the burst of guitar harmonies to the call and response section, percussion takes the backseat in order to punch every fret forward. These moments are catchy, and their simplicity eggs listeners on.

After their last album, Ratatat struggled with perfectionism. In a recent interview, they explained that during the Magnifique sessions, the two musicians hashed out material they couldn’t help but hold a knife to. Their own creative process stressed them out to the point of tossing out 50-something tracks. That precision can be heard within each song’s miniature moments. On first listen, “Pricks of Brightness” deliberately stacks notes like a round of Jenga. Listen closely, and their nitpicking shines through: There’s a huge gap between the lead guitar harmonies and the sparse drumming, trills are cut short with meticulous care, and dimmed cymbals let each fade swell with a brighter tone.

The album’s strongest feat comes from a decision to downgrade. By leaving behind their childlike fascination with endless studio instruments, the duo gains a cleaner, fresher sound. Mast and Stroud vary textures on numbers like “Rome”, in which thin guitars are melodically stacked to fortify their strength. Instead of altering the instrument with a pedal, they recorded several guitar parts an octave lower and later sped them up for a squeaky clean sound, a technique used by everyone from Dan Deacon to The Beatles for the alien brightness it lends. The gorgeous swell of “Rome” gets its chance to shout between bedtime keys and a Simon Says guitar line, a moment otherwise glossed over. That seemingly minor decision is a testament to Magnifique’s subtlety.

Ratatat didn’t record singles for this record. The basement beer pong duo are in their thirties now, and their music has grown up, too. Five years allowed them to properly flesh out a record with cleansers between the hits. It’s not filler; these are fine details hidden in the unified whole that make the album a proper listen from front to back, hence the smooth yet dainty “Intro” and “Outro” tracks. The edges of each track fizz with lo-fi crinkling — the album starts with the sound of someone turning a radio knob and voices cutting in. Glass breaks in the back of “Countach” and bass snaps in the distance of “Cold Fingers”.

The album’s secret weapon is the southern twang of a slide guitar. First heard on “Drift”, it recalls Beirut charm more than video game tournaments, bringing to mind a carousel bobbing through a heatwave. Inspired by slide guitar players who performed on The Lawrence Welk Show, Stroud and Mast’s decision to include their own version shows their commitment to focus on the specifics without sacrificing flair. The boldest take comes in the penultimate track (and their first ever cover): an electronic rendition of Springwater’s 1972 hit “I Will Return”. The wholesome rendition twirls into a two-step later backed by quiet vocal harmonies. For an album of dial turns from hits to breathers, their cover adds class to their usually unruly full-lengths.

The precise beauty of their production work, specifically the refusal to dump gratuitous instruments into the mix, places Magnifique at the top of Ratatat’s catalogue. Stroud and Mast let guitars beat at the album’s heart, and their balance of bubbly and peaceful elements ushers a return too fluid to ignore.