Titus Andronicus – The Most Lamentable Tragedy

An audacious, 93-minute rock opera that demands to be read as a text 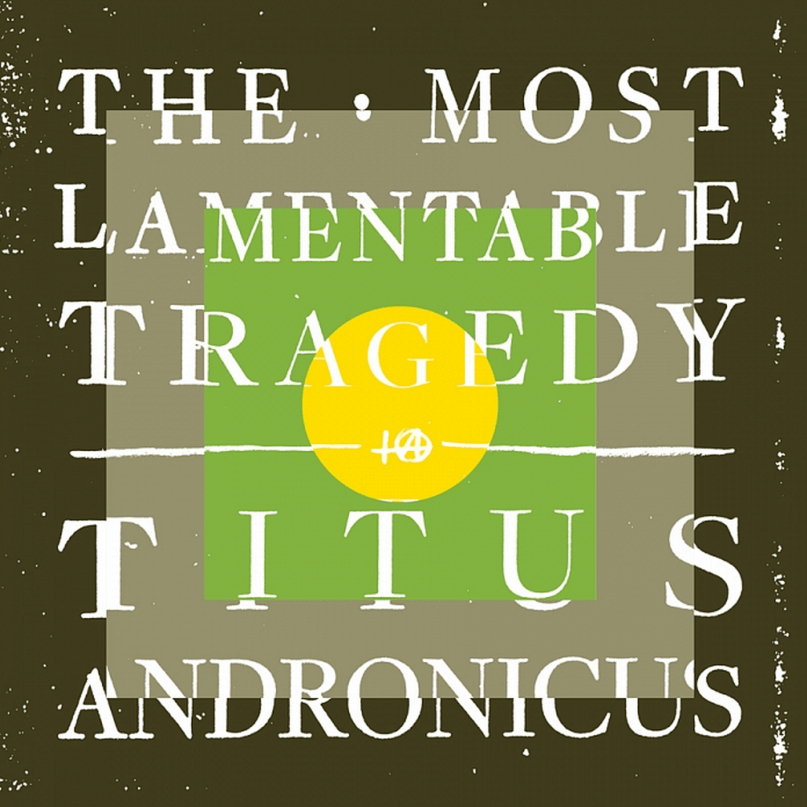 The full name of Shakespeare’s messiest, most violent work is The Lamentable Tragedy of Titus Andronicus, which seems like something of an understatement by the time the curtain falls on the play’s climactic bloodbath. Though written by the world’s preeminent dramatist, Titus Andronicus is not without its flaws. Clumsy, verbose monologues hold up the action, and the play’s barbarity borders on unbelievable. In one iconic scene, for instance, Titus tricks Tamora into eating her own sons, whom he has conveniently baked into a pie. Titus Andronicus is not a perfect play, but it is the perfect namesake for a New Jersey punk band with its own penchant for messiness, grandiosity, and diving heart-first into moral hell.

The heart in question belongs to Patrick Stickles, a singer-songwriter whose various small tortures include manic depression, self-loathing hipsterdom, and a selective eating disorder. In the vein of rock stars immemorial, Stickles is also tortured by his own success. Titus Andronicus followed up the modest triumph of 2008’s The Airing of Grievances by digging deep into the American psyche and drudging up an epic Civil War concept album that ranks among the best rock records of the last decade.

The Monitor changed Stickles’ life for good, transforming him from basement musician to big-picture philosopher and permanently raising the stakes for whatever came next. Maybe that’s why 2012’s Local Business, despite being a fantastic record in its own right, seemed like something of a letdown. On it, Stickles turned inward, confronting his own demons instead of his country’s and solidifying his reputation as punk’s foremost confessional songwriter.

“Confessional” is not quite the word to describe the latest (and perhaps the last) album from Titus Andronicus. Shakespearean in scope and just as messy as the band’s namesake, The Most Lamentable Tragedy is a 93-minute rock opera that strives to be the most of everything. It’s the band’s loudest, longest, and (somehow) leanest record yet, a there-and-back-again journey into the mind of a manic depressive that rarely fails to enthrall. Early reviews have cited The Who’s Quadrophenia and Hüsker Dü’s Zen Arcade as obvious influences in terms of ambition and subject matter, and it’s true that rock operas have long provided a launching point for trips into the mind’s darker recesses.

But a better reference point might lie in the world of poetry. In creating an imaginary character (Our Hero) who wakes up with the “crushing ache” of depression and goes on to suffer through the highs and lows of an unstable mental state, Stickles has provided the listener with a window into his own soul. It reminds me of John Berryman’s Dream Songs, another monumental work that tackles depression in a way that both embraces and resists the confessional mode. Berryman’s Henry has a “friend” or alter ego who goes by Mr. Bones, just as Stickles’ Hero has a Lookalike who may or may not be antagonistic.

On its face, it might appear silly to compare a punk rock album to a seminal work of poetry, but Tragedy doesn’t just invite such comparisons — it practically begs for them. The album is structured like an actual tragedy, with five acts that trace Our Hero’s battle with manic depression and courtship of a woman named Siobhán. It’s also littered with enough literary and musical allusions to warrant a 100-page index. Just like R.E.M.’s “It’s The End Of The World”, “No Future Part IV: No Future Triumphant” starts with an earthquake, and its images of “flesh that roasts on smoldering coals” and “blood that flows from broken nose” strongly evoke William Blake’s “London”. It’s a challenging song that encompasses everything great about Titus Andronicus in that it manages to be extremely fatalistic and yet strangely uplifting.

(Interview: Who the Hell Are Titus Andronicus?)

To understand everything about this album requires a working knowledge of English literature, Greek mythology, and Australian punk rock, but you don’t really need any of the above to enjoy this album for what it is: a batshit crazy rock opera about what it’s like to be batshit crazy. Act I’s “Lonely Boy” and “I Lost My Mind” are rollicking, bluesy romps that take up the mantle of the antisocial in a way that’s a lot more fun than actually being antisocial. If you got into punk because you’re a misanthrope who still wants to get down every once in a while, these tunes will speak to you.

Stickles understands that being manic depressive by its very definition means coping with the highs and the lows, and he provides plenty of both. They arrive simultaneously during the album’s finest stretch, a four-song sequence in Act II that begins with “Mr. E. Mann” and ends with “More Perfect Union”. (The title of “Mr. E. Mann” might reference “(I Am The) Electric Man” off Local Business, while “More Perfect Union” definitely references an earlier song off The Monitor.) This stretch finds Titus Andronicus firing on all cylinders, though it’s most remarkable for its contradictions. “Fired Up” attacks religion with what can only be described as religious zeal, while “Dimed Out” is a thoughtful meditation on excess from the viewpoint of the id. The latter song is the album’s first single, and it makes sense. “Dimed Out” is both a vision of the band’s rough-and-tumble past and a mission statement for its locked-in present. Everything is set to 10; if it weren’t, this wouldn’t be Titus Andronicus.

Of course, extreme indulgence might not be everybody’s idea of a good time, which is why some listeners will have trouble weathering 9-minute epics such as the Pogues-esque “More Perfect Union” and the purposefully oblique “(S)HE SAID / (S)HE SAID”, whose flexible pronouns invite all manner of interpretations. But this album isn’t necessarily for everybody. It’s trying to the point of exhaustion when taken as a whole, but the sequencing ensures a continual stream of pleasures for those with the time and effort to give.

The love story of the album’s latter half, for instance, marks a bright point before Act V’s descent back into the “dungeon” or “mine” alluded to in Act I. “Come On, Siobhán” invokes both Dexys Midnight Runner and Bruce Springsteen with its earnest plea to give love a chance, proving that even Stickles has a soft spot in his polluted heart. It’s followed by a cover of “A Pair Of Brown Eyes”, which doesn’t quite do The Pogues justice but will bring a tear to the brown eyes of anyone who remembers Titus opening for the Parting Glass tour in 2011.

Of course, insanity wins the day, as it should on a record that stretches beyond the 90-minute mark and recalibrates the boundaries of what might be possible in punk rock. Stickles recently told Grantland that Tragedy might be his band’s last album, and if it is, he’s certainly done enough to be talked about in the same breath as the genre’s stalwarts.

This is music that wants to be read as a text, and deserves to be. The fact that it comes to us in an era of smartphones and shortening attention spans only serves to underscore its audacity. I’m reminded, once more, of Titus Andronicus the play. It’s messy, it’s ugly, it’s borderline barbaric. And yet it endures. Whether or not the final, sustained note of “A Moral” is the last we hear of Stickles and co., their career can be summed up in three words: Titus Andronicus forever.