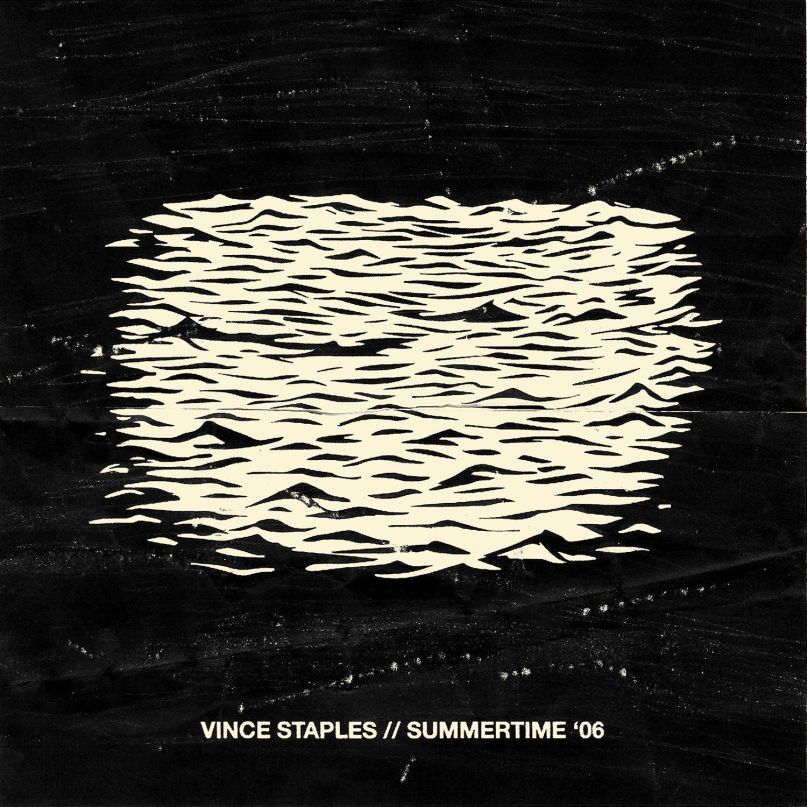 No matter how nimble their flow, rappers have to breathe. There’s an audible drawing in of air between lines, a breaking point between bars. At moments on Vince Staples’ Summertime ’06, that breath seems like a desperate gasp, like the Long Beach MC just spit up something dark and oily. Alternately, there are times when it seems he has no need for air, walking slowly, zombie-like, through the brutal reality of his life. The 21-year-old phases in and out of the present, pulled back under the waves of gangster business and neighborhood dangers of his youth, then breaking back through the surface long enough to reach for the sun. Nostalgia can be a scary thing, and listening to Summertime ’06 is like feeling its shadow contort behind you with every step.

That blurring of reality hits home hardest on “Jump Off the Roof”, near the end of the first half of the nearly 60-minute double album. The song is laced with multiple sources of potential redemption, but always hinging on the threat of death. “I pray to God ’cause I need him,” Staples begins on the hook. On the bridge, he teams with Snoh Aalegra to cry out for the woman he’s broken up about. Throughout the verses, he deals with the twin specters of drug addiction and addiction to a tainted relationship, but on that hook, the smear of pain and obsession overpowers the gritty detail that he conjures elsewhere: “Life way too hard, am I dreamin’?/ Highway to hell and I’m speedin’/ One way to tell if I’m breathin’/ On three, let’s jump off the roof.” Like a lucid dreamer, he’s about to test the reality of his experience, only this is no dream. It’s a stirring way to posit the self-destructive potential of the lifestyle, and especially sympathetic in the way he introduces the listener into that jump. “Let’s jump,” he beckons, pulling you deeper into ’06 and the dark world it represents.

True to a rap world in which fragility informs music as much as bravado, this album is infused with heartbreak, desperation, and anxiety. The Auto-Tune on “Summertime” sounds like Staples is wearing a nose-clip, but he still peppers poignant lines into the lovesick ballad. “They never taught me how to be a man/ Only how to be a shooter,” he sings, apologizing. “This weight is on my shoulders, pray Jehovah lift me up/ And my pain is never over, pills and potions fix me up,” he begs on “Lift Me Up”. The chill-inducing “Might Be Wrong” pairs a phone call from Haneef Talib, presumably in prison (“Hands up, don’t shoot — shot,” he seethes before the call gets interrupted by a block inspection), with a mourning chorus lingering at the edge of right and wrong, life and death.

But it’s not all depression. Sometimes the claustrophobia comes in the cluttered beats and grimy details. On “Surf”, amid throbbing bass, off-kilter, tinny percussion, and slashes of horn-like synths, Staples drops lines like “More black kids killed from a pill than the feds in the projects/ In the Planned Parenthood playin’ God with ya mom’s check/ You ain’t even been to prom yet” without expecting anyone to bat an eye. “They found another dead body in the alley,” he notes through a cloud of smoke on “Birds & Bees”, taking a breath only to blithely repeat himself, as if adding another body to the count.

Former Kanye mentor No I.D., DJ Dahi, and Clams Casino handle production on the album, but they work together with Staples so that the seams between the different dreams, hallucinations, memories, and nightmares don’t show. Stories of childhood gang membership, of his father’s drug dealing and incarceration, of addiction and pain and fear roll together like clouds of smoke thanks to the unified but varied production.

Staples is aware of his growing reputation in rap and the power he might wield. In a moment of clarity on “C.N.B.”, he calls it out himself: “I wake up feeling like I am the coldest nigga breathing,” he dead-eyes, going on to eviscerate the institutionalized racism of America. “The sheets and crosses turned to suits and ties,” he spits, later adding that “we gentrified, we victimized, we fighting for survival.” Summertime ’06 might be the sound of Staples exorcising the demons of his past, but “C.N.B.” makes it clear that he’s taking in today’s world, and he’s appropriately enraged. “My teachers told me we was slaves/ My momma told me we was kings,” he notes in “Summertime”. “I guess we somewhere in between.” Parsing generations of pain can be difficult and unwieldy, but Staples’ vision makes his whole history feel present all at once.