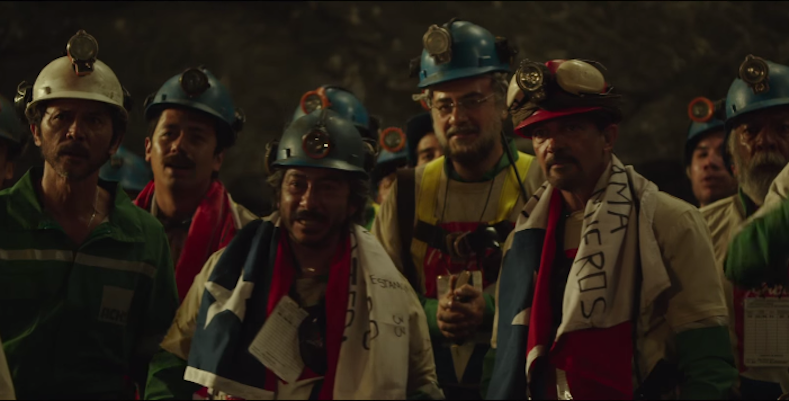 Many of us probably remember the 69 days in 2010 when the eyes of the world were fixated on Copiapó, Chile. A 120-year-old copper and gold mine experienced a massive cave-in that trapped 33 miners 700 meters underground. In an unbelievable story of true resilience and world unity, a massive rescue operation was undertaken, resulting in the rescue of all 33 men.

Now, director Patricia Riggen (Girl in Progress) has dramatized the harrowing events in a new film dubbed The 33. Starring Antonio Banderas, Rodrigo Santoro, Juliette Binoche, James Brolin, and Lou Diamond Phillips, the movie reveals the largely untold personal stories of the individuals involved in all aspects of the event. Set for a November 13th release from Warner Bros. Pictures, the first trailer has been released online. Check it out below:

“In 2010, the eyes of the world turned to Chile, where 33 miners had been buried alive by the catastrophic explosion and collapse of a 100-year-old gold and copper mine. Over the next 69 days, an international team worked night and day in a desperate attempt to rescue the trapped men as their families and friends, as well as millions of people globally, waited and watched anxiously for any sign of hope. But 200 stories beneath the surface, in the suffocating heat and with tensions rising, provisions—and time—were quickly running out.

A story of resilience, personal transformation and triumph of the human spirit, the film takes us to the Earth’s darkest depths, revealing the psyches of the men trapped in the mine, and depicting the courage of both the miners and their families who refused to give up.

Based on the gripping true story of survival—and filmed with the cooperation of the miners, their families and their rescuers—“The 33” reveals the never-before-seen actual events that unfolded, above and below ground, which became nothing less than a worldwide phenomenon.”