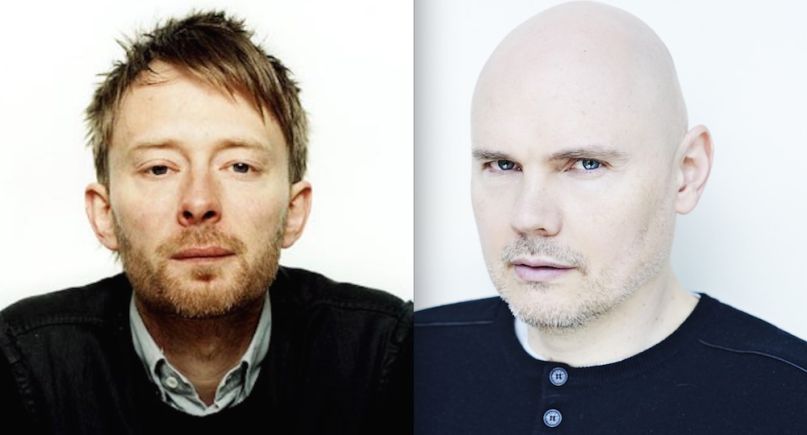 Smashing Pumpkins are currently on the road touring the US alongside Marilyn Manson. Their gigs thus far, much like their latest Monuments to an Elegy LP, have been well-received, with our own Contributing Editor Philip Cosores giving the band a glowing review earlier this month.

Still, during a recent interview about the trek, frontman Billy Corgan took the time to highlight to another rock act: Radiohead, whom he described as “the last band that really did anything new with the guitar.”

Corgan’s comments came up amidst a discussion on modern-day music. Though his words sound like praise for Thom Yorke & co., they also seem to double as a bleak rundown of today’s alt rock landscape. “If you look at most alternative rock music in 2015, it hasn’t really evolved for 20 years,” the frontman says.

“We get our asses kicked by EDM or some of these artists that are more keyboard and drum machine and reverb. They’re engaging in new technology. Guitar isn’t new technology—there are only so many ways you can warp it around. Radiohead was probably the last band that really did anything new with the guitar.”

The world isn’t entirely devoid of promising acts, however. Later in the interview, he credits both Queens of the Stone Age and Royal Blood for doing their best to carry the torch:

“If all you hear is pop and all you see are perfect performances and everybody smiling, to actually see a band invoke a darker spirit on stage and conjure it right in front of you in a mass of power you can’t explain, that is quite rare to that audience. No band in the past 15 years has come along and figured out how to do that. Most of the bands you can point to that have been successful that still do that, like Queens of the Stone Age, they’re coming from an earlier generation of power and an earlier language, even though they’re having contemporary success. There are some flashes, like a Royal Blood or something, where they’re trying to figure that power out, but they’re dealing with an audience that is so predisposed to pop.”

Elsewhere in the discussion, Corgan talks about the Pumpkins’ latest incarnation and how it’s important for fans to realize they’re not what they used to be some decades ago, likening the band’s evolution to a Spider-Man franchise reboot. Read the full interview here.