Brooklyn punks eulogize a legend and confront their own exhaustion. 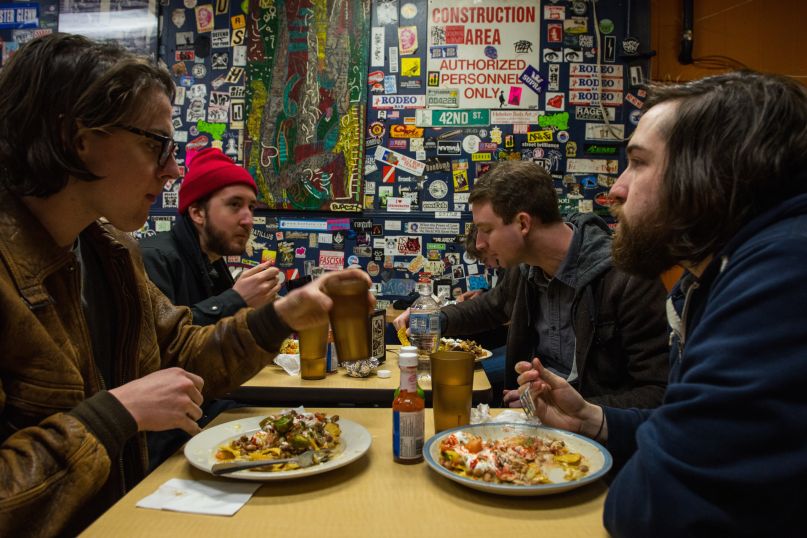 Doubting Thomas Cruise Control may be the best definition of a 21st century college rock band. Forming in 2010 while attending Fordham University in the Bronx, the group moved to Brooklyn after graduation. Their witty and introspective take on songwriting, spearheaded by frontman Bobby Cardos, led to a prolific output of singles, cassettes, and their debut album Builds. Already this year, DTCC released their Moonchild/Jailface split with Slushies, and now they’re finally releasing a sophomore LP. Before the record hits stores on August 14th via Fleeting Youth Records, the band has offered a preview in the form of “Lenny Bruce”.

The track opens with hollow and disenchanted electric guitar chords. Cardos’ voices creaks in, sounding like it could break into a scream at any moment but never does. For seven minutes, the track builds with rampaging guitar solos and downtrodden drum rhythms, both eulogizing the song’s namesake and also aptly capturing a feeling of vulnerability and inadequacy. The length of the song only adds to the exhaustion the band is trying to express, throwing themselves into a seemingly endless and gorgeous jam session.

In a statement to Consequence of Sound, Cardos explains the song’s winding origins:

“When Robin Williams died I wanted to watch his stand up, but couldn’t find a special on Netflix and came across the documentary Looking for Lenny, which he was credited as being in. Unfortunately he was only in it for about 30 seconds (for some reason Henry Rollins had like 5 minutes of screen time? Who let that happen? Has Henry Rollins ever laughed? If he has, I haven’t seen it).

“But they talked about how Lenny Bruce would sneak recording equipment into his profanity hearings because he was paranoid that they were manipulating the court transcripts, and how a lot of people think his death photo was staged to make him look like a huge junkie and discredit his work. And that may be true, but there were also a lot people around him who knew how bad he was getting mentally and seemed to feel helpless in terms of what to do. I’ve felt that way with friends (not with anything as hard as heroin, fortunately), where I sense something’s wrong but am not sure what to do about it, and also don’t feel in a position to say something because I’m not exactly a picture of sobriety either. That’s a tricky thing about living in a city like New York, where there isn’t as much stigma around drugs/alcohol. You can do those things a lot and not be an addict, but some people are and that juxtaposition within a group of friends is difficult to navigate. And when are you letting someone down by treading lightly, and is it for them or for you?”