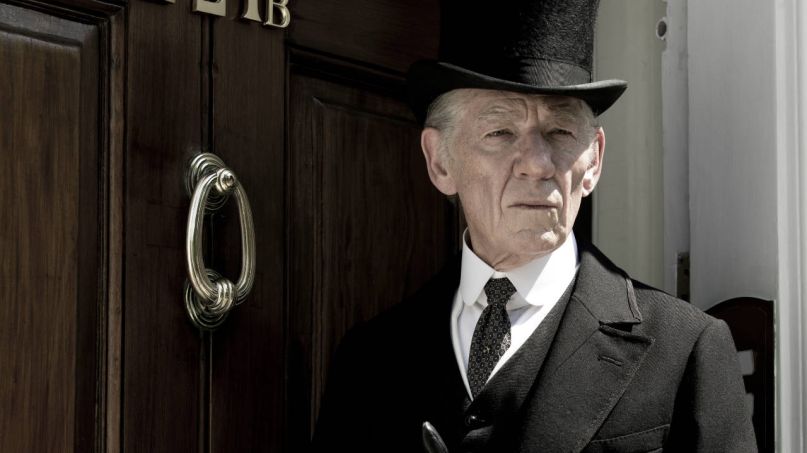 Mr. Holmes is about a very different kind of Sherlock Holmes, one far removed from the sass of the Guy Ritchie movies or the above-it-all pulp intellect of the contemporary BBC series. This is about Holmes in his closing phase, at the age of 93, when the wry intelligence that’s always characterized the detective is just about the only faculty he has left. Holmes, as played by peak-form Ian McKellen, is starting to break down. Despite his gentler lifestyle (he’s taken up residence in a quiet Sussex village by the sea) and diversions like his recent penchant for beekeeping, Holmes’ many years of far-flung travel and constant work have left him the kind of aging man for whom moving around independently is a notable victory.

Here is a deceptively sublime film, one which begins by approaching an artist of a different kind in his late period, one who believes acutely that “one shouldn’t leave this life without a sense of completion.” When he’s not occupying himself with his current burden, an unsolved case involving a wayward housewife that’s weighed on Holmes for over 30 years and the one that pushed him into what he declares a premature retirement, Holmes spends time with his housekeeper’s son Roger (Milo Parker) while dodging Mrs. Munro (Laura Linney) herself. Roger is a curious boy, one who exhibits at least a few of the keen investigative instincts for which Holmes has long been famed, and the two bond over bees and life lessons alike.

There’s a playful impishness to McKellen in these scenes that powerfully underscores so many of the film’s more tortured moments. Most come when Holmes has to be alone with his regrets and his memories, the latter of which are increasingly starting to fail him. Mr. Holmes stands as yet another bravura performance on the actor’s lengthy resume, one that sees him digging into not only the Holmes mythology but also the inevitability of aging to find a keen intellect beginning to turn on itself, and what this would do to a man whose entire defining characteristic in life has been his mind. And yet, for the film’s moments of exhausted sadness, the old Holmes still peeks through when he and Roger conspire to keep a new line of inquiry from Mrs. Munro or when the mention of a “miracle tonic” cure known as Prickly Pear leads the good detective to titter just a bit at the syllable “prick.”

The mystery at the center of Mr. Holmes isn’t the typical Sherlock mystery because it introduces a new wrinkle to his famed process: senility. Holmes jokes about it with Mrs. Munro and Roger, but quietly fears it all the same. Director Bill Condon approaches Holmes’ process in his late years as a constant struggle against the receding shoreline of human memory, and his case as a series of fragments that jump between the case of the forlorn housewife itself, his modern life, and another case concerning a mysterious Japanese man (Hiroyuki Sanada) with a keen interest in Holmes. The glow of Holmes’ memories stands in contrast to the quiet tableaux of his village life. The case itself is complicated by Holmes’ inability to recall every detail of the case at all times; now, Holmes is as much an uncontrolled variable in his work as any other. Given that solitude and the inevitability of time are Mr. Holmes’ two most lasting preoccupations, Condon more than ably captures a life nearing its end that sustains itself with the power of immovable memory. When it can.

Certainty has always been essential to the Holmes legend, and for Mr. Holmes, its relationships with doubt and deceit exist at the fore. Holmes has long been considered a very specific kind of hero, largely because of the pop cultural depictions of his work over the years, and at points the film acknowledges that these were more in-hindsight fabrications created by longtime compatriot John Watson than an actual chronicle of Holmes’ adventures. The bit of his older process that Condon allows to show through is a much sadder kind of investigation, one that looks a lot more like standard, wearying police work than the larks so characteristic of the Holmes legend. Holmes may have worked in a different time, but the sins of the world haven’t changed.

Mr. Holmes speaks volumes about the man through small details: a fall from bed, a pair of bees encased in a glass paperweight, a glove in a long-forgotten drawer. The film deconstructs the legend from a perspective so potent that one starts to long for other films about aging heroes that view their subjects in more vulnerable times, and with the lack of sentiment that McKellen finds. Holmes is many things: a genius, a prickly malcontent, a keen investigator, a fair-weather friend, a father figure, and indeed, to some he is a long-lost memory in their own lives who exists at fixed points in time but will one day disappear. Before long, Holmes himself will disappear, and his mind and memories with them. This, unlike any other obstacle he has ever found in life, cannot be outwitted.