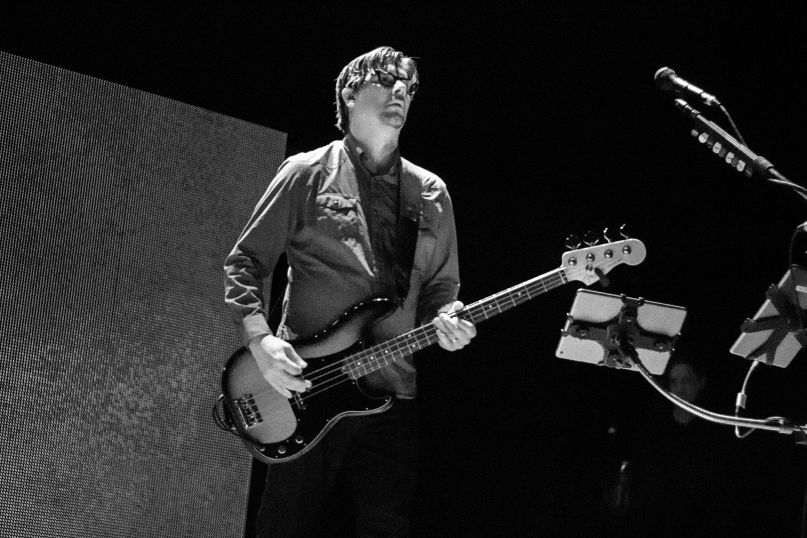 People asked why I was going to Lawrence, Kansas. I said I was going to see a band called Failure. Nobody had heard of them. “They’re a ’90s band that just reunited,” I told them. “Kinda grungy, dude sounds like Kurt Cobain.” Little did they know, the show — the first of the tour, at the classy Liberty Hall — nearly sold out. And every single person in attendance was stoked to be there, having waited two decades for them to return.

Failure were the black sheep of the grunge movement, back when major labels signed every white-guy band playing distorted guitars. In fact, it’s unfair to lump the band in with the other bands of the era (except for maybe Hum). Even though Andrews’ voice sometimes bears an uncanny resemblance to Cobain, Failure were too heady and too spacey to have a radio hit like the Nirvanas and the Pearl Jams. Instead, their best albums, 1994’s Magnified and 1996’s Fantastic Planet, found their way into the collection of record nerds who could appreciate Andrews’ intricate production and those cathartic individuals who got off on the band’s particularly dour mood. True to their name, Failure’s music isn’t necessarily a good time. It’s heavy (along with the Melvins, they appealed equally to metal fans and the alt-rock crowd), and there’s a specific downer tension to Andrews’ songwriting. But to the disappointment of their cult fanbase, Failure broke up after Fantastic Planet, going out with their best record.

Nearly 20 years later, the core trio of Andrews, guitarist/bassist Greg Edwards, and drummer Kellii Scott have reunited for a new record, The Heart Is a Monster, and a lengthy North American tour that kicked off last night deep in the Midwest. The set promised both old and new songs, and based on the intense sound check and plethora of iPads, projection screens, and other electronics on stage, it was to be a full-on production.

The band opened with Heart cuts “Hot Traveler” and “A.M. Amnesia”. Living up to their reputation as sonic perfectionists, the live mix sounded powerful and distinct, blaring Failure’s heaviness without muddying up the vocals or leads. And Andrews was in fine form vocally, holding his notes and projecting just like he does on record. Visual performers Failure are not. Andrews and Edwards don’t move around much, and except for the fractal visualizations on screens behind each member, their stage show amounts to mostly standing and playing their instruments. This puts extra pressure on the band musically, because that’s all they have to engage the audience. One stray note could break the spell.

But there wasn’t a single fuck-up, and Failure held down a tight hour-and-a-half set, eventually delving into the back catalog. The bass line and chorus build in “Frogs” woke people up after local opener Sundiver’s lulling set, and “Saturday Saviour” became a mass sing-along. Of course, Fantastic Planet staple “Stuck on You” went over well after the encore break, as it was the closest they ever came to a hit single, charting on the alternative charts back in ’96. The new songs don’t have the nostalgia behind them, and the crowd was noticeably less receptive to them, but I was impressed with how well the band filled out the arrangements — a credit to all those gadgets and Edwards’ ability to paint texture upon texture with his guitars and pedal array.

If Lawrence is any indication, the remaining dates on this tour will be damn impressive (aforementioned scenemates Hum join it next month, completing one of the best bills of the summer). Failure are no slouches. Their show requires the kind of orchestration that comes from years upon years of expertise. It isn’t just three guys playing instruments. There’s just as much going in the background and before the set regarding gear and technical setup. Failure wears a smug LA suaveness, and why not? Few bands can back up their studio recordings this well in a live setting.