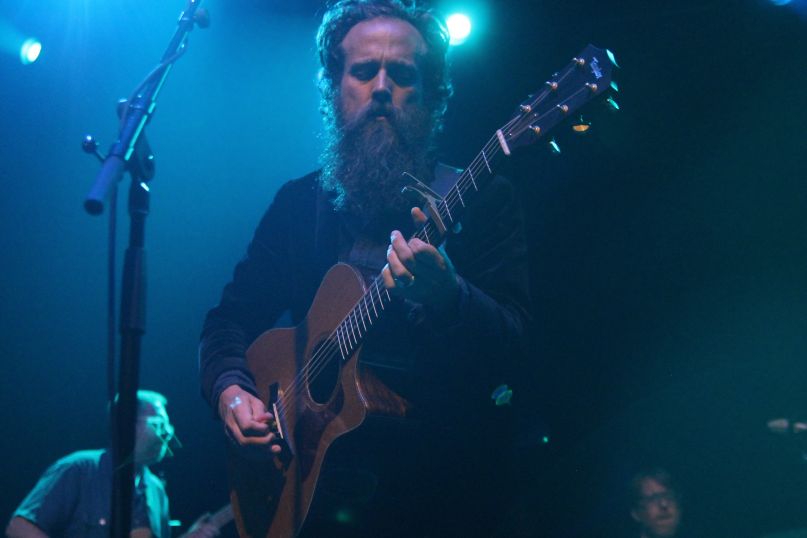 There’s a certain yin and yang to Iron and Wine and Ben Bridwell’s live performance. Iron and Wine (Sam Beam’s namesake) plays the reserved folk troubadour, while Bridwell serves as the energetic rock ‘n’ roller. The two contrasting styles gave balance and variation to a set that spanned Iron and Wine, Bridwell’s Band of Horses, and the bevy of covers the duo just released on Sing into My Mouth.

The noticeable chemistry between the two singers was on full display for a sold-out crowd at Webster Hall last night. With the vocalists trading off lead duties and harmonies (and with plenty of grins between songs), it was easy to see that there were no inflated egos; these were just two friends grateful and enthralled to share the stage. On one of the most recognizable tracks from the covers record, Talking Heads’ “This Must Be the Place (Naïve Melody)”, a hushed sing-along floated through the crammed venue before the crowd erupted into loud cheers at the end. And on “The Straight and Narrow” (a Spiritualized cover), Beam and Bridwell matched each other’s efforts evenly as their voices intertwined for one of the strongest songs of the night. This inherent trust in each other’s abilities also manifested itself in certain song choices – for instance, Beam took lead vocals on Band of Horses’ “Window Blues” while Bridwell took charge on Iron and Wine’s “The Sea and the Rhythm”.

Bridwell’s stage presence was another highlight of the gig – he pours an extra bit of oomph into his distinct enunciations and delivery while singing in a way that recordings just don’t do justice. While Beam anchored his spot with minimal movement, Bridwell was bouncing up and down, rattling his head, and frantically waving his arms at the climaxes of certain tracks.

After running through 20 songs, the band (which also featured a pedal steel guitarist, a bassist, a keyboardist, and a drummer) briefly departed. “You’re still here!” Bridwell said jokingly as they returned for the encore song, JJ Cale’s “Magnolia”. He had a smile when making that remark, but perhaps there was a brief, incredulous realization that he really had been playing covers of Peter La Farge and Bonnie Raitt and Four Tops to a packed house with his long-time friend. Last night, Beam and Bridwell delivered for the enthusiastic crowd by simply being themselves.