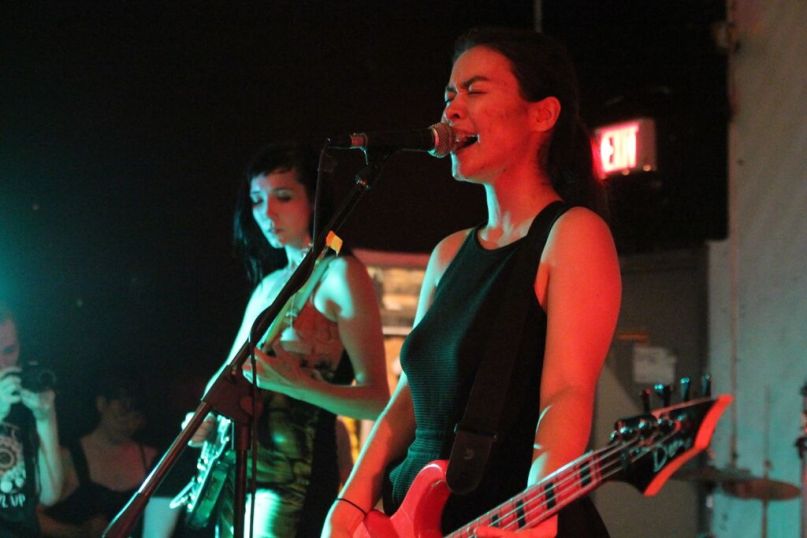 “Thank you for being here in solidarity, in the heat,” Mitski Miyawaki said to a sold-out crowd at Shea Stadium BK last night, the final gig on this tour until her appearance at Hopscotch Music Festival in September.

Summer had finally made its presence felt in New York, making for a sweltering, sweaty venue. But the hometown crowd, packed into the cozy Williamsburg spot, couldn’t have cared less about the soaring temperatures or some sharp mic feedback early on.

Mitski didn’t waste any time kicking into high gear, starting off with the hit “Townie”. The track’s brilliantly wistful opening lines – “There’s a party/ And we’re all going/ And we’re all growing up” – set the stage for rest of the night.

Throughout the set, most noticeably on “I Don’t Smoke”, drummer (and ex-Diarrhea Planet member) Casey Weissbuch used an electronic percussion pad, adding a unique contrasting sound to the reverb-filled guitars and basslines. “I Will” shifted the spotlight to guitarist Callan Dwan, whose pronounced riffs stood out even more, as the Bury Me at Makeout Creek version of the track only features a bass-keyboard-drums arrangement.

But most of all, the concise 10-song set showcased Miyawaki’s wide range of singing styles, from the distant, subdued vocals of “I Don’t Smoke” to the howls of “Drunk Walk Home”.

The latter drew the biggest response from the crowd, beginning with its sparse drumbeat and followed by the heavy, driving guitar riff. “Fuck you and your money,” Miyawaki seethed. “I’m tired of your money.” Finally, Miyawaki’s screams, raw and resonant and cathartic, emerged above the cacophony to an equally loud roar of approval from the fans.

Afterwards, Miyawaki’s bandmates ceded the stage, and the singer performed “Class of 2013” and “Last Words of a Shooting Star” solo while also taking over guitar. A hushed sing-along (“I always wanted to die clean and pretty”) floated through the stifling venue. In the crowd, there were some visible tears (and a lot of visible sweat). A quick smile, a short bow from Miyawaki, and the room erupted in cheers.