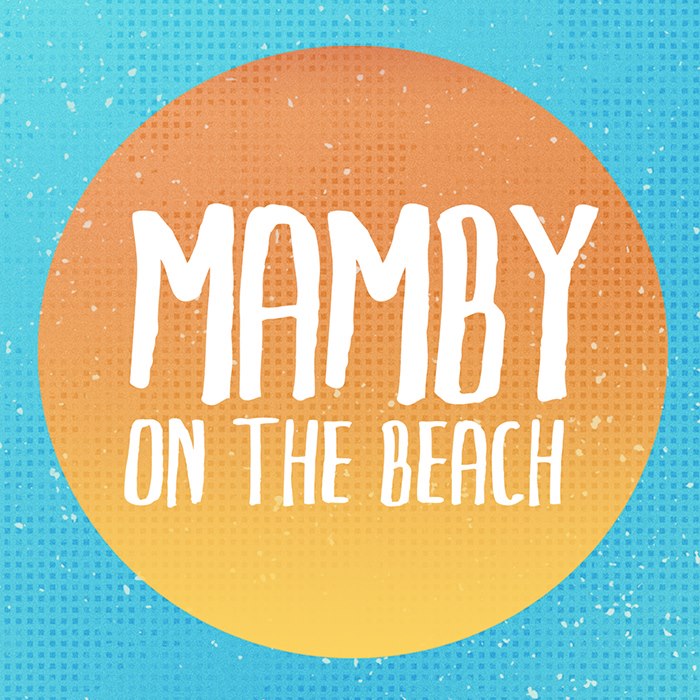 Given the loss of Wavefront Music Festival, many Chicagoans rejoiced when React Presents announced that Mamby on the Beach would fill in the void left by the beachfront festival. For two days last weekend, the summer soiree took fans south of the Loop to Oakwood Beach with free shuttles provided around Chinatown. The whole thing felt like a school field trip as a steady stream of whooping festivalgoers followed the Mamby signs from the train station to the nearby shuttle stop.

The weekend-long beachfront festival set the mood right from the start as attendees breezed through the entry to stroll past tiki heads, colorful lanterns, and graffiti’d tree protectors in a corridor of photo opportunities. Inside the festival grounds, people walked under an intricately cut wooden crest into a beach scene laden with palm trees, bamboo fencing, parasols, and beach towels, all perfected by the Chicago skyline. Three stages provided fuel for the party with house sounds ranging from the deeply melodic and sometimes dreamy to the glam-rocked and slightly bizarre  — with a healthy dose of four-on-the-floor Chicago house beats stuffed in all the right places.

In the Beach Bazaar, attendees could get henna tattoos, and even buy a small piece of the wooden crests. Manny the Frenchie made a special guest appearance for photo ops and cuddles. However, of all the food trucks, restaurants, and vendors in a city notorious for fans of deliciously artery-clogging cuisine, Mamby chose only two vendors and neither of them cared much about their products. Hungry patrons were mostly relegated to hot dogs, corn dogs, or Italian beef, while the vegetarians were stuck with cheese fries. Yet what the vendors lacked in quality, they made up for in popsicles! On Sunday, temperatures reached the low 90s and giant freeze pops, icy sangria, and cool beer helped everyone beat the heat.

The festival’s biggest asset, though, had to be the people attending. Within an hour of arriving, I had already gathered a piece of kandi from one enthusiastic girl, and had been decked out with shimmering temporary tattoos from a group intent on making everyone around them feel loved. Throughout the two-day festival, I witnessed a multitude of random acts of kindness, from girls helping each other stay in their bathing suits, to friends helping each other with sand removal tactics. Watching people display that kind of affection reminded me of the powers of positivity.

That goes a long, long way for a music festival.

With an early afternoon Saturday set, Goldroom used the cool, drizzling rain to their advantage. The mood was just right for a tropical escape from the city, and their hot synth and slow jams complimented the rain. Swinging in time to the beat, I wished I had a daiquiri in hand, but the festival offered ice cold sangria in its place. When the crowd heard the opening lyrics from their hit remix of Niki & the Dove’s “Mother Protect”, they held their hands and umbrellas up to the dreary sky and danced their hearts out. The gentle sway of an audience moving as one is the prime reason so many people seek out festivals such as Mamby, and Goldroom catered to that experience with their summer-perfect sound and beach-ready melodies.

Known for their cool summer tunes, Classixx started the beachfront festival off right by playing trance-inducing songs that became instant classics. They told me that my “dreams will come true” and they did during this set. Bringing their love of their LA home with them, Classixx blew the main stage away during a rainy Saturday afternoon. With Felix da Housecat playing behind them at The Tent, Classixx paid a psychedelic tribute to him from across the beach. Single “Holding On” got the crowd jumping and singing along near the end of their set. Their fun-loving personalities were spread to the audience, who all offered up high-fives and hugs as they moved through the crowd.

For the last set of the weekend, the synthpop outfit Passion Pit arrived to a loving audience. What began as a sweet present to a girlfriend has blossomed into a larger-than-life hero story as frontman Michael Angelakos has taken his band from a group with a cult-following to a leader among its genre. His fervent performance always blows the crowd away, and his crooning makes all the girls wish he was writing a song just for them. Single “Cry Like a Ghost” had everyone singing and clapping along: “Sylvia, right back where you came from/ You’re a pendulum.” Of course their now classic hit “The Reeling” had audience members screaming, “Is this the way I’ll always be?” If Passion Pit sticks around, then the answer is a most definitive yes.

This deep house group, born and bred in Chicago, stood out from the other locals and grabbed my attention at the small Beach House stage. A pulsing, dreamy, and at times tropical house beat, glazed over with echoing vocals, dominated the corner of the festival and provided a space for weary festivalgoers to chill on the grass, or sway in the breeze coming fresh off of the lake. A blissful moment, I only wish I could have stood in the field and grooved with The Pool House all day long. That name is hardly facetious, either, as the outfit hosted their very own party on stage by inviting members to groove with them, creating an ensemble that shared more visually with a close-knit family. Taking turns on the tables, they showed that too many cooks in the kitchen can sometimes make a superb dish.

On Saturday evening after the rain, with long hair flowing, Norwegian producer Casheme Cat added just the right amount of futuristic bass music to the beach party. His signature drops and creative remixes have caught the attention of millions and gained him snowballing fame since 2012. This was an act I didn’t want to miss, and was definitely glad I caught. Dropping 90’s classics by the Spice Girls, and local favorites by Silento, Cashmere Cat made the crowd get down and dirty in the sand by making each track yield to his distinctive sound. With three EPs under his belt, I’ll be keeping an eye out on what he does next as I’m sure his fanbase is about to increase drastically, especially if he keeps dropping sets like this in our laps.

Röyksopp has proven time and time again that they can work an audience, and the eager Mamby crowd was no exception. Hailing from Norway, the techno rock duo featured haunting vocals and surreal visuals as they owned the main stage for a perfect sunset show.  Röyksopp had every grain of sand shaking to their beats and their performance itself proved quite exemplary of their Grammy nomination, serving as a solid reminder of their techno roots. Complete with robot vocals, Röyksopp had the audience screaming, “I want you,” under the hazy skies. Mamby was their chance to shine, and they most certainly did, as no other acts during the weekend offered the unique conglomeration of sound that Röyksopp provided.

This LCD Soundsystem legend inspired many artists performing at the festival — I’m fairly sure I heard every song from 2010’s This is Happening over the course of the weekend — and served as an obvious spot for Chicago hipsters to gather and dance in unison. It took James Murphy a few minutes to find his sweet spot, but once he did, he brought the crowd with him. He gained and kept the audience’s interests by keeping everyone guessing. With a drop of disco and a smattering of funk, he jumped and flawlessly bounced through musical genres. For some, this was the first time they had seen him since he disbanded LCD Soundsystem, and it was admittedly jarring to see him behind the boards, but Murphy put any fears to rest by moving everyone’s feet. Whether he was mixing beats, pouring wine, or pulling espresso shots, Murphy has proven time and again that his pet projects will always be worth investigating.

The scene opened on a stage that was empty with the exception of a glorious sapphire diadem, larger than anyone could fit on their head. In a cloud of smoke, Empire of the Sun appeared with equally impressive crowns fitted on their heads, a burning sun at their backs, and a flurry of dancers at their disposal. This entrance to the last show on Saturday dazzled the screaming fans and brought everyone to their feet, especially when hit single “Walking on a Dream” urged the crowd to sing along. The whole thing made me feel like I had taken a time machine back to 1985 … or perhaps the fabulous future of 2085. Bird people in glowing red suits, an interactive geometric 3D visualizer, and blue-suited robots in plastic bubbles shared real estate on stage, all making it very problematic and impossible to explain to anyone who wasn’t there. How’d I do?

No Regular Play, because they were put in The Tent with the other house DJs, had a chance to stand out on Sunday with live vocals and an outstanding trumpet performance from member Greg Paulus. Their extended build up lost a few people at the beginning of the set, but those dedicated enough to stay were treated to the deepest of grooves while hiding out in the cool protection of the tent. Palm tree backgrounds, live vocals, and a constantly moving beach ball made the scene feel like a tiki party. Even though they lost a few people in the beginning, the duo soon had people flocking back in what could have been an act in the Pied Piper. Paulus’ trumpet demanded attention, built up the crowd, and soon had everyone swaying in unison. Their trumpet-based and salsa-inspired beat finished off the set and left everyone wanting more — this writer included.

Moon Boots came stampeding out of the gate with “I’m Every Woman” and a huge grin on his face. He must have been glad to play in his home city because he was clearly having a blast on stage. On stage with gritty scenes of the city flashing behind him, Moon Boots hypnotized himself and the audience into a dancing frenzy. With smiles all around, the audience was all too happy to give in and give back to the energetic groove-builder. As such, Moon Boots had the audience eating from his hands, making everyone give twinkle fingers before shouting, “I found you to love!” The energy in the tent during this daytime set defied the Sunday heat wave and brought the audience together in a way that I never wanted to see end. Alas, it did during his infectious single “C.Y.S.”, a banger that made the audience realize “our love was meant to be.” Moon Boots is a distinctive jewel in the Chicago house scene’s crown, and with sets like these, he makes it glimmer.