The three musicians are currently in the studio cutting tracks 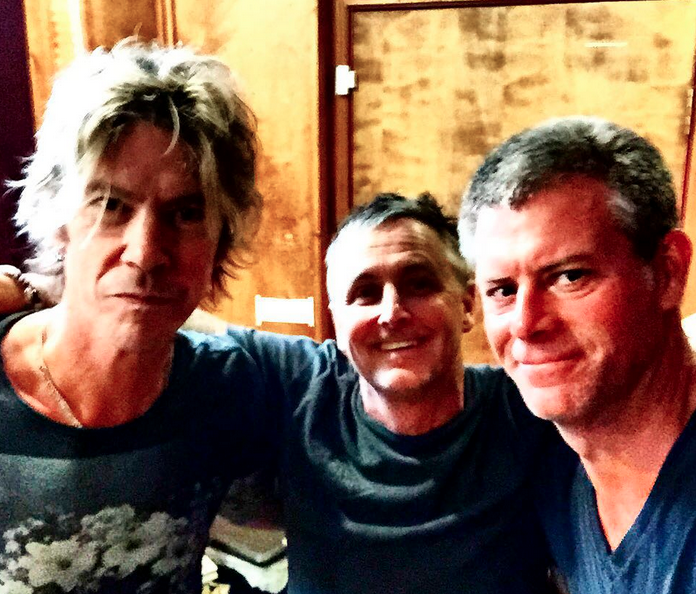 Truth: Mad Season will never really be Mad Season again. After all, both vocalist Layne Staley and bassist John Baker Saunders have long passed, which leaves guitarist Mike McCready and drummer Barrett Martin. Still, that hasn’t stopped the pair from keeping the banner alive, from a commemorative box set in 2013 to this past January’s star-studded reunion gig featuring Soundgarden frontman Chris Cornell at the mic. On Tuesday night, however, Martin announced on his Facebook that the group is currently in the studio working on new music alongside Guns N’ Roses bassist Duff McKagan (see above photo).

To be fair, new music for the one-time Seattle supergroup isn’t exactly a curveball. In 2013, Martin and McCready worked alongside McKagan, Peter Buck, and Mark Lanegan to flesh out material that dated back to the late ’90s and was originally written for Mad Season’s followup to Above. That material — specifically, three songs titled “Locomotive”, “Black Book of Fear”, and “Slip Away” — surfaced on the aforementioned box set. Thus, the decision to trek forward with the moniker shouldn’t come as a revelation to diehard fans, and Martin has always been quite transparent and forthcoming about his work with the band.

“Well, I am usually doing some kind of project with either Peter [Buck] or Mike [McCready], so we’re always kind of working together,” Martin told Alternative Nation last year. “For example, Mike and I worked on the Mad Season reissue for about a year last year, and we also recorded another album of Mad Season songs last year, in addition to the Tuatara tracks we did. And Peter has played with Walking Papers live, and there are always studio sessions that I am producing where I’ll need an acoustic guitar player and Peter is always my first call. So really, I’m always working with these guys in some form or another. And its always an honor to work with two of the best guitarists of my generation, I always remember that.”

Whether Buck, Lanegan, or even Cornell appear on the new songs or if the tracks amount to an album remains to be seen. In the meantime, it’s safe to say that Mad Season is alive and well, which some might call a blessing while others might consider sacrilege. Whatever the case, revisit the reconfigured band’s 2013 track, “Black Book of Fear”, below.