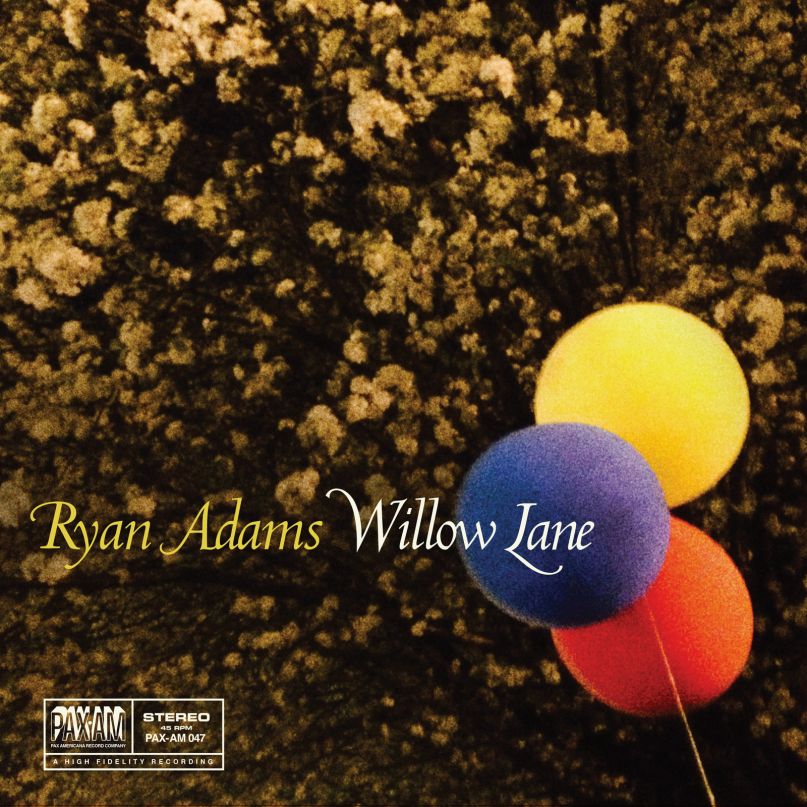 Broken rib be damned, the mighty Ryan Adams has not only continued touring, but he’s returned with the latest installment in his series of Pax-Am Records 7-inch singles.

Willow Lane follows the recently released I Do Not Feel Like Being Good and Burn In The Night and features three new songs: the title track, “Yes Or Run”, and “Red Hot Blues”. While the first two cuts are right within Adams’ wheelhouse of slow-burning alt country, the latter see the singer-songwriter taking on the blues with a guttural snarl reminiscent of Tom Waits.

Listen to the whole 7-inch below.

Along with the EP, Adams has enclosed a lengthy letter in which he talks about a mysterious cat and growing up in North Carolina, as well as lists some of his favorite summer jams. Read below:

“I was born and raised in Jacksonville, North Carolina. A city where the salt in the air eats away at the paint on the houses and anything made of metal rusts or discolors like sweat  lines in black t shirts long before its time.

“When I was in middle school my family moved from an extremely haunted house into a house over behind the High School, a part of town that was edged against the woods, where I first listened to Black Sabbath on my headphones, where I first heard the call of the wild and would find myself winding the woods late at night. Where I first saw Night Flight on tv and heard Sonic Youth, Voivod and Bad Brains and where I was able to see the documentary “Another State of Mind” about Social Distortion and Youth Brigade- which my life has been about since- That movie changed me forever. Living in that little house with my new step-dad his outdoor cat had a litter of kittens ( although I protested daily they would not allow animals in the house, strangely, even though they were like wild animals in their own way )… I feel so in love with the smallest kitten who couldn’t get to his food cause he was always trampled on and the only one who was almost all grey save for a single white foot. I loved him more than I had ever loved anyone or anything besides my grandparents and my Sacred Heart, Dio album. His name was Bully.

“To this day my entire childhood is wrapped around this mysterious cat. He was so trusting he would allow me to put him on my lap and ride with him on my bicycle. Every single day the bus pulled up to the end of the street to drop me off ( we lived in a street that turned into a cul-de-sac so the bus couldn’t go down it ) He must have heard the sound and knew I was home… literally every day he would walk to meet me and I was run to his side. Before I reached him as he walked towards me on the sidewalk he would flop over and purrrrr. I miss him everyday.

“I came home from summer school, in High School years later and he was laying exactly where he was when I was on my way to school that day and it was raining. He was laying on the front steps of my house. He had been poisoned. I would sneak him into my home and he would get kicked out. Seeing my cat like that destroyed me. I cried for three days. And then I packed a backpack full of some clothes and cassette tapes and I left home for good.

“In this track Willow Lane, it was late night and I think me and Marshall were just jamming at PaxAm… I had a lot on my mind. I had recently come back from being in North Carolina for the first time in years reacquainting myself with my father and sister after a long time. My then wife didnt know how bored the Jacksonville Police Dept was or how menacing. I knew it well having grown up running from the cops for skateboarding and other acts of madness. I often wondered what percentage of kids I grew up with eventually just went to jail who stayed there. There is a feeling of bleak desperation in the summer there. I used to feel it and taunt it growing up when the warm lights of my Grandmothers house offered me so much love, like a shelter from this raging storm of nothingness outside. It made it strangely fun.

“On that trip, it was just us, me and my other-half, standing in the yard of the now empty house that belonged to my GMa, the sense of loss was tremendous. I would soon lose her neighbor and my life-long band mate and brother, Allen.

“We ventured back to the house, the house I moved to from South Willow Lane, this bizarre home that stood in shadow while all other house were in sunlight. The entire neighborhood was starting to fall apart. Had it always been this way?

“I stood over where Bully had been buried and I could feel the sharp and awful pains of missing him so much in me. Holding him in my arms. So many days of my life were just him and me, laying in the yard reading comics- me talking to him. He was my best friend. He will always be the first and most special relationship in my life. He loved me everyday and for who I was. And our connection was intense and not at all like a boy and his cat. People who comment that he was more like a human or a dog, really and no matter where I went when I left the house he would run after me, even after the car- to the point where we would have to pick him up and bring him back home.

“This song and this single are for him. I love you, Bully. I do it all for you. I only believe in the other side so I might hold you close once more and lay with you in the sunlight and not waste a single moment again of our time.

“Yes or Run is a continuation of the Blue Light sound that I have been chasing, Mike V and Charlie helped me take this raw jam that was sitting on tape and shape it into something new and it makes me so proud and so happy that we continue those crazy nights at Pax…. and Red Hot Blues was a funny accidental comedic jam, many of which happen at PaxAm, one night during the writing sessions for the self -titled record- and that’s Tal on bass and Marsh on drums.  Doc Patt filled in the accordion at the end of Willow Lane- so if you cry it’s partially his fault too.

Keep on Keeping On

Dispatch from Wilmington DE, May 2015