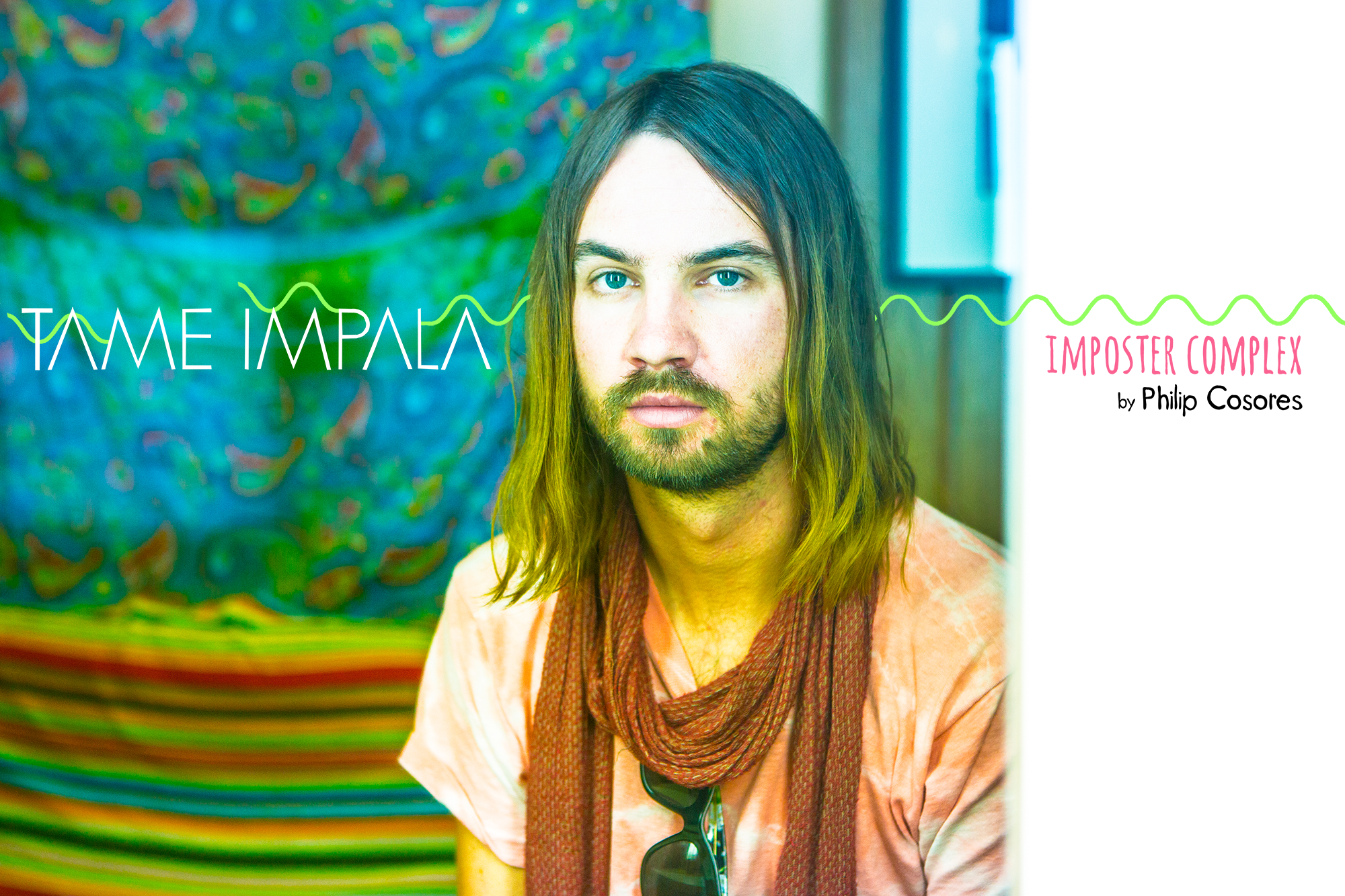 Kevin Parker, 29, walks into an interview trailer behind the main stage on the first weekend of Coachella. Charles Bradley’s soulful cries can be heard as the door swings open. Parker is relaxed, Tecate in hand, scarf loosely tied around his neck, flip-flops worn likely for safety, not comfort — he virtually always appears barefoot on stage.

In a few hours, his band Tame Impala will provide direct support for the biggest act to ever come out of his home country of Australia, AC/DC. Though his project’s psychedelic rock past doesn’t necessarily draw a direct influence from the classic rock icons, the honor isn’t lost on Parker.

“It’ll be an even more momentous occasion if we get to meet them,” he says with a smirk, “especially Angus Young. That would really seal the deal.”

Tame Impala, from all vantage points, have a ways to go to reach AC/DC’s heights, but in terms of current Australian acts, the band is at the top of the pack. After two well-received albums, their new Currents looks to push the outfit further than anyone could have predicted five years ago.

“I don’t even know how big AC/DC are in the rest of the world,” Parker says. “They’re like gods in Australia, royalty.”

When it comes to his own project’s growth, though, Parker reserves more disbelief. It’s as if Coachella and touring and television appearances and “Best of” lists are all a dream from which he tries not to be woken, or an elaborate hoax in which everyone from fans to critics are in on the ruse.

A week later over coffee at Swingers diner in Beverly Hills, a hop away from the band’s hotel rehearsal space, Parker asks glibly, “Is there such a thing as an ‘imposter complex?'”

It’s an idea that Parker brings up frequently in other ways, suggesting half-seriously that either he or his project are undeserving of the attention that they receive and that it all might go away at a moment’s notice.

While the idea is seemingly ridiculous, in a way, it beats the alternative. It keeps Parker grounded, appreciative of everything he has received from his music, and pushes him as an artist to make sure he deserves the acclaim.

Currents’ first single, “Let It Happen”, telegraphed a change for the project when it surfaced in March. The finger-snap production, the weaving in and out of sound tunnels, fidelity changes, percussion elements coming and going — it doesn’t sound like a band. “Let It Happen” is more akin to the work of an electronic producer, and despite the clear use of organic sounds and instrumentation, straddling the line between band and solo project is something that Parker is finally truly comfortable with, though it has been the project’s M.O. since its inception.

“So I’ve always made sure to play the drums from start to finish, to not loop them, to not do the same drum fill twice. And then I’ll play the bass the whole way through. And then I’ll make it sound organic, but that was totally just a flavor or a stylistic choice. But now, well, fuck it, you know?”

Parker explains what can plainly be heard: “I am essentially a producer, and I always have been, so I may as well embrace the other qualities of making music, like sampling claps and really exploring other territories and not just sticking to this one ethos. I just find it more interesting than bands … well, these days.”

Like many young people, Parker grew up listening to bands. In high school, he liked AC/DC, among others, but his infatuation with music began even before that as a young man growing up in Perth, Australia. After spending his early years being raised by his mother, he moved to stay with his father at the age of 11 and discovered a joy in creating music.

“Music was his main hobby,” Parker says of his father. “He played in bands all his life, played in cover bands. When I went to live with Dad, I started learning guitar because he played guitar. And then I discovered recording music … with just two tape decks. I realized that if you played drums into one tape and then play along to that, listen back to yourself playing drums and play guitar along to it, and then you hit record on the other tape deck, you’re recording two versions of yourself onto one tape. And you can just keep going.”

Parker laughs now when he thinks about it.

“I thought that I had invented something,” he says. “That was how much of a revelation the feeling was. And that basically grew into what I do now. Essentially, nothing has changed.”

Regardless of how the music was created, when Tame Impala surfaced on American shores with Innerspeaker, they were a band. Their first LA date in 2010 was a free show at the Echo opening for Rainbow Arabia’s residency. The place reached capacity, and Tame Impala played two more shows the next day at the Silverlake Lounge in attempts to please everyone curious about seeing them.

“I was confused and frustrated on that day,” Parker recalls. “I remember that I stormed off in a huff. Jay [Watson] and I were arguing. We argued for like the first three years of our career, straight. We just argued because we didn’t know what we were doing. Everything was new and unexplainable, and we couldn’t work out what was happening, so we didn’t know our roles; we hadn’t found our identities as people in this new world that we had been thrust into. I was really insecure about how good we were. Nothing to do with hype or expectation — it was just the expectations we had for ourselves. So that night it all kind of came to a head. It was the end of a stressful tour. We did the same thing in New York; we played two shows in a night in the same place, and it was packed.”

The run of Innerspeaker began back in Parker’s homeland — a story similar to so many in the late 2000s — when his music was discovered on Myspace by Glen Goetze from Modular. Of Parker’s early days recording in his bedroom, he notes that he had more ambition to be successful and famous when he was a teenager than when he was 20. “By the time I was 20, I realized it was kind of like a cliché wanting to be this famous rock star, this passé idea,” he says. “It was only then I saw it altruistically, which made the music better, that got us a record deal.”

Parker and his band were flown from Perth to Sydney to perform for Modular and were signed. Tame Impala’s debut EP was just demos that Parker had previously recorded himself, but for Innerspeaker, he had something bigger planned.

“I never thought that making an album was worth anyone else’s time until there was a record label saying, ‘You gotta release an album,’” Parker says. “So, basically, I just took everything I had in my bedroom, and I rented a house down south overlooking the ocean. I thought, ‘Well, fuck it.’ If I’m going to record it myself, I may as well spend the budget. I’m doing it in a nice house, not my bedroom in suburban Perth. Basically, I recorded the whole album with the same gear I had at home, but just did it in a slightly more professional manner. I made the album the same way that I do now, but knowing that people were going to hear it for the first time.”

Even back then, there was duality in Tame Impala. “There was me recording songs in my bedroom and the live band, Tame Impala, that would play around bars and music venues around Perth,” Parker says. “And we’d play a completely different set of songs. We’d play just these other songs I had written especially for the live thing, because the recorded ones were more intricate, a lot more carefully constructed. The live ones were just jams; we’d just jam psych rock blues for 40 minutes. It was only when we got signed that those worlds merged, when we actually had to play the songs I had recorded.”

But as Tame Impala began touring the world, the highs and lows of success struck Parker unexpectedly. He recalls the first time the band traveled for two weeks in Europe, including their first show in London, seeing a line down the street and losing his mind when he realized Noel Fielding of The Mighty Boosh was in attendance, along with recording engineer Liam Watson.

“A bunch of other people came to that show that I idolized,” Parker recalls. “And I remember just sitting outside on my balcony of the hotel room going, ‘What the actual fuck just happened? How am I ever going to re-live the amazingness, reach the amazingness of tonight?’ Then we went home. We got home, and we got back into our shared house, because we all live together, and I just remember feeling so emotional, getting back and seeing our shitty living room crap everywhere, musical shit everywhere. I remember standing outside and almost being brought to tears. It was just too much, coming home after all that and not having time to process what was going on. I got back and almost started crying; it was so overwhelming.”

Still, there was no doubt in Parker’s mind how he would be spending his time to come. “As soon as they told us we might be getting a record deal, I signed off on my entire life outside music,” Parker says. “I was like, ‘Well, that’s it. There’s my ticket.’”