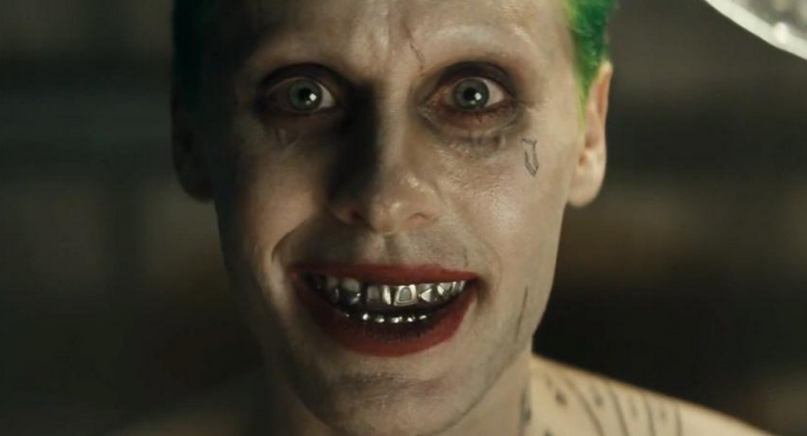 After airing to a rabid crowd at San Diego Comic-Con over the weekend, the first trailer for DC Comics and Warner Bros.’s Suicide Squad has come online.

Though a bit light on big action scenes or plot (David Ayer is still shooting the thing, after all), the footage does provide our first look at many of the movie’s major players, including Will Smith as Deadshot, Margot Robbie as Harley Quinn, and just at the end, a pretty frightening look at Jared Leto as the Joker. If you listen and watch closely, you’ll catch a reference to Superman and a shot of Batman (presumably Ben Affleck) riding atop Joker’s car. There’s also a panda with a machine gun. Check it out below:

Most of the rest of the Suicide Squad cast also appears in the trailer, including Adam Beach as Slipknot, Jai Courtney as Captain Boomerang, Cara Delevingne as Enchantress, Karen Fukuhara as Katana, Joel Kinnaman as Rick Flagg, Adewale Akinnuoye-Agbaje as Killer Croc, Jay Hernandez as El Diablo, and Viola Davis as Amanda Waller.

Personally, this short trailer quells some previous reservations about the movie being a self-inflicted gunshot wound to the whole DCCU — but only some.

Update: The trailer actually leaked over the weekend, and Warner Bros. originally took a hard stance against officially releasing it to the public. President of Worldwide Marketing and International Distribution for WB Sue Kroll told Deadline on Sunday, “We have no plans currently to release the Suicide Squad footage that leaked from Hall H on Saturday. It’s unfortunate and ultimately damaging that one individual broke a long-standing trust we have enjoyed with our fans at the convention by posting early material, which, at this point, was not intended for a wider audience.”

However, they studio has quite apparently turned course on the matter after failing to contain the leak. In a statement accompanying the above “first look” footage, Kroll said:

“Warner Bros. Pictures and our anti-piracy team have worked tirelessly over the last 48 hours to contain the Suicide Squad footage that was pirated from Hall H on Saturday. We have been unable to achieve that goal. Today we will release the same footage that has been illegally circulating on the web, in the form it was created and high quality with which it was intended to be enjoyed. We regret this decision as it was our intention to keep the footage as a unique experience for the Comic Con crowd, but we cannot continue to allow the film to be represented by the poor quality of the pirated footage stolen from our presentation.”