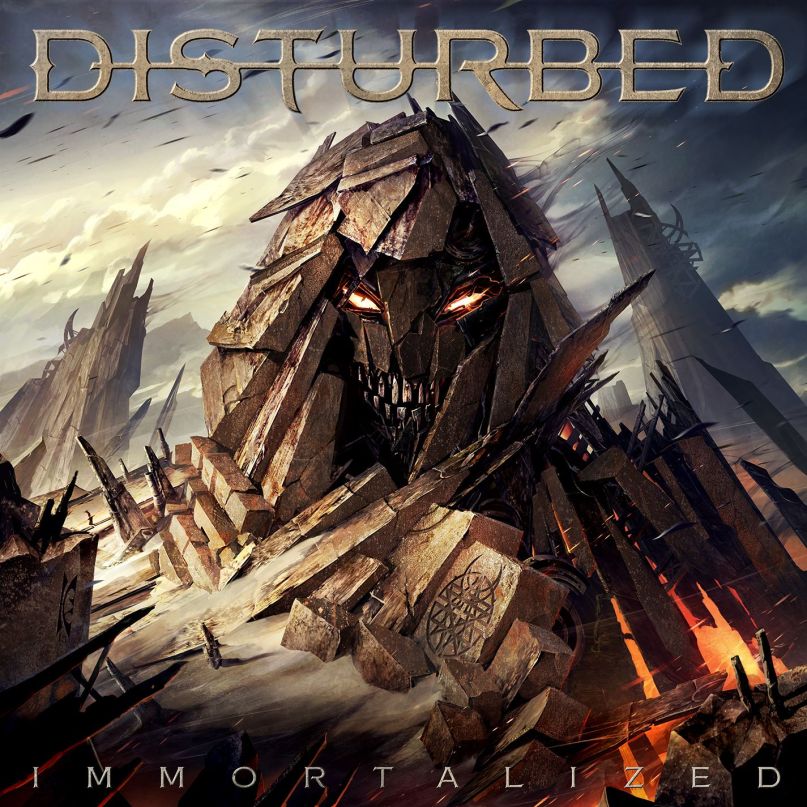 Disturbed is one of the most popular and profitable metal bands of all time. Following their nu metal anthem “Down with the Sickness”, they released four studio albums in 10 years, and all of them debuted at No. 1 on the Billboard 200. To put this into perspective, Metallica and Dave Matthews Band are the only other “rock” acts to have achieved such a feat. Though the band has never been able to match the ubiquitous mainstream success of “Down with the Sickness”, Disturbed have managed to eclipse and transcend the concept of One-Hit Wonder. After Pantera dissolved, Disturbed became the modern metal band and the pinnacle act in the world of glossy, overproduced, FM-ready metal. Only Lamb of God (and Deftones, if they can even be mentioned alongside these bands) have matched their longevity and consistent sales, while other popular bands of the era — Korn, Drowning Pool, Mudvayne, Alien Ant Farm — shriveled up or became legacy touring acts, relying on past successes to generate ticket sales.

Something about “Sickness” stuck. People became fans of not just the song, but the band that wrote the song. Frontman David Draiman’s melodic delivery, melodramatic as it was, brought a theatrical element lacking from those other bands. Even if Disturbed’s brand didn’t make them so different than their contemporaries, they had Draiman, and because of that, they were different. They were memorable. When responding to criticisms from the hardcore metal community that Disturbed wasn’t hard or heavy enough — or the dreaded phrase, “not metal enough” — Draiman was unfazed and stood by his band’s relatively pop-centric approach. “We probably have too much melody going on,” he said, “or we’re not quite as turbulent or caustic.”

It’s that very lack of causticity that gives Disturbed their consumer appeal, that allows them to perpetually sell records. But it also creates a cognitive dissonance between their commercial motivations and the metal image they project. There’s no reason why their sixth album, Immortalized, won’t hit No. 1 as well, especially since it’s being released after a strategic five-year hiatus, creating an artificial demand. Disturbed are accessible. It’s metal for the masses, which is a misnomer. In a time of truly extreme heavy music — black metal and doom hold sway over the underground markets and the ears of younger headbangers — Disturbed’s latest single, “The Vengeful One”, is straight-up bubblegum by comparison. It’s loud, and the guitars still follow that Pantera school of super-clean, active-pickup riffing, but those are the only things remotely “metal” about it. Draiman’s hyper-processed vocals and elementary lyrics about chaos and corruption (“You’ll die/ You’ll know why/ For you cannot be saved/ This world is too depraved”) reek of vapidity. Metal is indefinable, but if anything, it should be emotionally affecting and speak to a deeper spirituality. By this logic, Taylor Swift is more metal than Disturbed.

It comes down to honesty, or a lack thereof. After five years, Disturbed has released an album of material that could’ve been released on any of their past albums. Aesthetically, cuts like “Open Your Eyes” and “Immortalized” are painfully dated — staccato riffs have never sounded so limp — but to the ears of Disturbed fans, they’re familiar, even nostalgic. That’s where Immortalized fails: Innovation and change are sacrificed for the safety of the formula. It’s a spineless tactic, though not a bad business decision. Why not give fans what they want and keep the chart-topping streak alive?

In this way, Immortalized is a for-fans-only release. It openly and so earnestly feeds its target audience, as if to scoff at the very idea of Art vs. Product. Lamb of God found a balance between the two with their latest album, VII: Sturm und Drang, which shines as a recent example of how to move forward artistically and still appeal to one’s core fans and sell records. With Immortalized, Disturbed don’t even try.