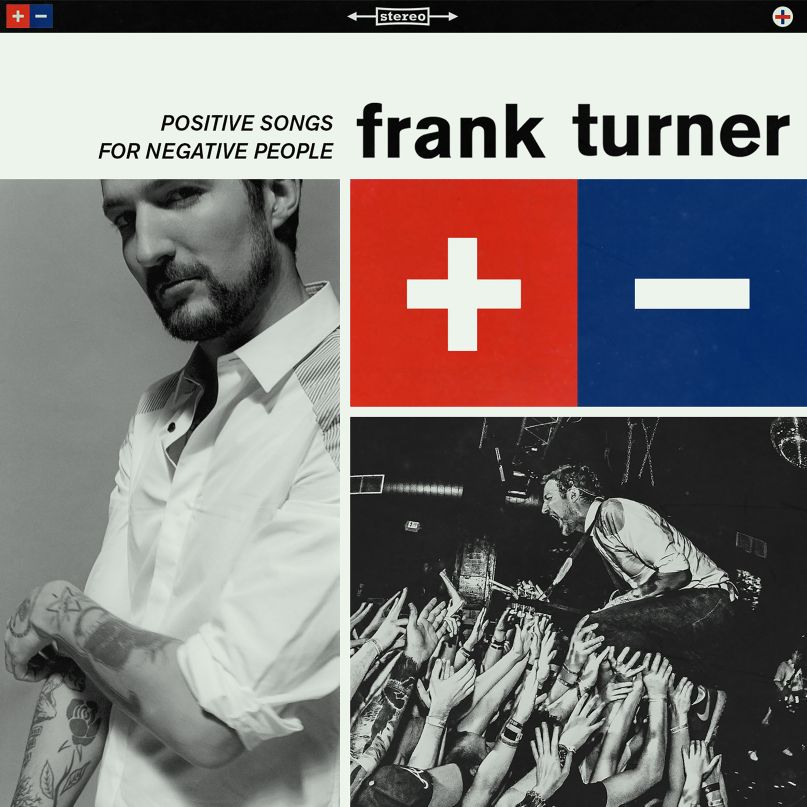 Positive Songs for Negative People is the name of Frank Turner’s sixth studio album, but it’s also a neat encapsulation of what the English singer-songwriter has been getting at since he left post-hardcore band Million Dead back in 2005. In the decade since, Turner has crisscrossed the globe a dozen or so times and transformed from another aging punk with an acoustic guitar to a galvanizing voice in the wilderness for his thousands of fans, many of them aging punks themselves. His shows have moved from corner pubs to concert halls, his singles have moved from the blogosphere to the British charts, and his lyrics have moved from the page to many a tattooed bicep.

The music has also graduated to a grander scale. Since 2009’s Poetry of the Deed, Turner has preferred to play and record with a full band backing him, making his songs feel less like conversations between friends and more like sermons bestowed upon the masses. “Hear ye! Hear ye! Friends and Romans, countrymen!” he interjects during crowd favorite “I Still Believe”, and it’s hard to detect a trace of irony in his voice. This is rock ‘n’ roll as a means of salvation, and with each album, Turner has become more comfortable with the notion that his music has the power to change the world — not just his own dreary corner of it.

And yet, some things haven’t changed. It’s easy to spot thematic consistencies across Turner’s albums, all of which seek to drown the anxieties of growing old in a cocktail of carpe diem battle cries. “We’re definitely going to hell,” he shouts at the end of his 2007 debut, “but we’ll have all the best stories to tell.” Eight years later, he’s still obsessed with living his best life possible, even if the road ahead looks a little shorter.

Speaking of roads, they’re a recurring motif on Positive Songs, starting with the Joycean jaunt through North London on “The Angel Islington”. Turner concludes his walk along the banks of the Thames by quietly resolving “to wash my feet and cleanse my sins.” This quasi-religious sentiment will sound familiar to Turner’s fans — as will the rest of Positive Songs, for that matter. Roads again appear on “Get Better”, “Out of Breath”, and “Demons”. However, Turner is not as interested in moving forward as he is in looking back and consolidating everything he’s done up to this point. It’s no mistake that this album’s title could apply to anything from his catalog.

Maybe that’s why Positive Songs feels like more of a rest stop than another landmark on Turner’s journey as a songwriter. It’s hard to shake the feeling that we’ve heard these songs before, and Turner even admits as much. “I’ve got no new tricks, yeah, I’m up on bricks,” he sings on “Get Better”, and it’s a strange sentiment to embed in a song about self-improvement. That being said, it’s also a song about drawing lines both literal and figurative, and that’s probably the best way to approach Positive Songs. This is both bookend and mission statement; wherever Turner goes from here will have to be different, and he seems to understand that. He’s just basking in the sun while he still can.

It remains to be seen whether Turner loyalists expect more than this, but I suspect they’ll be just fine with “digging a ditch” and maintaining the status quo. After all, the irony of the album’s title is that Turner’s fans are most certainly not negative people. You’ve got to have some seriously romantic blood coursing through your veins to stomach a song like “The Next Storm”, whose bridge singalong (“Rejoice, rebuild, the storm has passed”) is either profoundly affecting or profoundly cheesy, depending on how recently you’ve dealt with some sad shit. The same goes for the saccharine message of “Demons”, on which Turner throws a haymaker of sentimentality: “God damn, it’s good to be alive.”

The album’s best songs are those that more readily acknowledge life’s small tragedies. “Mittens” is a particular standout, probably because it limits its scope to the personal. The song’s stream-of-consciousness lyrics flow effortlessly from a thrift shop in New York to Turner’s home in Holloway, with one stray memory melting into another in the way that only memories do.

It’s a curious move to end an album of Positive Songs with two ruminations on death, but I suppose “Silent Key” and “Song for Josh” can just as easily be described as celebrations of life. The former pays tribute to Christa McAuliffe, one of the seven crew members killed in the Space Shuttle Challenger explosion. The latter is an acoustic eulogy for a man who headed the security team at DC’s 9:30 Club and took his own life in 2013. Turner recorded it live at the club, and it’s the first live track he’s included on a studio album since “The Ballad of Me and My Friends”. That’s the song on which he’s definitely going to hell. Years later, Turner sounds quieter, more contemplative, less willing to tempt the demons he knows are coming for him anyway. He’s still trying to prove that rock music can save your life, or at least lend it a bit of context, a bit of texture. Until he does, hell will have to wait.

Essential Tracks: “Get Better”, “Mittens”, and “Song for Josh”