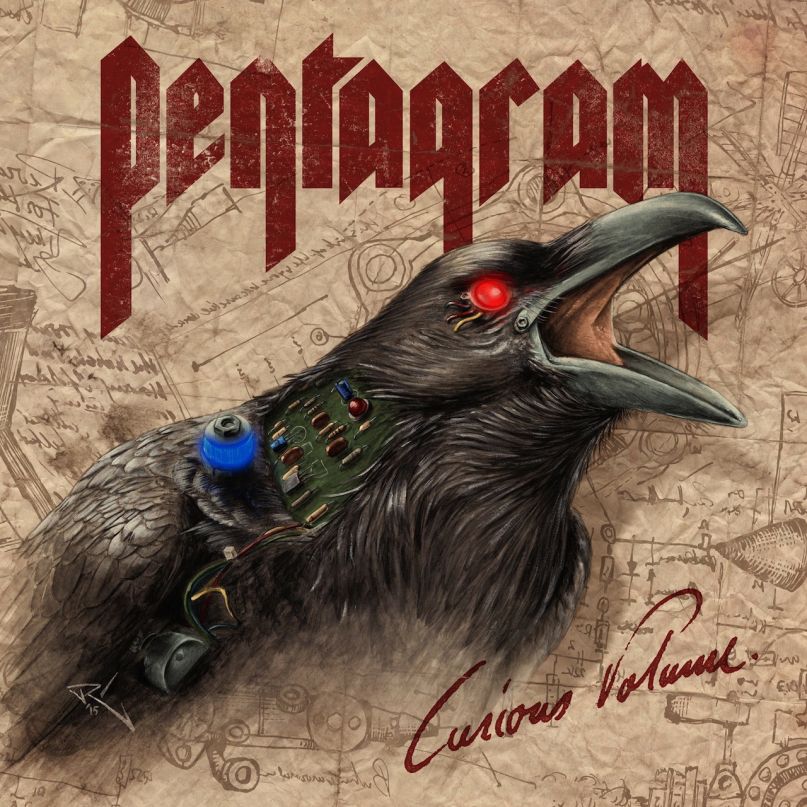 As seen in the excellent documentary Last Days Here, the redemption of Bobby Liebling and Pentagram is one of the great to-hell-and-back stories in rock history. One of the pioneers of American doom metal, Pentagram crafted some of the heaviest rock ‘n’ roll of the ’70s and ’80s, though little of it was heard outside collector and cult metal circles. These were lost decades for the band. For a variety of reasons — lineup fluidity, label distribution issues, and simply being in the wrong place at the wrong time — Pentagram never received the widespread acclaim and attention their music deserved. The records they did release became sought-after artifacts, documents of an outfit with all the prowess of Black Sabbath and Deep Purple and none of the luck and business savvy to capitalize on it.

Fortunately, one of those Pentagram LPs found its way to a man named Sean “Pellet” Pelletier who wasn’t content to let this band’s legacy fade away. Also the focus of the aforementioned documentary, Pellet sought out and befriended Liebling with the intent of revitalizing the group, its back catalog, and its leader. Liebling was in a bad way when Pellet arrived, addicted to drugs and living in the basement of his parents’ Virginia home. In the documentary, Pellet, who takes on a managerial role, and Liebling work together to kick addiction and reunite Pentagram for new recordings and concerts. Meanwhile, Pentagram was being rediscovered by the heavy metal underground via a timely Relapse Records compilation called First Daze Here that culled demos, bootlegs, and unreleased tracks from the band’s fertile ’70s era. Upon hearing cuts like “Forever My Queen” and “Starlady,” it’s jarring to think that these were left on a magnetic tape for decades, never pressed or given a proper release. The songs were too good to be ignored then and too good to be ignored now. Demand grew. By the end of the documentary, Liebling was back on stage with Pentagram (featuring the thick tones of guitarist Victor Griffin from their ’80s lineup) and releasing a new record, 2011’s Last Rites.

Now, Pentagram and Liebling are hitting on all cylinders, playing major festivals and being treated with the reverence of doom legends. For the first time, there appears to be consistency and structure in both Liebling’s life and within the band. Their latest record, Curious Volume, comes at the peak of this upswing. Pentagram is both playing with enthusiasm and writing new material, which can’t be said for most of their latter-era releases, which tended to lean on re-recorded old songs. Free from his substance abuse and with a committed lineup behind him, Liebling is finally able to concentrate wholly on what he does best: write and sing.

Curious Volume kicks off with a pair of safe tone-setting rockers, “Lay Down and Die” and “The Tempter’s Push”. But it’s what comes after that makes the record so enjoyable. On the doomtastic “Dead Bury Dead”, Griffin and Liebling feed off one another. Griffin slings a riff, and Liebling caresses a phrase tightly around it (“I won’t be condemned!”). This sort of interplay channels the chemistry they so outwardly display on stage when the former drops his instrument low and the latter leans against him, wagging his tongue and miming air guitar. Last Rites and the other post-2000 Pentagram albums lacked this fervor. There was something weighing down Liebling’s delivery. Whereas those records left an empty feeling, Curious Volume has a feel-good vibe. It’s a weirdly logical effect: The band is having fun, which makes the record intrinsically fun to listen to. Never has Liebling worn his love for Iggy Pop and the Stooges more openly than on the punky “Misunderstood”, and he pulls it off brilliantly and with youthful gusto (when, before, he may not have even attempted such a track). Heavy, deep cuts like “Curious Volume” and “Close the Casket” balance against the more playful moments. The record flows, and the brevity of its track lengths keep it engaging. Closing salvo “The Devil’s Playground” and the poignant “Because I Made It” tout the album’s strongest solos and end it on a climax.

The sleek, modern production of Curious Volume is its only drawback, as Pentagram is that rare band that actually benefits from murkier recordings — or maybe I’ve just been spoiled by the lo-fi brilliance of First Daze Here. But what is captured here is vivid and electric. Griffin and the rhythm section of bassist Greg Turley and drummer Pete Campbell keep it loose and professional; their takes are tight but not sterile. Liebling hasn’t sounded this comfortable in the vocal booth since 1994’s Be Forewarned. Oh, how far he has come. As a document of recovery and survival, Curious Volume is an inspiration. It riffs, it’s entertaining, but above all, it contains an existential joy that transcends recorded sound. That Liebling, after everything he went through, can rally his band and knock out an album like Curious Volume is a testament to the affirming powers of music and creation.