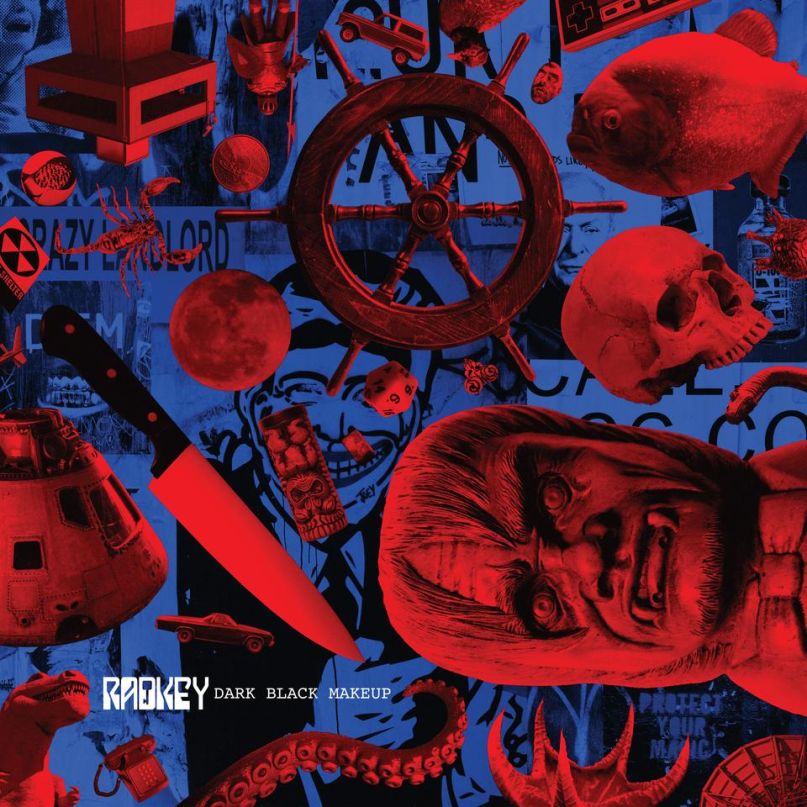 Brothers Dee, Isaiah, and Solomon Radke may be in a family band, but you won’t mistake this Missouri trio for the Hansons, the Jacksons, or the Osmonds. Radkey’s reference points come from a different subdivision of music history, and they wear them as Isaiah might wear a patch safety-pinned to his denim jacket: without apology or second thought. Their debut album, Dark Black Makeup, is a 13-track clinic in why the leanest, meanest punk rock always seems to come from kids who aren’t old enough to play half the venues in town.

If Radkey sounds more interested in bludgeoning their listeners than impressing their peers, it might have something to do with the band’s upbringing. They’re three home-schooled brothers, and their dad, Matt, manages most of their musical affairs. It’s tempting to dismiss this as merely an interesting footnote in their bio, but Radkey has clearly benefited from growing up in a relative vacuum. Rock may be about looking cool, but it’s also about being silly, and being silly is easier if you don’t have an open pipeline to the outside world. Just look at the Misfits, the silliest band of them all. Glenn Danzig got away with singing about werewolves and astro zombies because he was shameless enough to be himself amid a backdrop of suburban ennui.

It seems an apt comparison because, singing from behind a curtain of floppy dreadlocks, Dee emotes in a low register that strikingly recalls a young Danzig. Oh, and because the title track of Dark Black Makeup gets by on a combination of galloping power chords and vampire imagery. Is it a little silly? Sure, but it’s also one of the most fun straight-up rock tunes to emerge this year. The same goes for “Romance Dawn”, which opens as a fairly conventional fist-pumper before drummer Solomon’s mid-tempo beats pick up the pace and the song explodes into a mad dash between verse and chorus. It’s the kind of thing that would feel right at home on an SST 7-inch from 1981. One gets the impression that Damaged, I Against I, and other SST staples are on constant rotation in the Radke household.

That said, there’s a timeless quality to Dark Black Makeup that, again, probably has something to do with the band’s young age and built-in resistance to musical trends. It’s refreshing to hear a band that wears its influences on its sleeves without toeing the garage-punk party line, and it’s led to a surprisingly diverse collection of songs. Dee’s rich baritone shines on “Parade It”, not least because it’s propped up by a propulsive dance beat. Who cares that lyrics like “Your love has really got me down” look tepid on paper? This guy could make a renewal notice from the DMV sound sexy and dangerous. It doesn’t hurt that his guitar playing remains furiously on point throughout the album, whether he’s stealing the show with a solo (“Best Friends”) or helping his siblings hold down the rhythm with some percussive palm muting (“Feed My Brain”).

The band’s fourth member on Dark Black Makeup is producer Ross Orton. Orton helped oversee Arctic Monkeys’ AM, another album notable for its emphasis on full-bodied drumbeats and riffs so thick that “chewable” seems a fair descriptor. The Englishman deserves credit for spotting Radkey’s most compelling traits and creating a mix that emphasizes each, but there are times when immediacy is sacrificed for the sake of sheer heaviness. Tracks like “Best Friends” make the trio sound like an army of thousands, and it might have been wiser to keep things more raw. After all, the Misfits could barely play their instruments, and heirs like Alkaline Trio have learned the hard way that polish doesn’t always pay.

That’s the thing, though: Radkey is young, and it’s a bit ridiculous to hold them accountable for lessons they’ll learn in due time. Dark Black Makeup may not be a lights-out perfect debut. It may take most of its cues from punks now creeping toward retirement age. But these brothers have found some new juice to squeeze from rotting fruit, and in doing so, they’ve shown that the old guys have some lessons they could stand to learn, too.