The Good Life – Everybody’s Coming Down 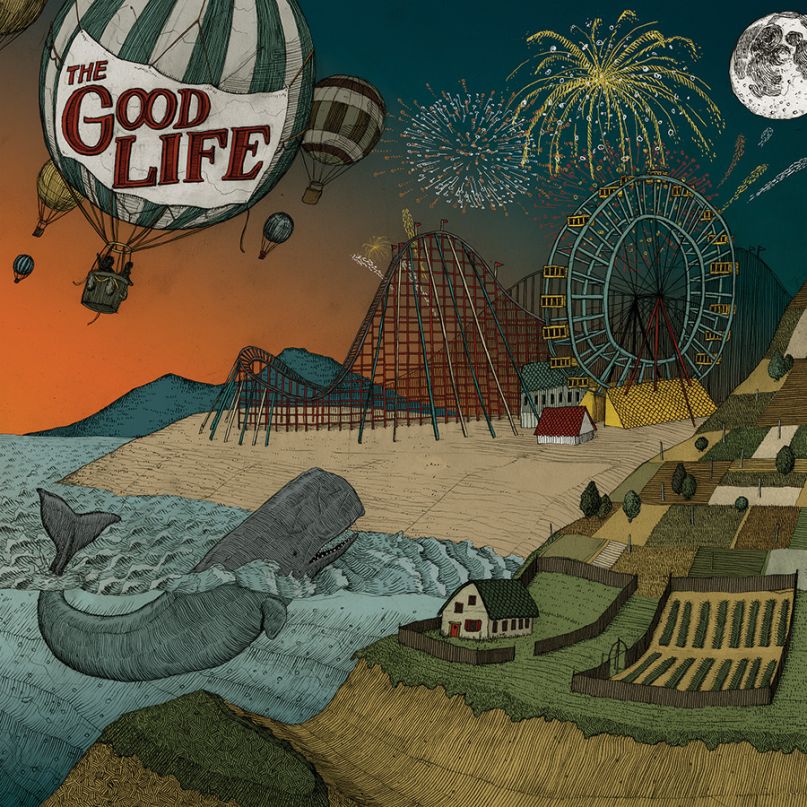 Tim Kasher is a transparent emotionalist. How he feels dictates how his music sounds and what it speaks to, often directly referencing the pleasures and turmoils of his personal life. In the earliest days of his band Cursive, Kasher was an unabashed screamer, letting loose the anxieties of his early 20s through squalls of post-hardcore guitar and bitter, literal lyrics of lovelorn solipsism — most notably on Domestica and The Ugly Organ, both of which have become canonized in indie rock lore.

Those albums were inspired by divorce; they sound like albums Kasher had to make. They contain a tangible catharsis, a coping. Like friend and scenemate Conor Oberst, Kasher is a jarringly personal songwriter. His feelings inform his creative inspirations. In a way, his discography is an autobiographical chronology. Cursive and Kasher would never match the intensity of those albums because, presumably, his life improved. He overcame divorce by making albums about it.

Which brings us to The Good Life, Kasher’s other band, one that has operated parallel to Cursive for the past 15 years. It’s an open-ended project, less electric and folkier. Throughout five records with The Good Life, Kasher has given himself an outlet to do whatever he wants musically, not bound to the pain (and memories) associated with Cursive. On his latest album, Everybody’s Coming Down, Kasher goes in any direction, from loud guitar rock to twee ditties, and The Good Life follows. Though some songs work better than others, the general freedom of the recordings gives the album the cohesion of a loose jam with friends — an inspiring, infectious effect.

After a brief intro track, big chords kick off “Everybody”, a track that bears resemblance to the Saddle Creekers of the ’90s, like Oberst’s Desaparecidos and Cursive in its crunchier moments. It also sets the album’s reflective tone. Rather than dwelling in his anxieties, Kasher looks back with a clarity and wisdom that can only come with age and experience. “Must we all wait in line?/ We’re all bystanders of our own lives, our own lows, and it’s killing us,” he sing-talks. “I used to want a future perfect/ Now all I want is past.”

Everybody’s Coming Down is crammed with such thought-provoking lines. Philosophic and literary, Kasher’s lyrics are alive. They never come off as strained or forced — they’re plainspoken grammatically, yet powerful. The aforementioned phrase becomes a tragic realization when typed out. As an English major and wordsmith, Kasher is at the top of his game here.

His lyrical prowess almost makes the music secondary, because when he starts singing, it’s the words that hook. We listen and we absorb Kasher’s musings. Mellow rocker “The Troubadour’s Green Room” continues the thematic thread of “Everybody”, albeit from a personal standpoint, as Kasher takes stock on his life and career. “I was young and in love with the names on the marquee, dreaming of my face on an LP/ Now I’m old and I know that the troubadour’s green room only looks big from the floor of the venue/ I’m singing for vanity, I’m singing for the world to want me, I’m singing ’cause I’m lonely.” “Forever Coming Down” and “How Small We Are” fight similar existential battles. Perhaps it’s defeatist, perhaps it’s self-aware. Kasher sings so coolly and calmly. Is he masking his pain? Is he resigned to it? To even trigger these questions is a testament to his lyrical dexterity.

Everybody’s Coming Down doesn’t try to change the face of rock music; it’s a safe-sounding, classy album, recorded in collaboration with Ben Brodin and expertly mixed by legend-in-the-making John Congleton (St. Vincent, Baroness, Angel Olsen), who keeps Kasher’s vocals sharp in the mix. It feels like a sequel to Cursive and Kasher’s career up until now: the diary of an oft-tormented songwriter who’s finally reached a point of realization. In a word, it’s a human album. Kasher doesn’t pretend to make sense of all the things he sings about. But in the act of trying not to ignore life’s absurd anomalies, to make as much sense as any one person can, he finds solace.

Essential Tracks: “Everybody”, “How Small We Are”