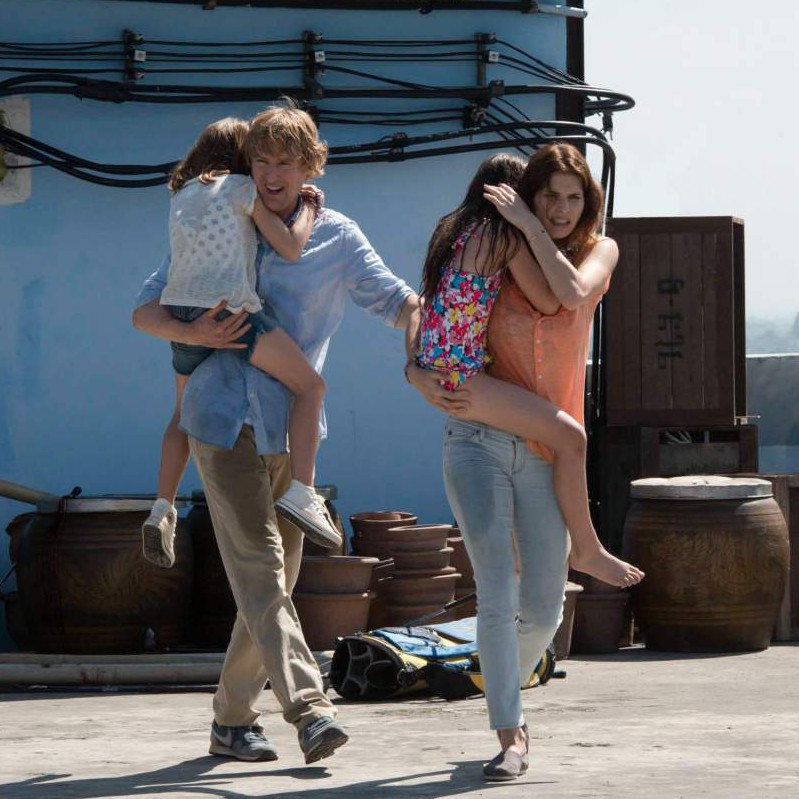 Owen Wilson, Mr. “Wow” himself, in a deadly serious geopolitical pulp film whipping his daughters across rooftops? What a terrible big moment to promote, too. No Escape’s ads have either been too intense (shaky camera work and loud screaming), or too vague (shifting release dates and even titles). Yet in the actual, final, now-released movie, Owen Wilson’s father character being forced to fend off vicious coup rebels in the hope of saving his family … let’s just say that the daughter toss, that fluid, stylized, quite literally over-the-top image, is among the least of his character’s worries.

Ransackings, machetes, machine guns, public executions, explosions, and an overwhelming sense of bad timing and even worse luck pervade No Escape, yet somehow the film works for what it is: a late-summer potboiler. Sitting down with this film and experiencing it in full is a chilling, challenging rush. In John Erick Dowdle and Drew Dowdle’s No Escape, that scene where Wilson throws his daughter elicits stomach-dropping gasps.

Jack Dwyer (Wilson) is an Austin engineer relocating his family to Southeast Asia in a desperate bid to get their lives back on track. With his wife Annie (Lake Bell) and two daughters Beeze and Lucy (Claire Geare and Sterling Jerins, uncredited), Dwyer is desperate for work. Why else would he go to the “fourth world,” as he casually calls it? He’s supposed to be working on a clean water project for a conglomerate, but the second the Dwyers arrive, everything erupts. It makes sense that a Western family wouldn’t have the faintest inkling that riots are about to break out in a country they barely know. As Dwyer walks to get a newspaper, he’s literally trapped in the middle of a battle between the police and the revolters. The film plainly declares that tourists are going to be shot and killed. He sees the stakes: Get the Dwyers out of there in any way possible.

With its vicious efficiency and harrowing circumstances, No Escape is a scare film about the nuclear family in peril, and how fight-or-flight kicks in when someone is pressed hard enough. No Escape asks a primally comprehensible question: What would you do to protect your family? While other middle-aged men might take on black-coated criminals with nothing more than a gun, Wilson and Bell answer more practically and desperately. They hide, run, and turn to violence when pressed. No Escape offers justifications. Wilson, the cinema’s most beloved beach bum, exudes genuine terror. Perhaps he’s perpetuating the father-as-hero mythos of a great many B-movie thrillers, but there’s something ingeniously left-field and upsetting about the casting of the cool-as-a-cucumber actor who comes across here as deeply fearful.

For all of its unending trauma, repetitive plot beats, and grindhouse-grade proclivities, No Escape manages to come out the other end as a breathless thrill machine. The film’s a lean, sweaty surprise, and makes daring choices throughout. From the unnerving jump cuts, to the crisp use of slow motion, to its willingness to push narrative comfort zone limits, No Escape feels both reckless and calculated.

To that point, the biggest struggle with No Escape is whether to accept or reject its premise and texture. Reject it as shock cinema, and you’re missing out on a brutally compelling paperback thriller, something rivetingly adult. Accept it, and you tacitly accept the film’s barbaric depictions of Southeast Asians for the sake of a frightening scenario.

However, No Escape is less interested in making a statement about the world than in making a plan for one family’s immediate survival. Drop the location and the political ideology for a second, and imagine why Owen Wilson might have to throw his daughter across a rooftop. No Escape gets you to really worry about that.