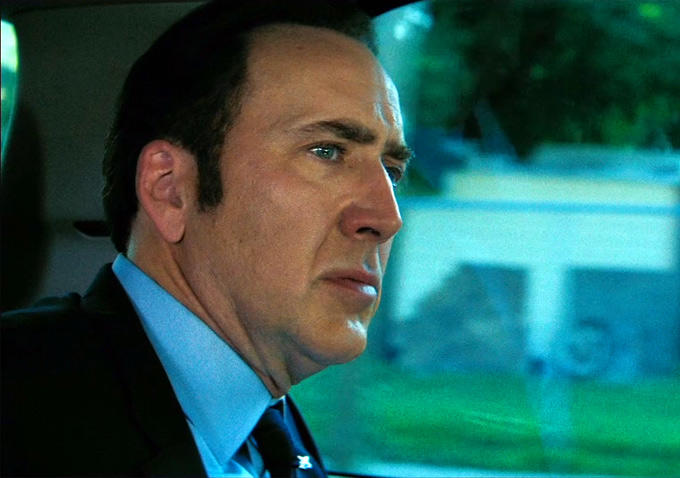 In light of this week’s Republican debates, we’re pretty much used to the old chestnut that politics is corrupt and the system turns even the most idealistic politicians into money-grubbing, ethically compromised shills. The latest film to explore this idea is Nicolas Cage’s mid-budget mortgage payment The Runner, released this week on VOD and very limited release by Alchemy (the folks behind the Milla Jovovich-Pierce Brosnan stinker Survivor and Welcome to Me earlier this year). Equal parts Big Oil message movie and melodramatic character study, The Runner gets so close to depth that it’s weirdly frustrating to see it fail.

Set against the backdrop of a post-BP spill Louisiana in 2010, The Runner follows idealistic Congressman Colin Pryce (Cage) as his attempts to serve the beleaguered people of his district are complicated by his own pitfalls — including a literal affair with the fisherman’s wife — and the frustrating compromises that come with a career in politics. In that respect, The Runner is actually quite admirable in its ambitions. Not many have tackled a big-issue movie on this specific backdrop yet, and the political compromises illustrated in Pryce’s rags-to-riches-to-rags story are frighteningly contemporary in their pervasiveness. After the sex scandal, Pryce’s honorable work trying to restore the local economy is tarnished by his reputation, leading him to increasingly desperate measures to gain any measure of personal or political ground. For its basic exploration of the frustrations of mid-level politics, The Runner can be lauded.

First-time writer/director Austin Stark, previously a producer on other indie dramas like Detachment and My Son, My Son, What Have Ye Done, tries his hardest to infuse the film with a sense of handheld immediacy, but the visual style gets stale fast. More egregious is the completely on-the-nose symbolism, offering a didacticism that clashes with the surprising complexity of Cage’s central performance. (Get it? He’s an avid jogger and he’s running for office!) It’s not hard to see the film’s aesthetic as a low-rent, Bourbon Street House of Cards, right down to Cage’s spotty Loo-seeana accent and Connie Nielsen’s bottle-blonde political opportunist wife. I hope Stark gets to play a little more with the camera next time around. As it stands, it looks like he doesn’t quite know what to do with it yet.

Admittedly, Cage is solid in The Runner, obviously pining for a return to more sedate roles in films like this and last year’s Joe. He plays Pryce with his characteristic mumbly fatigue, thankfully skipping any over-the-top histrionics. Cage’s more dramatic instincts are appropriately channeled into moments in which Pryce must himself put on a public face (speaking in front of crowds and Congress), a mask he takes off when he’s drinking alone in his dingy apartment. Despite the limitations of the script (and having to sell lines like “Even though it’s British Petroleum’s spill … it is America’s ocean!”), Stark puts closeups of Cage’s Boston Terrier jowls and baleful eyes to good use.

It’s a shame Pryce is saddled with thinly drawn supporting characters that not even hard-working players like Peter Fonda, Sarah Paulson, Wendell Pierce, and Mad Men’s Bryan Batt can turn into real people. Stark’s script plays up the complexity of Cage’s dramatic arc, but the rest of the film is disappointingly simple. Nielsen and Batt are power-grabbing opportunists who patently use Cage’s vulnerabilities against him, while Paulson is the understanding-but-cowardly love interest who just won’t give up her life for Cage. Everyone else — beleaguered local fishermen struggling after the oil spill, Peter Fonda’s alcoholic father who represents Cage’s self-destructive instincts, etc. — acts as mere ciphers for the political issues at hand, making parts of The Runner an eye-rolling exercise in political cynicism.

Stark’s didactic script and freshman direction make The Runner feel like Lord of War filtered through an Upworthy video or Michael Clayton c/o BuzzFeed. It’s sloppy and muddled, its quest to explore the compromises that come with political life mired in soap-opera contrivances and an overly cheap look that undercuts its seriousness. The Runner grasps at profundity, with a downbeat ending that pulls fewer punches than I expected, but ends up offering nothing particularly interesting as a political thriller or a character study. See it if you pine for the days of serious Cage. Otherwise, just run on past this one.