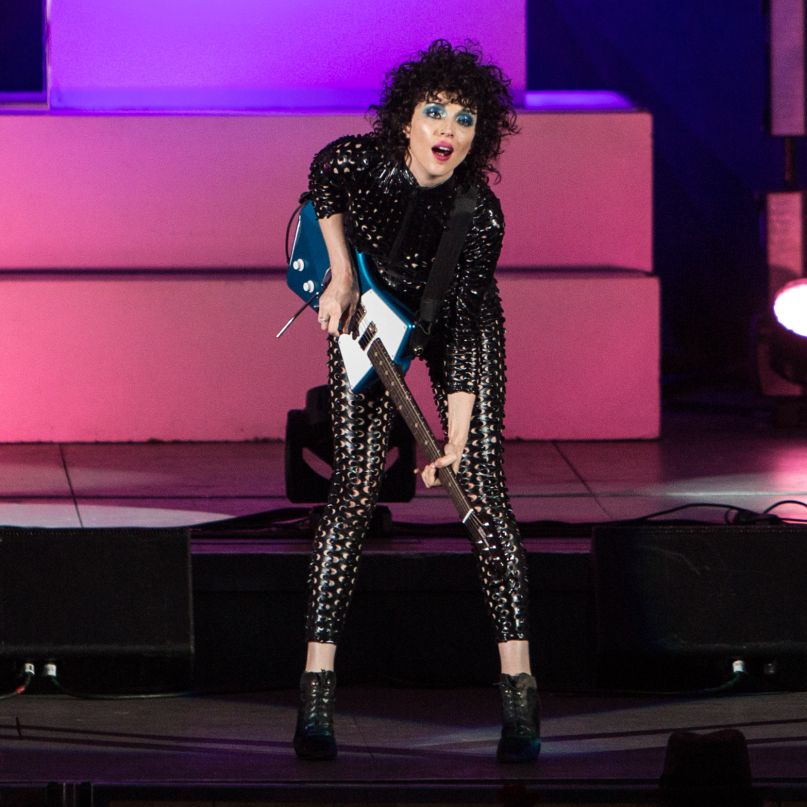 Last night, while Downtown Los Angeles became a hotbed of newsworthy activities that spun into a mourning for pop music, music television, and culture as a whole, the Hollywood hills provided something quite different. Sure, the VMAs attracted more celebrities and certainly more attention outside of Southern California, but the Hollywood Bowl still managed to get some big names (Beck, Justin Timberlake) out of the house to witness a triumphant, sold-out co-headlining bill from R&B legend Erykah Badu and one of music’s preeminent performers in St. Vincent. On a night that most of America turned their attention to celebrity beef and Kanye for president, the Bowl served as a reminder that there are choices for where we find our entertainment, on where we focus, and that art and music aren’t limited to what we see on television award shows.

Setting the tone for the evening was a brief, four-song set from Los Angeles rising star Moses Sumney, who like most in his position, displayed disbelief and honor at performing at the iconic venue. Sticking to his guns with his esoteric blend of guitar looping and loosely defined vocal melodies, Sumney made the most of his brief appearance by bringing with him an army of backing musicians for his last song, “Lonely World”. Before this number, Sumney had been charming enough to get the entire Bowl to shush each other on command, but “Lonely World”, with its concluding team-percussion, revealed Sumney to be a brave and adept performer on the large stage, accomplishing in 20 minutes what many others have trouble doing in an hour.

Of course, it is one thing to hit the peak that Sumney did, but what St. Vincent does on stage these days is on a whole different level. Though she has been touring her major label debut for more than a year, the remarkable thing about Annie Clark’s live presentation is that she continues to hone, change, and perfect it. Some aspects of her live show remain the same whether she is at a festival, in a small room, or at the Bowl, like the choreographed circle walking of “Bring Me Your Loves” or the tip-toeing back and forth with her onstage counterpart, Toko Yasuda, during “Birth in Reverse”. But on this night, Clark added in backing dancers to perform on her staircase above her, managed to incorporate new visual stunners like a mock tumble down the stairs, and at the set’s crescendo, practically came unhinged just to put herself back together again.

This was during “Your Lips Are Red”, from her 2007 debut LP. After the song’s tension had built to the same crisp climax that it does on record, Clark stormed into the audience, grabbing wine off one table to take a swig, throwing her guitar at a fan and forcing him to play it, and finally fleeing back to the stage where she was lifted to a hospital bed by her dancers and slowly spun around while she gave a final guitar solo. The spectacle was highly technical, never sacrificing the sonics of the song, but maybe most impressive was the overall intent of the moment. St. Vincent was playing to the whole room, with everything from her robotic stage movements to her facial expressions designed to work from the front row to the cheap seats. Slaying a sold-out Hollywood Bowl was just another small hurdle for her to conquer with a spectacle that is as visual as it is emotional. It would be hard to say that the dance routines and over-the-top presentations at the VMAs came close to accomplishing something similar.

The impossibility of topping this moment was acknowledged late in Badu’s set, with the singer commending both St. Vincent’s manic performance and her unparalleled fashion sense. But the cool thing about the mix of fans that Clark and Badu attracted was that there was no need for Badu to try to top St. Vincent. Her set was more like a change of pace, a switch of the channel for music fans with an omnivorous taste level, that easily have a palate for both the artistic adventures that St. Vincent provides and the nostalgic grooves of Badu.

Badu was happy to evoke the past frequently, offering to take fans back in time with hits “On & On” and a night-ending, triumphant “Tyrone”. But more exciting were a couple late set numbers. “Time’s a Wastin” was called out as a favorite of local rapper Tyler, the Creator, and it wasn’t hard to figure out why. With straightforward lyrics and a poignant message of urgency that would appeal to the young rapper, Badu sang, “Time’s a wastin/ Don’t you take your time young man/ Keep on driftin’ and/ Ain’t no tellin’ where you’ll land.” And with her penultimate number, she accomplished something that Clark never could: she got the majority of the Bowl up and dancing for “I Want You”. It was the perfect counterpoint to a set that kept viewers’ eyes focused — a chance to let loose and ditch any sense of cool. It was a moment in a show full of many that spoke to contemporary music’s vitality and something to keep in mind for those finding that night’s VMA drivel hard to escape.

Erykah Badu Setlist:
20 Feet Tall
Out My Mind, Just in Time
On & On
Appletree
Me
Love of My Life (An Ode to Hip Hop)
Cleva
Time’s a Wastin
I Want You
Tyrone