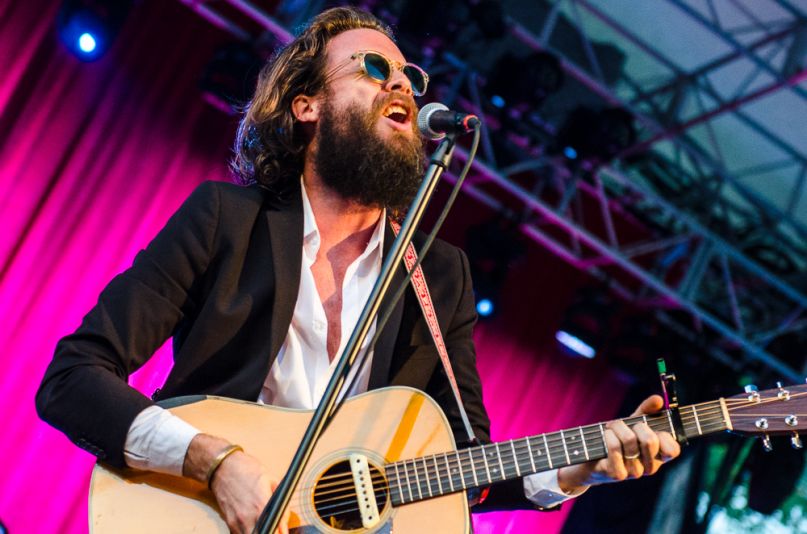 After a summer bouncing around from major festival to major festival, I’m usually begging for a tiny club venue. Not that I’m one of those anti-large-crowd people who thinks a Bonnaroo field is way too large to enjoy your favorite act. (Find me on the Farm next year, and I’ll prove it to you.) It’s just that after pushing through so many oversized outdoor audiences, I wind up missing the intimacy and enclosed environment of a solid indoor spot. But then again, there’s always something like Central Park’s SummerStage, where you get all the perks of a beautiful, open-air location without the swarms of sweaty humans running around for hours trying to catch just a bit of all their beloved performers packed into one schedule. Suddenly, an outdoor concert doesn’t seem such a fuss after all.

Wednesday evening was as perfect as you could hope for in early August in NYC: low humidity, a reasonable 80-something degrees, no rain clouds in sight. All that is to say, I couldn’t have hoped for a better place to catch Angel Olsen and Father John Misty.

I’ve actually seen Olsen a few times this year in the great outdoors, but never with a full band (and, quite possibly, never sober), so this particular show was an added treat. Burn Your Fire for No Witness is such a powerful collection of smoldering tracks, and I felt like I’d yet to really hear the album live on stage completely. She’s fine solo — gorgeous, really — but I wanted to feel the heat that’s on that record coming from her in person. Thankfully, that’s exactly what the three-piece backing her provided.

Her backing guitarist got to shine on songs like “Lights Out” and “Forgiven/Forgotten”, the latter of which finally pumped with the garage-folk fury that’s always been there in my headphones. A lot of that was due to the drumming, which continued to steal the show even on slower tracks, but the guitarist is again due credit. It was a bit strange that Olsen ceded so many of the solos and lead parts over to her bandmate, as she really should be the star attraction. Perhaps it revealed a chink in her armor in that she may not be as strong an instrumentalist as we might hope. Even if that’s true (and I’m not saying it is), the full-band arrangements still went a ways to securing her standing as a strong songwriter.

It also allowed Olsen to appear — to me, at least — more connected to the songs than she’s previously seemed. When she’s alone thumbing her guitar and singing out, it’s haunting and beautiful, to be sure, but often lacks that vital spirit that makes her records so captivating. Having all those instruments chugging along with her brought that back to the scene, and it all sounded more alive as a result. On “Sweet Dreams”, for instance, you could really feel the song’s embers burning redder as the track progressed, a heat energy I hadn’t experienced during prior renditions.

If there’s one trade-off to hearing her with full support, it’s that her voice wasn’t quite as in the forefront. And if that prior paragraph is still the working thesis, that’s a shame, because her vocals could be her strongest musical asset. That’s not to say they don’t still sound spectacular with each break and yoddle; they just aren’t quite as demanding with all the other sounds going on. Like I said, it’s a trade-off, and for my money, I’d give up the vocal impressiveness for the vitality any day.

Though on most days, you can just go ahead and give me Father John Misty. It’s hard to imagine that this man started his career essentially locked behind a drum kit as Josh Tillman in a baroque folk band. (Hey, remember Fleet Foxes?) Tillman was put on this Earth to be a frontman, and you could tell that even if you were standing with your back to him the entire time. Early in the evening, a woman told me she was so excited to see FJM that she was going to be in tears when he took the stage. I laughed at what I thought was hyperbole, but after seeing the crowd’s reaction to him once he entered, I fully believe she was crying at some point during the show.

The audience, apparently filled with adoring fans and adoring fans only, reacted like FJM was a freakin’ Beatle. They cried out, they reached up, they cheered and cheered. They knew every word and refused to leave to go get ice cream from the nearby vendors because they couldn’t bear to miss a moment. And it’s not like the ice cream vendor was that far away. Even those not 100% invested at first were quickly enraptured by the performer on stage, as he himself noted when he quipped about the folks “back on the picnic blankets drinking white wine” spontaneously standing together during “Chateau Lobby #4 (In C for Two Virgins)”.

Tillman definitely earned the adoration. Even on slower jams like “Nancy from Now On”, he was swinging the hips, jiving the knees. In fact, his knees must be pretty damned sturdy to take the beating he puts them through every night, dropping down to the stage more times than you could count. The mic stand rarely stood in place for long, as he would swing it high or toss it aside to swing the cable about.

His mic tech/roadie must be the hardest-working man in his field. He had to constantly be on the lookout to fix the stand or guide the cable as Tillman jumped into the pit and climbed the barrier to meet the crowd. Even simply making sure the cord didn’t get caught on other stage equipment was a constant battle the way Tillman moved; I don’t think I’ve ever seen a crew member have to physically lift and rearrange a monitor just to get the cable free. You could often see him side-stage with his hands on his knees catching his breath — and yet Tillman never seemed to slow down.

His voice never wavered, either. For all the showmanship he put into the act (and good golly there was a lot of showmanship), it’s easy to overlook the actual vocal talent of the man. It finally hit me during “Holy Shit” when he started the song single-handedly on acoustic guitar before the band re-entered with a clamorous drum solo and the thing ripped apart. From one half of the rendition to the next, his delivery was impeccable, as effortless as talking and as sturdy as a solid backbone.

There’s also his pure songwriting ability, something he put on full display with the I Love You, Honeybear tracks. Hearing it live, I think that “Bored in the USA” was the song he was always meant to write. Without question, he can craft a pretty folk number, like encore opener “I Went to the Store One Day”, alongside the best of them. But perhaps nothing captures his sardonic nature, his innate capacity for witticisms, and his irreverent seriousness better than the nonchalant takedown of American culture that is “Bored in the USA”. Even the way he sat cross-legged on the amp or the side of the stage, groaning exaggeratedly as he bent down, seemed to encapsulate his persona.

And that persona made for a wonderful outdoor concert experience. Whether he was joking about corporate sponsors, stealing fans’ phones to film himself, calling the sound of chirping crickets “very real,” or just going balls out up on stage, he was connecting with the crowd during every second. Festival season usually means a lot of half-seen sets in venues like this; for once, it was a real pleasure to be sucked into a show for the entire thing and let the hour-and-forty-five-minutes fly by like it was nothing.