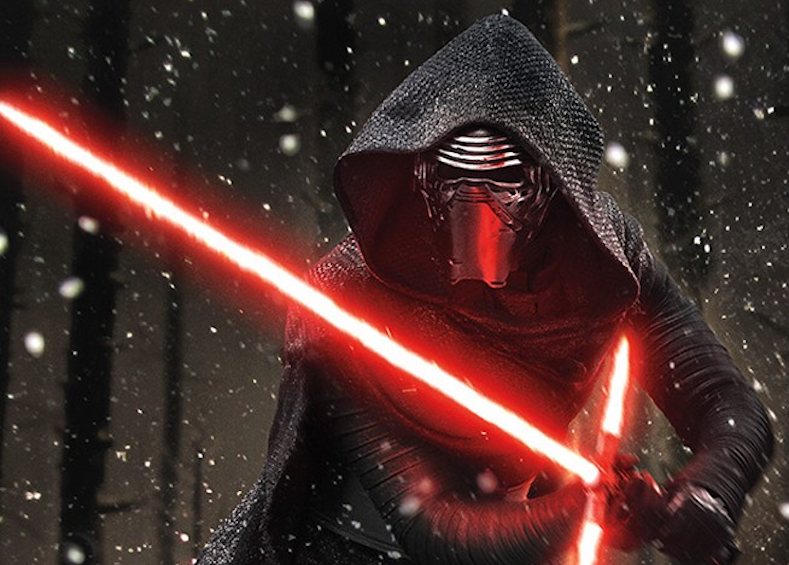 Star Wars: The Force Awakens is the cover story of this week’s Entertainment Weekly, and the article brings with it some new images and plot details.

In addition to closeup looks at Adam Driver’s Kylo Ren, Oscar Isaac’s Poe Dameron, and Gwendoline Christie’s chrome Captain Phasma, we’re given our first good glimpse of Domhnall Gleeson as General Hux (the first image below). We also get to see a clear shot at a long-expected change to C-3PO, namely a red left arm (because what’s a Star Wars movie if someone doesn’t lose an arm?). Other photos depict Daisy Ridley’s Rey and John Boyega’s Finn on the run from some Storm Troopers, Rey atop a downed AT-AT leg, Finn next to a burning TIE fighter, and Rey bagging up the BB-8 droid while a pretty incredible quadruped creature and rider look on.

There’s also a chilling shot of Kylo Ren walking through some burning wreckage with his Storm Troopers. In the interview portion of the story, director J.J. Abrams said of the character, “He is not your prototypical mustache-twirling bad guy. He is a little bit more complex than that…” Screenwriter Lawrence Kasdan added that the character is “full of emotion,” while Abrams revealed a potential spoiler for the character’s origins. Skip ahead if you’d prefer to stay in the dark.

Still reading? Abrams said that the name Ren is similar to the word “Darth,” in that it’s more of a title than a name. “He is a character who came to the name Kylo Ren when he joined a group called the Knights of Ren.” That’s all Abrams would say, but it’s an interesting tidbit nonetheless.

Abrams also mentioned that Ren’s mask is an intentional homage to Darth Vader by the character, and that he built that hilted lightsaber himself. “The lightsaber is something that he built himself, and is as dangerous and as fierce and as ragged as the character,” he said, adding, “I think that what makes Ren so unique is that he isn’t as fully formed as when we meet a character such as Darth Vader. And I think that there are two sides to the Force. Both sides, arguably, would see themselves as the hero of their story, and I think that applies here.”

Finally, Abrams confirmed that he will not be directing Episode IX, while praising Rian Johnson’s work on Episode VIII. Producer Kathleen Kennedy also was impressed with Johnson, adding, “We know where we’re going, but only in the broadest sense. When Rian came in and started writing his script, he started from scratch, other than knowing what we had done in Episode VII and projecting out where it was going. He then sat down and put pen to paper, and it’s 100 percent him.”

Below, check out all the Entertainment Weekly images, plus a recently released shot of The First Order (the Empire equivalent for The Force Awakens) assembled for battle.