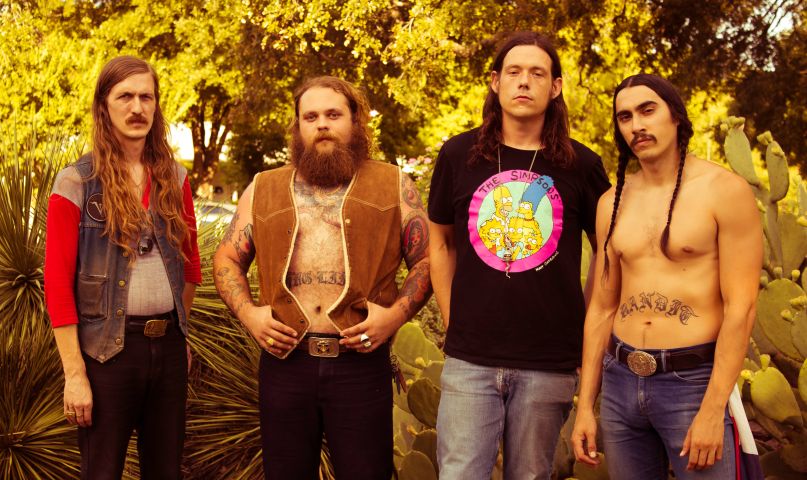 Austin heavy rockers Sweat Lodge will release their excellent debut LP, Talismana, this Friday via Ripple Music. In anticipation of its release, the band is streaming the album in full below.

Originally a three-piece, Sweat Lodge dropped a four-song EP in 2012 on American Icon Records and gigged the Austin scene for the next few years alongside fellow local acts like The Well and Ditch Witch. Eventually, the band expanded its sound by adding guitarists Javier Gardea and Dustin Anderson, increasing its profile in the process. After signing with Ripple Music earlier this year, the band was featured in a performance on Last Call with Carson Daly, exposing Sweat Lodge’s regional Texas stoner blues to a national audience. Led by frontman Cody Lee Johnston’s soulful vocals and a honed rhythm section, tracks such as “Bed of Ashes” and “Black Horizon” are some of the strongest stoner rock cuts of the year.

“We wanted all the songs on Talismana all to be from a different place technically, but musically spawned from the same attitude and idea,” Johnston says. “The Talismana skull dagger is our allegory for protection, hope, transcendence, and courage in the face of our crazy age. The tangible realization of all of our blood, sweat, and tears. I wanted the album reference that lyrically and emotionally.”

Pre-orders for Talismana are ongoing at Ripple Music.

Sweat Lodge have a series of West Coast and Canadian tour dates planned, most notably an appearance alongside Pentagram, YOB, Dead Moon, and Acid King at North West Hesh Fest August 27th – 29th at Dante’s in Portland. In a full-circle development, the festival is being promoted by Jonathan Galyon of American Icon Records, who dropped the band’s aformentioned debut EP.