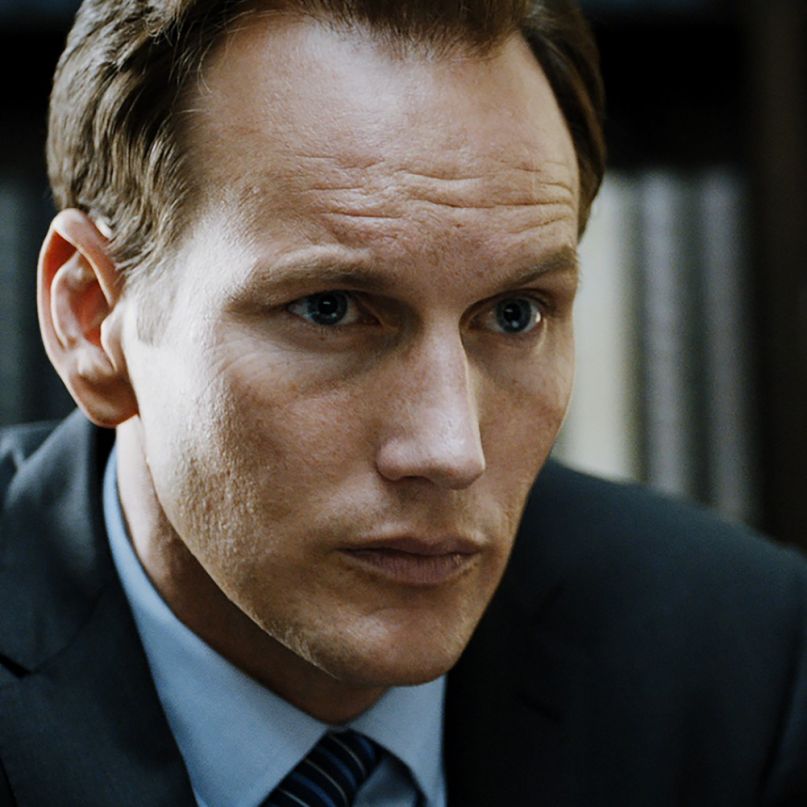 Note: This review was originally published back in February 2015 as part of our coverage for the Sundance Film Festival.

Michael Roffman (MR): There’s a reason Mora Stephens’ Zipper is the only collaborative review of our Sundance coverage. Save for The Bronze, the film was the most curiously horrendous entry out of the festival, a would-be DTV thriller thinly veiled as a smart, political drama. One sweaty and confused Patrick Wilson stars as Sam Ellis, “a hotshot federal prosecutor on the cusp of a bright political future,” as the 30-page press releases insists. But he has a problem — a “zipper problem,” so says Richard Dreyfuss — which finds him luridly addicted to paying and seeing dozens of high-priced escorts.

Dominick, I think you’d agree that this might be the tortured, unsung comedy of Sundance. There’s absolutely nothing promiscuous about this sexually charged thriller. Instead, it’s a total romp with hilarious, predictable tension and unruly visual metaphors that press the tongue way, way beyond the cheek. We caught this film on a Wednesday afternoon at a Press and Industry screening, and I lost count of the number of writers who picked up their belongings and shuffled out. It almost felt like a game of survival, seeing who could trudge through the next scene as the garbage piled higher in the theater.

Could we be looking at this decade’s answer to The Room?

Dominick Mayer (DM): If I disagree with you on that last point, it’s only because there’s such a sincerity of vision to Tommy Wiseau’s unintentional masterpiece that makes it all the more perfect in its utter failures. Whereas in the case of Zipper, the film fluctuates between tones so thoroughly that the whole thing comes off as insincere, an attempt at cynical commentary on the corruption of modern politics (and really, the modern American male), which carries itself with such onerous solemnity that you can’t help but crack up just a little bit at it. Where the trouble starts, I think, is that the film’s interesting core, about a man who starts philandering for little more reason than because of the sheer thrill of transgression, was already addressed with considerably more delicacy in Shame, a film that actually examines sex addiction as tragedy, instead of the decent man’s fetish.

In the vein of other crap movies like Addicted or especially Tyler Perry’s Temptation, which prominently indicted women for their wandering and amorous eyes, Zipper spends a considerable amount of its early minutes letting you enjoy the kinky, closed-door thrills that Sam enjoys, the perky young breasts and illicit prepaid phone calls and all of the many other trappings of a man backsliding into sin. (Frankly, I was stunned that the film had the meager restraint necessary to avoid descending into religious sermonizing. It seemed to be just around the corner.) The film wants you to appreciate Sam’s perspective before it rubs your nose in it all, because we all have very dirty minds and want exactly the same thing if we’re not steered straight. It’s so obvious in its storytelling that it comes off as condescending before long.

And then, there’s the aggressive pitch of the film’s Big Moments, which ask Wilson to descend into histrionics on par with Nicolas Cage’s infamous spasms in The Wicker Man. No comedy we watched at the festival featured anything as unintentionally hilarious as Wilson racing to an ATM, flop-sweating his way through a phone call to his preferred escort service, and finding to his dismay that the ATM won’t accept any of his cards! They’re all defaulting because of his incorrigible lust! He’s so excited! He’s so excited! He’s…so…scared!

MR: I’ll never hear the name Clio ever again. Or was it Klio? Oh well. What’s more depressing than watching Wilson struggle through another ill-fated production (see last year’s awfully unfunny Space Station 76) is reading Stephen’s three-paragraph mission statement in the press release. “It has been a six-year, non-stop, passionate, obsessive, and bumpy love affair directing ZIPPER,” she writes. “– the struggle making it every bit as nail-biting and harrowing as I hope the audience feels when they are watching the movie.” She goes on to explain how she was “interested in exploring Lucien Freud’s nude portraits” and how the film “is meant to provoke a debate afterwards — spilling into your dinner conversation and long into the night…” Yikes. I can only hope she wasn’t at our screening, as all her expectations turned into a comedic nightmare.

What happened, though? Was it the script? The acting? Was there ever a strong film in there? As you pointed out, Dom, Steve McQueen’s Shame previously tackled sex addiction with aplomb and grace. There’s nothing graceful about this production, and the key difference is that McQueen had a concrete vision with respect to nuance and tangible elements. Stephens isn’t interested in either aspect, and so her film not only makes loud statements with loud imagery but becomes more and more ludicrous as the predictably outrageous scenes start to pile up. They’re so outrageous I became convinced that Zipper was going to toss up its proverbial hands and fully commit to being a parody. Towards the end, I was literally begging Wilson to wink at us just before the credits rolled — that would have been respectful. Unfortunately, he never does.

As a result, it’s quite embarrassing watching all of the talent involved squirm their way through this mess, especially Lena Headey. It’s as if Stephens cast her solely for the film’s final twist, which finds Headey solving her husband’s problems by indulging in her own sexual misadventures. The swift change of character is a crass move, and the industry equivalent of a fanboy demanding a Cersei Lannister impersonation at Comic-Con. Why she agreed to do this film is beyond me, but then again, you could ask the same question to Wilson and Ray Winstone and, yes, Christopher McDonald. On a side note, isn’t it depressing that this film feels like a win-win for a veteran like Dreyfuss? Spielberg, it’s time you help your old friend out.

So, what are we missing?

DM: From time to time, you see one of these productions, though usually they don’t show up at festivals. You have a hot-button issue (corrupt, entitled politicians), coupled with a roster of well-known actors, that just falls flat. Offerings like Fast Food Nation, films that offer a lot of bluster and showmanship but precious little else. That’s the case with Zipper, to a T. The film’s hardly lacking in star power, even if as you pointed out, Mike, there’s ultimately little done with it. And it’s tapping into a too-relevant issue. (Hell, a love of escorts proved to be Elliot Spitzer’s undoing.) But in this particular film, there’s no room for any of the nuances you mentioned. This is high drama played not just to the back of the house but to the streets beyond. Wilson is less a morally flawed protagonist than a walking billboard with the words “WHITE MALE PRIVILEGE” outlined in neon. And while there’s definitely room to be critical of that concept, Zipper seems less interested in engaging with the entitlement that drives even seemingly good men to vice than it is in turning them into walking cartoons, there to watch their lives fall apart for their arrogance.

This sensibility extends to the rest of its characters. For a film interested in indicting exploitation, Zipper also takes a rather reductive approach to sex work, casting its for-hire lovers as either doe-eyed ingenues or broken junkies. (Because, you know, nobody could ever do such a shameful thing of their own volition or anything. Again, nuance.) The film wants to moralize but doesn’t ultimately say much more than “don’t make heroes of politicians.” In that way, Zipper ends up coming off even uglier, if anything, in its final moments, because it seems to resolve that everybody making our national decisions is corrupt, there’s nothing we can do, and the cycle will continue unabated. It’s not an entirely invalid thesis, but then why make such a fuss about establishing how good of a guy Sam was until he started to backslide? Virtually everything that happens in Zipper seems to be born more out of narrative convenience than any kind of real storytelling necessity. And what you have left is a montage of tasteful humping, loud arguments, and a grown man crying and crawling around in a dumpster. Plus, that one scene where an FBI agent walks into the movie to explain the movie’s themes to you, in case you weren’t paying attention right up until that point.