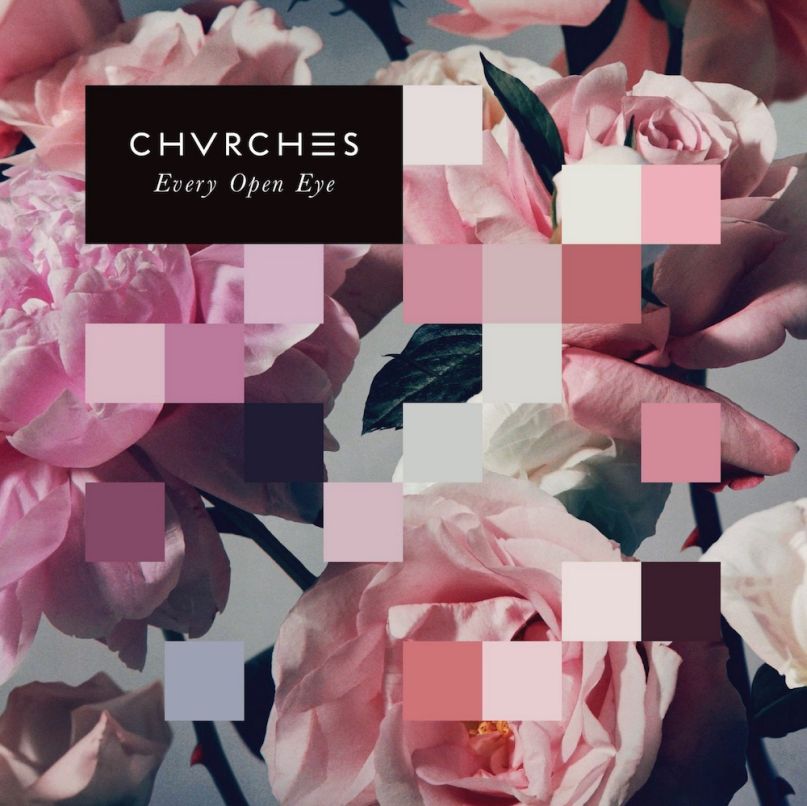 A year ago, CHVRCHES were just finishing up their victory lap tour behind The Bones of What You Believe, the 2013 album that rocketed the Glasgow trio out of relative obscurity and into headlining festival slots. The debut hit like a perfect storm; colorful, accessible pop tones swirled together with clever structural escalations and hooks that just would not stop raining down. CHVRCHES wrote pre-choruses that were good enough to be choruses, and when the chorus actually came, it was like the song had just unhinged a second pair of jaws.

That wave of Neon Gold-styled bands — a little too pop to be indie and a little too indie to be pop — crested in late 2013, when CHVRCHES debuted on Virgin in just the right atmosphere to make them, by some standard, stars. Bones went gold in the UK, and the blog-to-blitzkrieg crossover seemed complete. But a storm of sudden attention isn’t always beneficial to a band in its relative infancy, and some songwriters don’t write as well when they know people are going to be listening. The trio’s follow-up album, Every Open Eye, hits many of the same synth-addled notes as CHVRCHES’ debut, but lacks much of the urgency that made Bones so potent.

Rather than an unhinged jaw, Every Open Eye glints like a freshly whitened smile. The sweetly menacing jabs hidden on Bones, like Lauren Mayberry’s warning that “you had better run from me with everything you own” from “Gun”, are absent here. This is not an album that poses any danger; instead, the lyrics tend to scan like breakup song Mad Libs. “We bide our time/ Stay afloat/ Keeping the sun up off our bones,” Mayberry sings on “Keep You On My Side”, reaching again for bones as symbols but diluting the metaphor with sun and water until the image blurs.

(Read – CHVRCHES: All Eyes on You)

“Make Them Gold” pairs a bombastic major chord progression with lines that border on redundancy, like “We are falling but not alone/ We will take the best parts of ourselves and make them gold.” These songs keep CHVRCHES’ tempos and their spirits up, but the affirmations smear together. The melodies to which they’re set don’t lend much depth to the words, either; Mayberry’s voice is as polished and charistmatic as ever, but along with Iain Cook and Martin Doherty on synths, she keeps tracing square, safe bars, song after song. The band’s most buoyant patches tread the most leaden progressions, like on “Clearest Blue”, whose breakdown leads to a game of octave pong on a chirpy keyboard for a full two minutes until the song ends.

“Leave a Trace” comes through as the album’s most concrete chapter, and the one most likely to inspire obsessive replay like CHVRCHES’ first round of singles. Mayberry stretches to the top of her range at the chorus, as she sings, “I know I need to feel relief/ I know I need to feel release,” which, if not the band’s zippiest couplet, at least supplies an easy desire to wrap your head around. “I’ll admit that I got it wrong/ And there is gray between the lines,” she continues in the verse, mixing metaphors as if to illustrate the mistakes she’s just confessed.

Even at its most revealing and tender, Every Open Eye feels guarded. “Afterglow” winds things down as the album’s final track and only downtempo moment. CHVRCHES’ nonstop synths break away from tapping out beats to provide a little atmosphere, and Mayberry stretches out her syllables to a pleasant yawn. “I’ll find my own way back,” she sings, and I’m with her until she finishes the line with “back to the past tense.” Then: “We wait for the afterglow to cover the blind side/ And I should know.” The song has a cinematic prettiness to it — it’ll score a climax or a credit roll someday — but comes up shallow, like a half-finished demo with placeholder lyrics and a chorus still waiting to be written.

In simplifying their music, CHVRCHES lost some of the specificity that made their debut so intriguing. Every Open Eye goes down smooth, but it’s hard not to miss the moments of exhilaration that used to power the band. They used to sound like they were getting away with something devious and fun; now, it sounds like they’re just getting by.