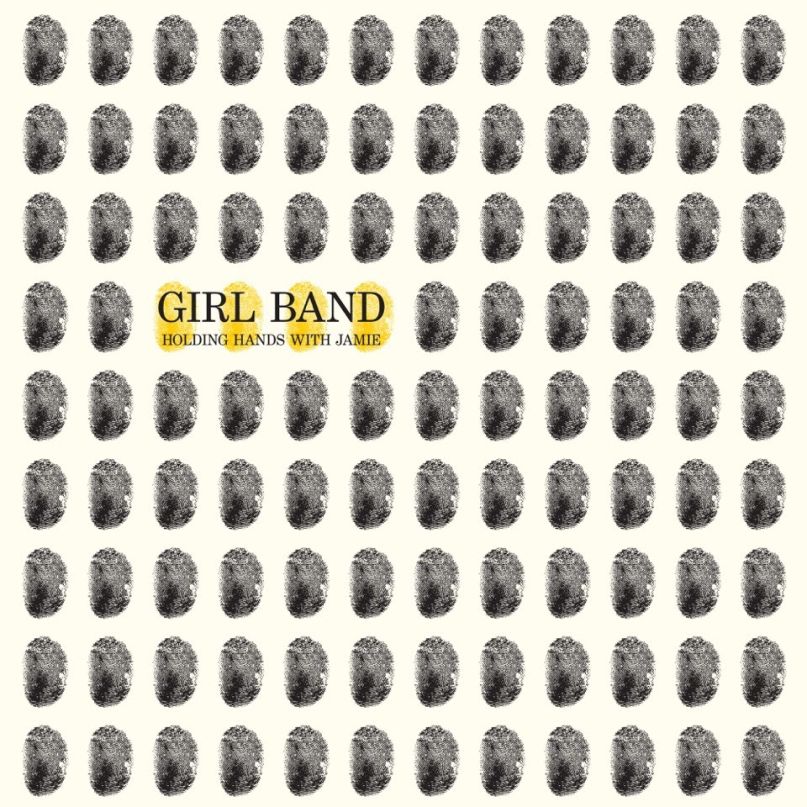 A lot of bands blend drastically disparate influences, but few sound like the blender, too. Dublin four-piece Girl Band is one such act, slicing up parts of everything from no wave to techno, using guitar and drums like power tools as much as instruments. But that implies that they’re consciously taking influence from bands like Big Black, Throbbing Gristle, James Chance and the Contortions, Talking Heads, and The Chemical Brothers, while in interviews, they’ve denied influences (either things they don’t know or don’t like) as often or more than noting them. There’s an autodidactic mania to the band’s debut, Holding Hands with Jamie, the sound of four semi-feral young men who figured out their own way to make enough noise to alternately cover up and communicate the fact that they’re frustrated, self-deprecating, laughing at society, and having panic attacks — if not worse.

In an interview with NME, frontman Dara Kiely explained how the album stemmed from “a messy break-up which led to a psychotic episode and a breakdown.” Though it’s not all rain clouds and sour faces; his bandmates apparently laughed through their explanation, relating manic behavior ranging from excessive happiness to Kiely’s conviction that he was God and could control the weather. He and his bandmates have firsthand knowledge that the mechanisms of one’s self, of the human brain, can work in unexpected ways, even at odds with their supposed natural state. They’ve also seen that those “malfunctions” can be humorous, entertaining, and maybe even fixed (whatever that might mean).

As such, the four musicians take on the mess, using alternative approaches to their instruments to turn them into something just recognizable enough to audiences not always ready to dive into someone else’s chaotic headspace. Guitarist Alan Duggan embraces the mess, working as a percussive element as much as a melodic one. Meanwhile, Daniel Fox and Adam Faulkner do the work that no wave’s best rhythm sections did years ago, grounding everything in a near-danceable insistence, but also able to switch gears and chase the chaos at a moment’s notice. Moreover, they’re willing to experiment; Faulkner apparently used hubcaps and antacid bottles to supplement his drum kit.

As a unit, the three lock into patterns and drone like a Krautrock band, as on “Pears for Lunch”. Or they build out an extended groove and push and pull at their repetition like a techno track, as on “Fucking Butter”, where Duggan layers his guitar like a sequencer. Or they drill through the muck and noise straight into your skull, like on closer “The Witch Dr.” Similarly, Kiely stands at the front of the band, either mumbling in a depressed, mush-mouthed monotone or having a manic, mile-a-minute rant, or yelping and gritting his teeth in a frenzy. Sometimes the pieces fit together in a manic episode (“The Witch Dr.” particularly burns), and elsewhere they’re depressed (“In Plastic” is an erstwhile ballad, opening with Faulkner clicking out a waltz, Duggan making his guitar mechanically wail and sigh).

Like Duggan’s guitar, Kiely’s vocals often serve a percussive purpose, adding another layer to the entrancing, rhythmic propulsion. He often sounds like he’s shouting toward the microphone rather than into it, making his lyrics difficult to understand, though the perceptible phrases that flash out typically support the shaky, depressed state Kiely wanted to replicate. “I look crap with my top off,” he repeats on “Pears for Lunch”, later adding how he would “spend my time watching Top Gear with my trousers down.” Later, “Fucking Butter” finds the ails and pains originating less explicitly from his own mind; the wild-eyed insistence with which he repeatedly howls the word Nutella is simultaneously disconcerting and hilarious. It helps, too, that the eight-minute track also includes a repeated mantra that ends with an insistence that “everything feels OK,” before Fox swings his bass into a strutting saunter.

Throughout the album, the repeated rhythms and lyrics work to both demonstrate the mania Kiely went through and soothe it, even temporarily, much like the way some individuals with obsessive-compulsive disorder can only move on from a thought or action once it’s been repeated a specific number of times. There’s logic to the illogic, the way Girl Band find a straight path through the uncharted swamp. The quartet do an impressive job of teetering on the edge of chaos the same way a lot of life does. The topping on a slice of toast and a broken relationship might not seem like equal triggers for roiling, idiosyncratic music like this, but Holding Hands with Jamie deftly maneuvers and manufactures its own sense and nonsense in equal measure.