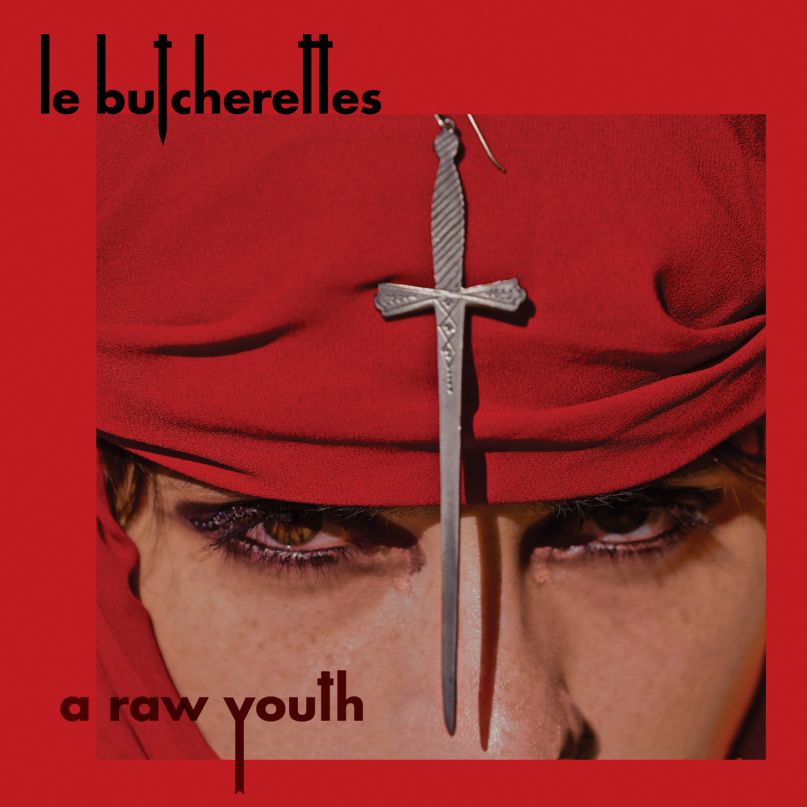 After years of circling the rock mainstream, buoyed by collaborations and co-signs from legends and maestros, Le Butcherettes are finally poised to kick the door down into popular consciousness. The Mexican garage punk band led by Teri Gender Bender goes for its most straightforward sound yet on A Raw Youth. If they stumble occasionally, that’s only because of the white-knuckled grip they keep on what makes them unique.

Judging from their first two albums, Sin Sin Sin and Cry Is for the Flies, Le Butcherettes prefer to kick things off with spiky, uncannily memorable keyboard lines, a feature that soon became a calling card. Not so on A Raw Youth. Opener “Shave the Pride” is an astonishing punk banger that brings the full force of the group to bear, and they continue to try traditional rock formulas on for size with “My Mallely” and “Reason to Die Young”. They even add a dash of glam swagger to “Stab My Back”, a song with a stomping rhythm that wouldn’t sound out of place on a Franz Ferdinand record.

What keeps Le Butcherettes’ oddly traditional rock songs from becoming ordinarily traditional rock songs is Gender Bender’s presence. As a vocalist, she is dramatic and versatile, switching between a nasal, witchy cadence and a straight-up belt in the chorus of “Shave the Pride”. As a lyricist, she is idiosyncratic: “Shave the Pride” originally referred to Gender Bender’s frustration with a lover who hid behind his beard. After rewrites, the song came to target society’s “beard,” which “symbolizes our unwillingness to view all perceptions of [a] story … hiding behind the mass media,” she told NPR.

Gender Bender’s singular view of the world politicizes the mundane, which can come off as either quirky or indulgent. Take “La Uva,” which means “grape,” a representation of “a fragile being that can be stepped on. But, the ink from its body stains and is seen by other people,” she told MTV. “La Uva” features Iggy Pop, with whom Le Butcherettes toured in 2011. Save Gender Bender’s enduring and fruitful collaboration with Omar Rodriguez-Lopez, this tie-in with the punk legend is the album’s most valuable. Pop’s gravelly tone provides the sinister undercurrent to Gender Bender’s voice you never thought it needed.

In the band’s initial statement on the album, Gender Bender highlighted “Sold Less Than Gold”, which is about “women who are sold into marriages or into sex slavery and how resilient their spirits are.” The song is a classic case of catchy melodies juxtaposed against dark lyrics, but the cheesy cheapness of the perky synth underscores the fact that the women Gender Bender inhabits in the lyrics are literally sold for pittances “at age 13.” Her voice is deliberately casual and artificially demure as she conveys the women’s resilience through a chilling lack of affect in the matter-of-fact lines “Because of you/ I am sold less than gold/ Less than gold.” Gender Bender ends the song hurriedly, and its lack of resolution only makes it more unsettling.

As on “Sold Less Than Gold”, Gender Bender shows on “The Hitch Hiker” that she is most effective as a songwriter when she inhabits characters. On this campy, freewheeling track (that should absolutely get its own video), Gender Bender plays out a call-and-response between a hitchhiker and the man who picks her up. The situation escalates into murder, but the song, buoyed by a prancing keyboard melody akin to older Le Butcherettes material, never stops sounding perversely fun. Unlike the systemic sex trafficking of “Sold Less Than Gold”, the violence here is more individualized and unexpected. “This ain’t the kind of war that you signed up for,” the chorus details. She notes that predation can quickly lead to a “trail of young bones,” but Gender Bender chooses not to moralize, remaining true to the thrills that can come with danger. At the same time, she sings from experience — her family members have been kidnapped before, her mother among them. Her lyrics, no matter how theatrical, retain an edge of truth.

The album does not end steadily: “Oil the Shoe if the Critter Knew Any Better” marks a return to the band’s older sound, which cannot match up to the roiling momentum of the song’s first 15 seconds, and “My Half” fails to unite the disparate threads of Gender Bender’s vocals, John Frusciante’s noodling guitar line, and background chants. But A Raw Youth still marks Le Butcherettes’ triumphant entrance to the mainstream rock arena, accomplished with no compromise to their identity.

Essential Tracks: “Sold Less Than Gold”, “Stab My Back”, and “The Hitch Hiker”