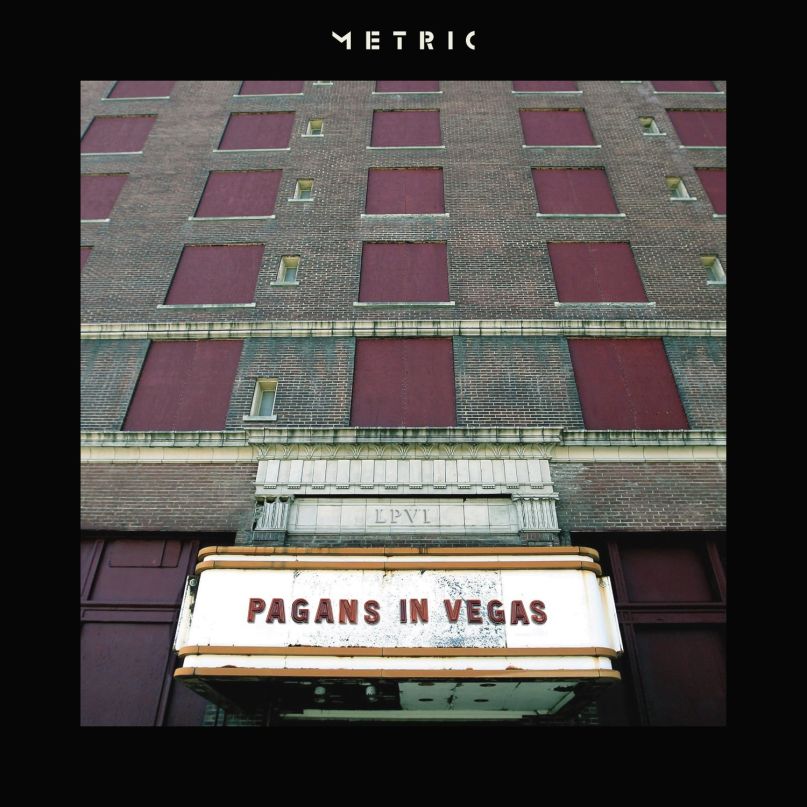 When forming Metric at the end of the ’90s, Emily Haines and James Shaw initially named the band Mainstream. Early singles like “Dead Disco” and “Combat Baby” weren’t necessarily mainstream, but really could have been. Their quirky indie rock combined slippery, new wave elements, massive arena reach, and infectious pop hooks. Over five albums, the Toronto outfit have written enough jams for an engaging live set and surrounded those songs with enough inoffensive filler that at worst they could be seen as treading water while the music world inched closer to their sound. But, after listening to Pagans in Vegas, it would seem that the indie world (and even a good chunk of the mainstream itself) has caught up or even lapped them.

While synths, drum machines, and electronic patterns have always been a part of Metric’s formula, they’ve never sounded this slick and anodyne. That toothlessness flattens Haines’ vocals, which are typically the star of a Metric album. A prime example of this is “Too Bad, So Sad”, where a decent melody is repeatedly squared off by a squiggle of synth and the least enthusiastic “woohoo” you’re likely to hear this week. On EDM-friendly “Celebrate”, an echo of Haines’ voice trails a little too closely, the word and its shadow tripping over each other on the verse. The two-part “The Face” closes out the album largely without vocals.

That’s not to say that the success of Metric is entirely reliant on Haines’ vocals — it’s just that those songs lack much of their charm without her. “The Face Part I” bumps 8-bit synths and drum machines for five minutes, doing little to differentiate itself from a mediocre SNES adventure game soundtrack. Briefly, vocals get pushed through a vocoder and buried in the mix, rendering them all but useless. There are words somewhere in the digital mire, but they’re difficult to pick out. The track ends with an outro composed of a dial tone and the mock-classical ring tone your dad still uses, followed by an ominously reverbed message that “no one is available to take your call.” It’s the sort of thing that seems like it’s supposed to convey some sort of message about connectedness and reliance on electronics, but in the end just sounds goofy. “Part II”, meanwhile, opens with the tone you’re supposed to leave your message after, followed by three minutes of epic synth organ. The grandeur and emotional depth are particularly refreshing after the rest of the album, and despite being a bit on the nose, the song registers powerfully.

The synth on “The Shade”, meanwhile, strikes an entirely opposite tone. The stuttering beat and engaging melody show how Metric had been laying groundwork for bands like CHVRCHES years ago, but the repeating squarewave synth squiggle following Haines’ voice is the sort of thing that’ll either win over or entirely destroy a listener’s interest. The blooping sound reminds me of the morning after drunkenly playing Tapper or Qbert at the local barcade, remembering the evening through a vise-like hangover headache — but that could just as easily tip over to remembering a fun night out with friends to another. “Fortunes” drops in more bassy retro synth to sink Haines’ wounded chorus, while “Cascades” yawns by on boilerplate new wave drum machine.

Opener “Lie Lie Lie” and its spy-theme guitar tone come the closest to replicating classic Metric; that prospect is a thrill, but doesn’t do much to change the conversation about a band now nearly 20 years in. At best, Pagans in Vegas recalls the heights that Metric once reached. Back then, they made it look easy, foreshadowing mainstream pop years in advance. They no longer sound like they can see the future, and even sometimes sound stuck in the past.