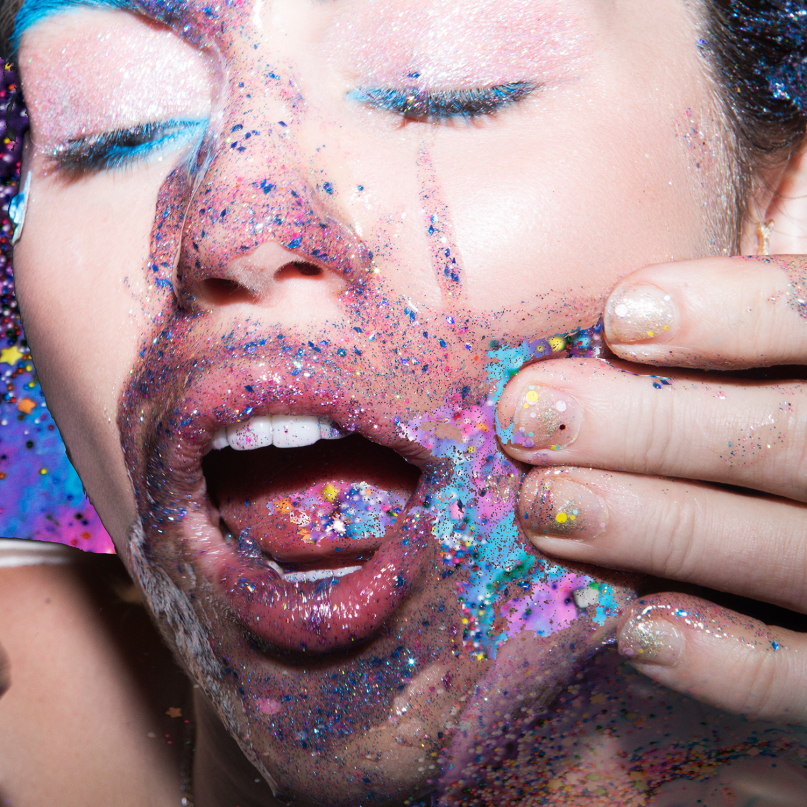 The new Miley Cyrus record is a huge mess, but at least it’s an honest one. Released as a package deal alongside a few predictably gross comments (and costume choices) before and during the VMAs, Miley Cyrus and Her Dead Petz holds true to the thesis statement Cyrus pronounced at her live premiere of weed-and-peace anthem “Dooo It!”: “I don’t give a fuck.” After hosting the VMAs, Cyrus put out a surprise double LP, co-written with the Flaming Lips, dropping it on Soundcloud for free. The record’s homepage cycles between three photos of the pop star open-mouthed, flecked with glitter and drenched in slime, visually echoing the art-via-porn aesthetic of photographer and painter Marilyn Minter. It’s as if Cyrus were flipping two huge birds to the concern trolling that huddled around her after the release of the “Wrecking Ball” video two years ago — if you thought that was bad, come see what I’ll do next.

Cyrus brings her usual DGAF crew — Wayne Coyne, Mike Will Made-It — onto Dead Petz, and draws a few new faces into the fold, like Phantogram’s Sarah Barthel, Big Sean, and even alt pop weirdo Ariel Pink, who also has a mouth that seems to put him instinctively into hot water. At 23 tracks and about an hour and a half of runtime, Dead Petz is a bloated, oozing piece of work. It vascillates without warning between spiked dance slammers and melancholy ballads, between songs about sex and songs about weed, and even a few songs about love and friendship and dreams and hopes and fears. A lot of it is bad, but a lot of it exposes Cyrus’ inner life in a way her listeners have never heard before.

Songs like “Fweaky”, “I Forgive Yiew”, and “BB Talk” let Cyrus articulate a position more offhand and nuanced than the woman scorned she played on “Wrecking Ball”. She rasps in her smoke-streaked voice about a new relationship with someone who just won’t cut the cutesy shit: “Fuck me so you stop baby-talkin’,” she sings, as casual as if she were murmuring it to her partner half-asleep. Her last label output, Bangerz, slotted Cyrus into a binary of “drama” and “party,” depending on the song; on Dead Petz, she gets to vocalize her needs and insecurities while remaining playful at the same time.

Dead Petz also offers up tunes like “Karen Don’t Be Sad” and “Space Boots”, both of which play like Flaming Lips B-sides with Cyrus on guest vocals. “I get so high cause you’re not here smoking my weed/ And I get so bored,” she sings on the latter. Her restlessness permeates the album, and a little too much of it comes off like someone telling you about this crazy dream they had (“Twinkle Song”) or this wild high they just rode (“Lighter”). Sounds cool, dude, but I think you had to be there.

Other tracks burst with unadulterated gross-out humor, like “Milky Milky Milk”, which features a distorted creeper voice repeating its title over and over until the song melts from off-color joke to damp sleaze-fest. Its sister track, “Bang Me Box”, doesn’t fare much better, with Cyrus sing-speaking lines like “I’m always sleeping naked cause you wake up and you’re creeping” over a stock disco pop beat. For a song about fucking, it’s strikingly conservative, musically — the baldness of the lyrics clashes with the safeness of everything else.

If Bangerz saw an ex-Disney star reveling in her newfound freedom from long hair and adult supervision, then Dead Petz sees Cyrus revel in her own freedom from good taste. She is not the role model Sinead O’Connor wants her to be; she no longer answers to anything but her own impulses. If the world’s still looking — and Cyrus made sure they were looking — why not give them something to look at? Dead Petz succeeds as a spectacle, even if it collapses under the weight of its own irreverence.