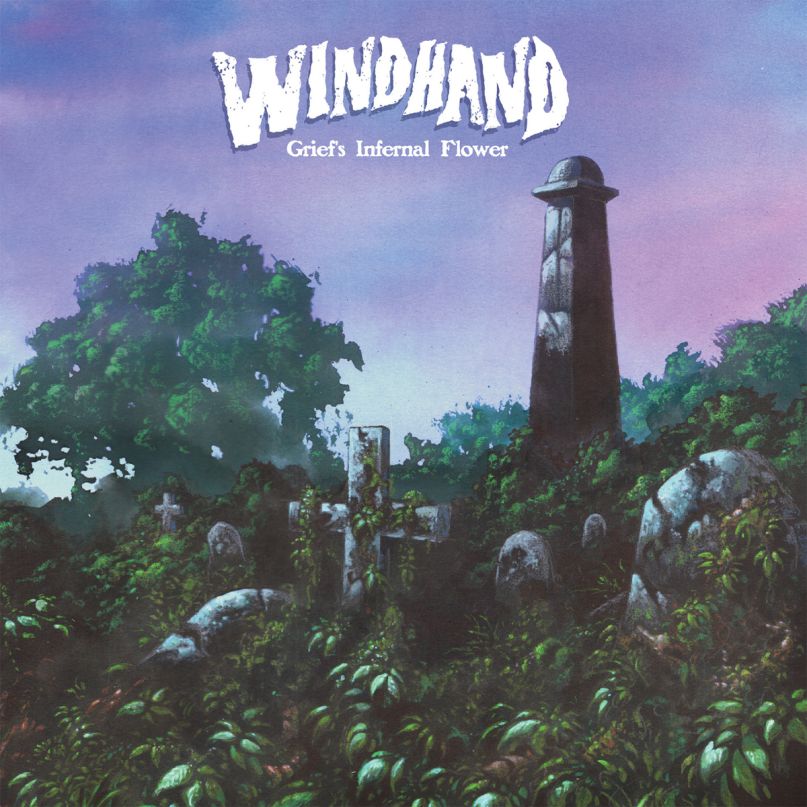 Windhand’s third full-length album, Grief’s Infernal Flower, is an achievement in modern doom metal. The record’s breath-like flow, spacious atmosphere, and hopeful melancholy coalesce into a visceral experience that begs to be lived with, shared, reflected on, meditated to, and then possessed like a personal artifact. Spend time with these recordings and they become a source of comfort, a steadiness in one’s life — steady like the methodical plod of the music itself.

“Two Urns” opens the album with a blast of sludge that rings out in near-eternal feedback, until a sudden snare roll thrusts the song into tempo and the droning chords tighten into a singular riff. Frontwoman Dorthia Cottrell appears from the sonic void as a voice of cool reassurance. Her melody wraps itself around the band’s rhythmic build, and another tight snare triggers a chorus that will live on in doom metal lore, a beckoning command: “Do something good for me now.” It’s a pure pop hook disguised in a cloak of crushing doom, and an enticing start for Grief’s Infernal Flower, which is teased out perfectly by veteran producer Jack Endino (of Nirvana’s Bleach fame). From a pure sound quality standpoint, this record is a bomb of fuzz and bass, and the band thrives on the immensity of Endino’s sound.

Windhand have been working toward a record like this since forming seven years ago in Richmond, VA. The band’s 2012 self-titled debut and 2013’s Soma were ominous, slow, and cathartic — strong albums in their own right, but trial runs compared to Infernal Flower and the clarity of its songwriting and production. Deep, brooding repetition and sluggish chord work remain Windhand’s game, but the songs here go beyond mere atmospheric doom. The psychedelic “Forest Clouds” moves to a confounding guitar rhythm that syncopates in startling contrast to the steady anticipation of a 4/4 time signature. Asechiah Bogdan and Garrett Morris’ dueling wah solos spiral and interweave in harmony. Above it all, there is Cottrell’s unrelenting vocal melody: an endless string of words that seamlessly transition from verse to chorus to verse. It’s a one-of-a-kind composition and a microcosmic sampling of Windhand’s inspired craftsmanship.

As much as any inventive riffing, Cottrell’s vivid personality distinguishes Windhand. She is front and center on Grief’s Infernal Flower, her smoky voice mixed loud and her words cutting through the drone. She gets two acoustic songs to herself here, “Sparrow” and “Aition”, which balance well against the other heavy tracks. Having dropped a solo folk record earlier this year, Cottrell is coming into her own as a songwriter and lyricist, focusing on palpable topics of love, death, philosophy, and the internal quest for spiritual calm. On the record’s longest tracks, the 14-minute epics “Hesperus” and “Kingfisher”, she gives bewitching long-form recitations, the former touting the album’s titular phrase: “Grower of grief’s infernal flower/ I am the love that only devours/ I am the rain, I am the tower/ I am the builder, the furnishing powers.”

The members of Windhand have reached that elusive point where the band becomes the central focus in their lives. They’re freshly signed to pinnacle label Relapse Records and are headlining the heaviest tour of the year alongside Monolord and Danava. Expectations were exceedingly high for Grief’s Infernal Flower, and Windhand delivered a minor masterpiece and the best doom metal album of the year.