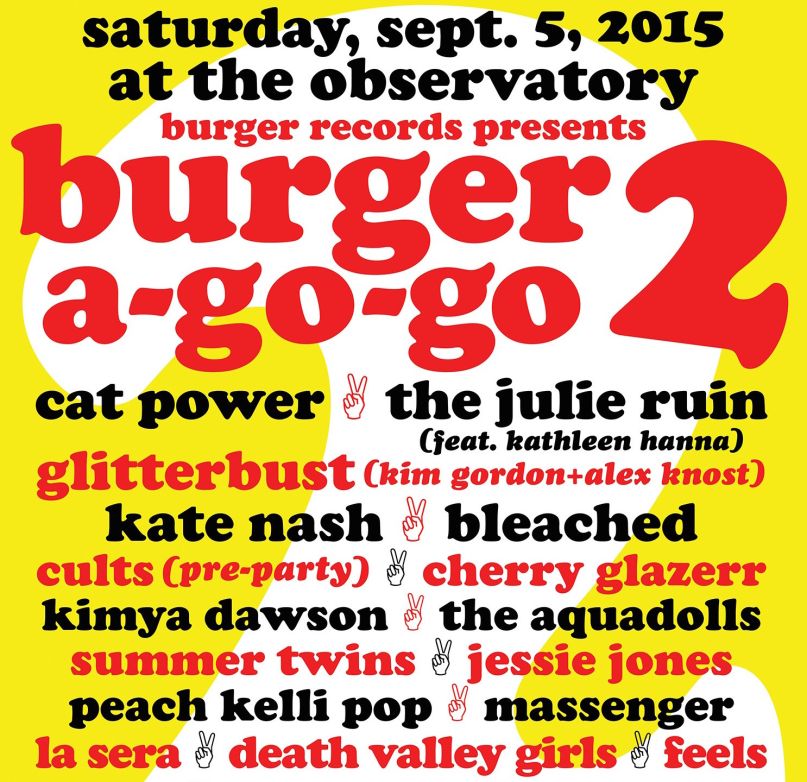 We’ve all seen the festival lineups on social media where they remove all the male-fronted acts and what is left is a scattered sampling of artists, resembling 10% or 20% of the festival bill. And as much as we criticize many music festivals’ ability to book something close to a balanced lineup, it’s hard to say things get better from year to year, with some events making an effort and others aware that they will still sell out regardless of whether they book an ample amount of non-male artists.

Enter Burger A-Go-Go, now in its second year, curating a lineup entirely made up of female-fronted acts. It’s no Coachella in size, but the event is growing, occupying the same-sized venue that their other Orange County, California event, Burgerama, would utilize in its own second year. Burgerama has since expanded, requiring the space in the parking lot outside of Santa Ana’s Observatory and Constellation Room, and with the solid turnout at Burger A-Go-Go, it was easy to imagine the gathering growing on the same trajectory.

But even if it doesn’t expand, Burger A-Go-Go feels important. Seeing an audience made up of a majority of young women, particularly at a rock show, is rare and the fest’s existence and success is a testament to the fact that there is an audience of women for music festivals. A food truck or two would have been nice as the lines for food were pretty ridiculous, and the festival did not allow ins or outs, but regardless, the event curated a vibe that allowed people of similar interests to gather as a community, to support their friends’ bands, and witness sets from some of their heroes. The overall impression was of positivity and inclusion, where men were free to join in the women’s celebration, but where the intended audience was never to be confused.

Of the dozens of acts, the following eight were the most memorable, some for better and some for worse.