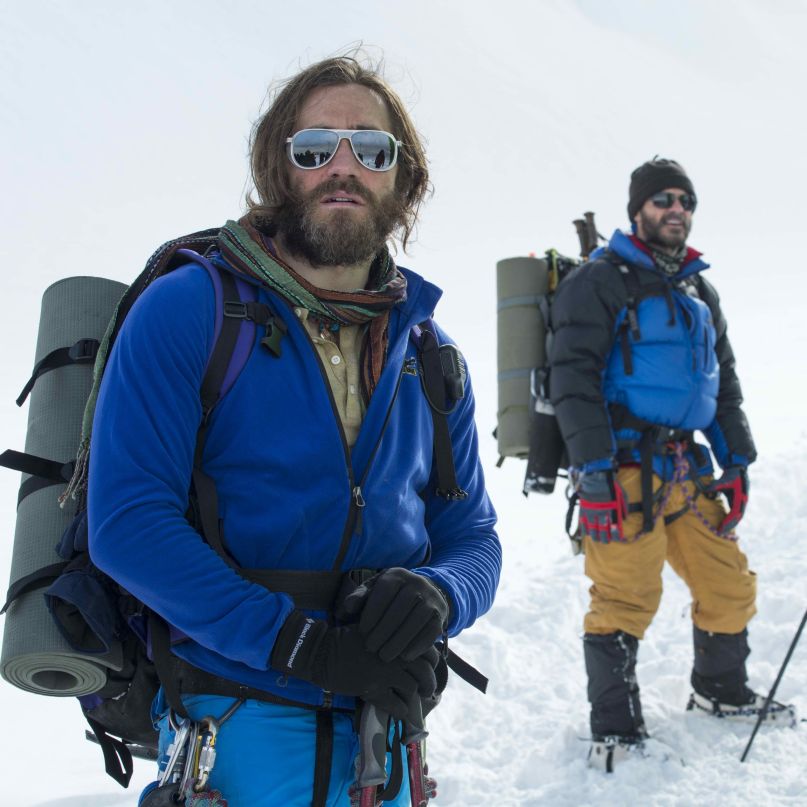 Welcome to Dude Mountain. It’s a special place where men go to die, but not before wearing kicky and colorful clothes, made possible by Patagonia, Hally Hansen, and other nature emporium purveyors. Dude Mountain, where the fellas climb high and the women stand by the phones to hear their men die. Dude Mountain. They brought up one woman and you practically have to move mountains to get her some dialogue.

Everest is a masochistic, hyper-masculine, adrenaline junkie’s film. It searches for noble deaths in all the obvious places. It’s clean, competent, nicely produced and well-cast. But it’s also a staid story of nature’s beastly side, a soap opera at high altitude. A movie for all the guys that grew up loving Ranger Rick and eventually made enough dough to dig into the snow every autumn, while leaving their families behind.

The film is based on the true story of a doomed expedition up the great white land mass in 1996. In prologue it’s explained that in the previous 25 years, commercial expedition had reached new heights of popularity, and we’re taken on a disastrous edition of one of those highly promotable trips up Earth’s Highest Mountain.

On the manifest? The leader is Rob (Jason Clarke), the founder of Adventure Consultants. He’s the classically butch alpha male leader. In 1996 terms, he is Everest’s bludgeoned, self-deifying Mel Gibson. He leads a group of miscellaneous men (and one woman) to the top, or at least as close to the top as possible, of Everest.

There’s Beck Weathers (Josh Brolin in a goatee), a yee-haw Texas Republican thrill seeker. Doug Hansen (John Hawkes) is a Washington state postal worker that speaks at grade schools. Yasuko Namba (Naoko Mori) is a Japanese businesswoman whose climbed six of the world’s seven highest summits, and deserves a film all her own to better elaborate on that story. And Jake Gyllenhaal as the hippie guru and alterna-hipster mountain goat Scott Fischer. They’re all real people told in mostly Hollywood star terms – handsome, strong, and looking to be heroically photographed.

From there, the trek goes about as well as you’d expect: sudden rasping snowstorms, little forgotten things that cost time and/or safety, sudden mania, health issues, and other bodily struggles.

All to climb a mountain.

Everest, for all its technical grandeur and slick production value, is often too cacophonous, or worse, phony-looking. To the movie’s credit, Baltasar Kormákur (helmer of the risible 2 Guns) opts for straight photography and sincere characterization. He knows how to place the camera high above his subjects at the right time for maximum 3D nausea. But Kormákur never shakes his 2D characters, or the overly earnest staging. And one never shakes the manly commercial superficiality of the whole film.

Jon Krakauer (Michael Kelly), the famed novelist, shows up as a hot catch for the expedition experts. He asks everyone in the group why they’re scaling Everest. There are some canned non-answers, but Doug, the mailman, shyly responds: “Because I can.” Call it sweet. Call it ego. At least it’s honest. And that response sums up Everest’s whole M.O., and its fatal flaw.

Again, this is about dudes sipping hot cocoa and Budweiser before zipping up their Mountain Hard Wear coats to trudge up a mountain in Nepal. Because they can afford to. That’s not a resentment so much as an observation made ridiculously, crisply visible in Everest. The film never truly conveys the brisk burn of nature, the grandeur of extreme physicality, or the satisfaction of accomplishing what’s continually bragged about as difficult, even impossible. It’s Everest. It should be scarier than the film’s digitized blue skies and gobs of snow makeup on actors, as they sob into microphones that they’ve made huge mistakes. These dudes do it just because they can. And as always, pride comes before the fall.