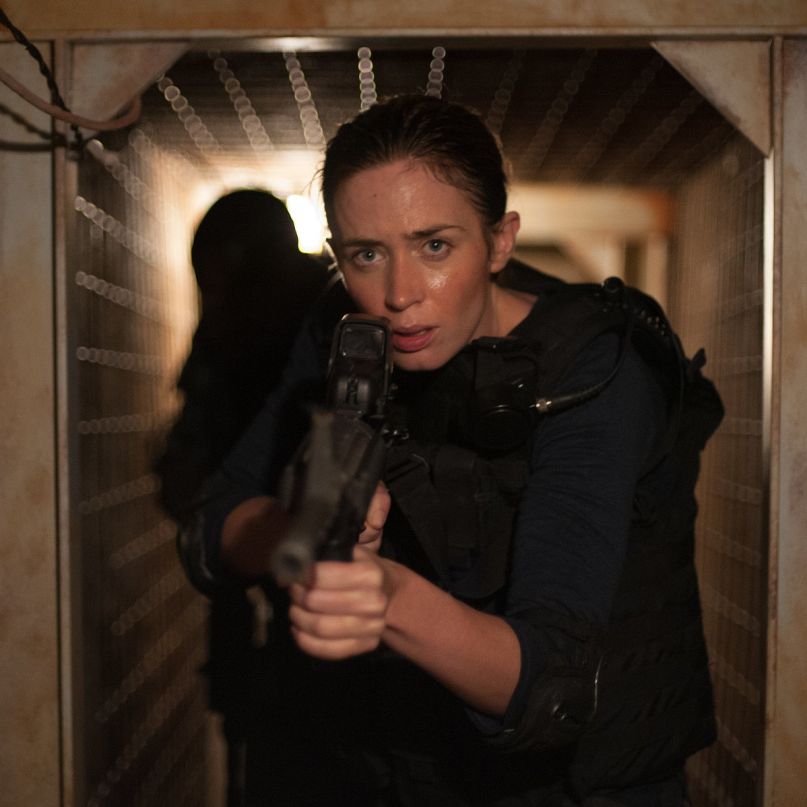 Denis Villeneuve can do Blade Runner. Denis Villeneuve can do anything. At least, that’s the feeling one has walking out of Sicario, arguably the savviest, smartest, and most exhilarating crime thriller to hit American cinemas in years. It’s the type of assured and intricate effort that restores one’s faith in not only a genre that’s become far too prosaic and dumbed down, but also today’s staggering era of filmmaking that huffs and puffs to survive each passing year and every 10th blockbuster.

You’ll certainly need to exercise controlled breathing while watching Sicario. Each frame is wired with enough anxiety to warrant a prescription of Xanax by the end credits. Yet there’s a deft finesse to the film’s adrenalized proceedings that’s particularly awe-inspiring, recalling the more wizened years of Michael Mann, Steven Soderbergh, or even the Coen Brothers. The way Villenueve glides over Mexico, or places us on the front bumper of an FBI raid, or keeps us at bay during a coarse conversation, it’s just simply the work of a realized artist.

If we’re pointing fingers, it helps that the filmmaker’s assembled a team of proficient players. Cinematographer Roger Deakins, for one, reunites with Villenueve after conceptualizing his parenting nightmare, 2013’s Prisoners. The 66-year-old veteran has lensed a number of iconic portraits in his time — lest we forget every single thing he’s done for the aforementioned Coens — but his work on Sicario borders on Greatest Hits material. How he grapples with natural scenery, specifically one blueberry-mango sunset at the climax, is more or less magic.

(Watch: Music at the Movies: Sicario)

But so is the cast. Emily Blunt knocks out her strongest performance to date as Kate Macer, a by-the-book FBI agent who leads a fearless kidnap response team in Arizona. She’s a strong soldier, a trait Blunt nailed with ease in last year’s Edge of Tomorrow, but strong isn’t enough where she’s going. An elusive, sandals-wearing government official named Matt Graver (a lively Josh Brolin) wants her for his special task force, one that will take her right to the heart of the violent crime she’s pursued for so long. It’s a career opportunity with strings attached.

At the other end of those strings is the mysterious Alejandro (a captivating Benicio del Toro), who guides Macer along their Dante-esque downward spiral into Ciudad Juarez, Mexico. Absolutely clueless and bereft of any detail, Macer slowly prods him for more information and details about their mission, to which Alejandro eventually relents, saying: “Nothing will make sense to your American ears, and you will doubt what we do, but in the end, you will understand.” It’s not exactly an agenda, but they’re wise enough words for Macer to start peeling back the layers.

And she does as the meticulous dichotomy between her and Alejandro becomes more and more accentuated. It’s a brilliant engine that fuels much of Sicario, while also providing a proper point-of-view. After all, we’re in Macer’s shoes, equally confused and terrified as we roll through the streets of Juarez, where signs for missing children, decomposing bodies, and not-so-distant gunshots ricochet in the background. Oscar-nominated composer Jóhann Jóhannsson (The Theory of Everything) heavily assists in this chaos with a haunting score that knees your guts.

What’s deeply fascinating, however, is the patient chemistry between Blunt and del Toro. Morally, they’re diametrically opposed, but they’re also circumstantially linked to same strains of crime and violence. This is a tricky facet to the story that screenwriter Taylor Sheridan uses to his advantage. Among the many things discussed in Sicario is the cyclical nature of violence and how feelings of hope and logic factor into its endless turmoil for better or worse. Alejandro is light years away from the idealism that Macer exhibits and how they try to unravel one another is where this story truly thrives.

It’s astonishing that Sicario marks Sheridan’s debut in the writer’s room. The Sons of Anarchy star has penned a remarkable screenplay worthy of comparisons to the likes of Stephen Gaghan (Traffic, Syriana). The dialogue reels off naturally, the storytelling glows with ingenuity, and the research never comes across as too academic or too pedantic. He even manages to sneak in a subtle subplot that offers a necessary perspective from the other side of the border. It’s a dicey move that could have easily turned clumsy, but he makes it all the more efficient.

Suffice to say, Sicario works on every level. It’s also fairly prescient, coming at a time when America rages on about the ethics of border control and the mounting war on drugs. Whether the film generates any buzz come awards season … well, who cares. What’s far more important is that it solidifies Villeneuve as an essential director, a title he’s technically deserved since his Oscar-nominated turn with 2011’s Incendies. But what better time than now? He’s about to shift from dark thrillers into surrealistic science-fiction, a bold leap that could provide Hollywood with another visionary like Christopher Nolan.

All of a sudden that sequel to Blade Runner doesn’t sound so crazy.