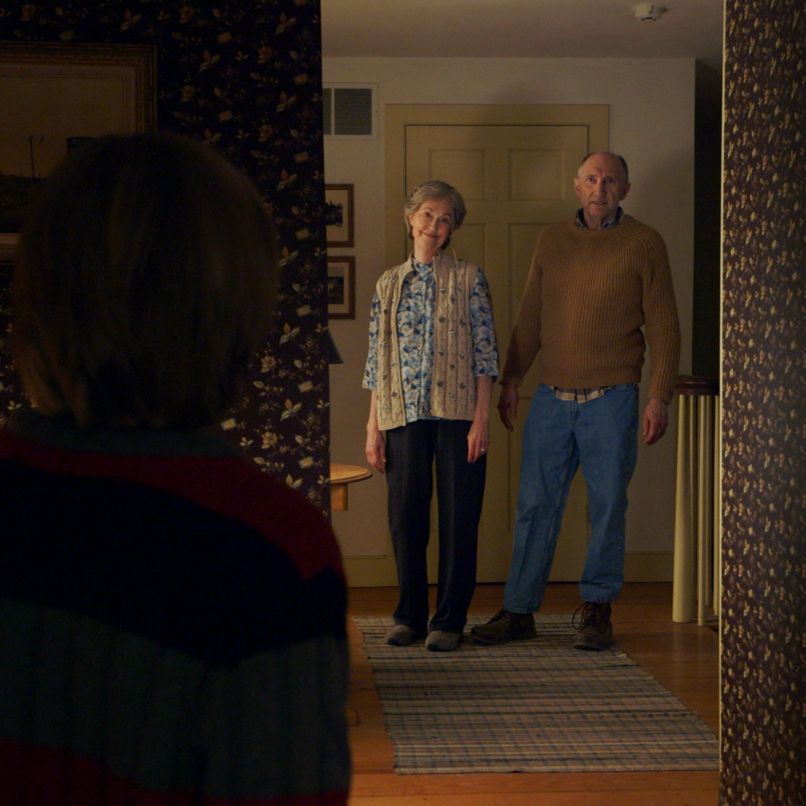 I think it was after 2008’s hilariously misbegotten The Happening that posters stopped advertising M. Night Shyamalan. He was a selling point before that, every bit as important to a film’s marketing as Bruce Willis, Sigourney Weaver, or pre-meltdown Mel Gibson. One could argue he was cruising on the cultural cache of The Sixth Sense that whole time, but there was a cult adoration surrounding his Unbreakable and a healthy respect for the great-until-the-end Signs. It was The Village’s ending that made us doubt him and Lady in the Water that made us turn on him. But it wasn’t until The Happening happened that Hollywood realized he had gone from highlight to liability. You had to squint to find his name on the posters for The Last Airbender and After Earth, and you’ll have to do the same with The Visit.

His loss, however, is our gain, because no longer do Shyamalan’s movies need to feel like an event. Such expectations hindered our enjoyment of his films — “What’s the twist, what’s the twist, gimme the twist!” — and filled Shyamalan with a lunatic ambition that crumpled under the weight of his fancifulness (see: Lady in the Water). The Visit is Shyamalan’s first truly original effort since The Happening —The Last Airbender was an adaptation of a beloved animated series, and After Earth was willed into existence by monsters — and it’s refreshing to see the auteur not only returning to the horror genre but refraining from bending it in a way that nullifies its impact.

The Visit follows Becca (Olivia DeJonge) and Tyler (Ed Oxenbould), two teenagers who are meeting their estranged grandparents for the very first time. Nana (Deanna Dunagan) and Pop Pop (Peter McRobbie) are an odd couple, however, and questions about their relationship with Becca and Tyler’s mother are met with resistance. There’s also the erratic behavior that occurs after dark and that curious bundle of shitty diapers in the shed out back. Things, as you might guess, get even weirder from there, and it’s intriguingly difficult to parse whether the problem is corporeal or supernatural.

It’s also filmed in the “found footage” subgenre of horror, a style of filming Shyamalan justifies by having Becca and Tyler film a documentary about the visit. Enough keystrokes have been clacked about the genre’s low points, but Shyamalan finds a way to sidestep those hazards. For one, he respects the convention, allowing the horror to unfold without the aid of shrieking strings. He culls more terror from slow pans and harshly lit faces easing into frame than he does cheap jump scares. Shyamalan also eschews the nausea-inducing shaky cam, opting instead for static, exquisitely framed shots that foster an uneasy calm. His enduring love for rural Pennsylvania is also on display as Becca’s camera lingers on skeletal winter branches and snowy fields.

Where the film falters is in its characterizations. Becca and Tyler are defined by a broad set of quirks — she fancies herself an intellectual, while he’s a germaphobe and budding rapper — that do little to evoke empathy or understanding, despite the film’s halfhearted attempts to make them victims of a deadbeat dad. It’s not helped by the precociousness of the child actors, especially Oxenbould’s Poochie-like turn as Tyler. Of course, much of that could be blamed on Shyamalan’s script, which farts out more dad jokes than Larry Crowne. Someone tell Shyamalan that 13-year old kids don’t know Sarah McLachlan or Shania Twain, nor do they regularly joke about them. Also, M. Night, just because you’ve heard of Tyler, the Creator doesn’t mean all rap sounds like Tyler, the Creator. Oxenbould’s Yo! MTV Raps freestyling is more Doctor Dré than Dr. Dre.

Fortunately, The Visit gets less cute as it approaches its climax, especially once Shyamalan’s trademark twist rears its head. Sure, the director’s propensity for twists became a punchline after The Village — “What a twist!” — but The Visit’s third act revelation is a doozy, a singular moment that suddenly brings the rest of the film into focus as it makes you facepalm yourself for not figuring it out sooner. Those final 15 minutes are gloriously stupid and joyously breathless.

If only he’d left it there. Unfortunately, The Visit overstays its welcome, tacking on a denouement that strains for the emotional heft Shyamalan brought to The Sixth Sense and Signs. The thing is, it didn’t need it. It works best as a simple, effective spooker. But with The Visit, Shyamalan is showing signs that while ambition is admirable, sometimes it’s better to just tell a good story.