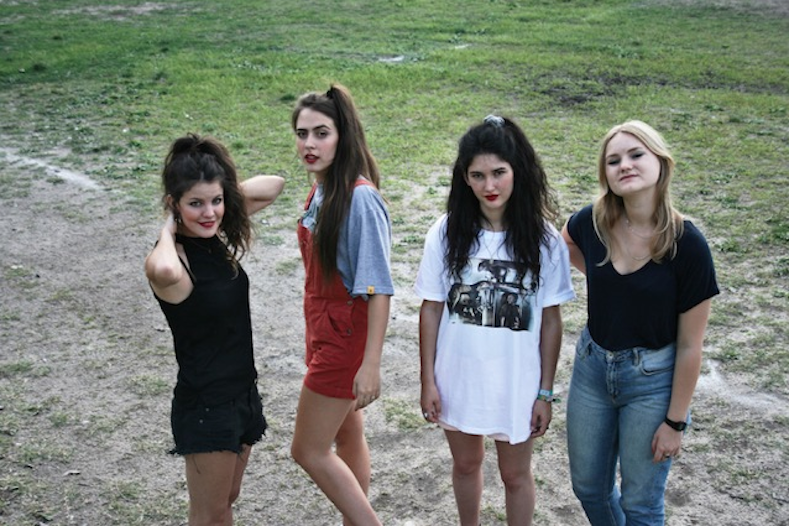 CoSigned lo-fi garage rockers Hinds have already placed themselves at the forefront of the rising DIY rock scene in Madrid, Spain. Far from a local phenomenon, it wasn’t long after their inception that they were able to bring their carefree, jangly sound across the world, making listeners fall in love with their infectiously upbeat live shows. Now, they’re set to broaden their appeal even further with their debut LP, Leave Me Alone.

Due out January 8th, 2016 through Mom + Pop/Lucky Number, Leave Me Alone was written during the rare downtime the band had over the last year between gigs. “The good part of having to write songs so separately in time is that we wrote about very different feelings we’ve lived,” the band said in a press release. “These songs try to represent the 12 faces of love we’ve experienced.“

One of those faces had already been unveiled in “Chili Town”, and now they’ve shared the new single “Garden”. Chugging drums provide a bit of cloud coverage over the swaying surf rock song, even as guitar lines shimmer like the sunlight gently poking through. Dual vocalists Ana Perrote and Carlotta Cosials add a bit of moroseness to their delivery for a more downbeat sound than we’ve previously heard from the band.

“It’s funny ’cause we thought this album would be all party and cheerfulness,” the band continued in their announcement, “but – SURPRISE – it’s not!!!!! haha. Feelings are more balanced, like in life. So suddenly we had a more sober – or even sad – album than we expected. Please don’t think we’ve turned into depressive people or something, we’ve always been humans, it’s just we’re now showing it to you.”

Take a listen to “Garden” below.

Hinds will preview Leave Me Alone this fall on a string of North American tour dates, which you can find here. Pre-orders for the LP are going on for digital and physical versions now; find the tracklist below.