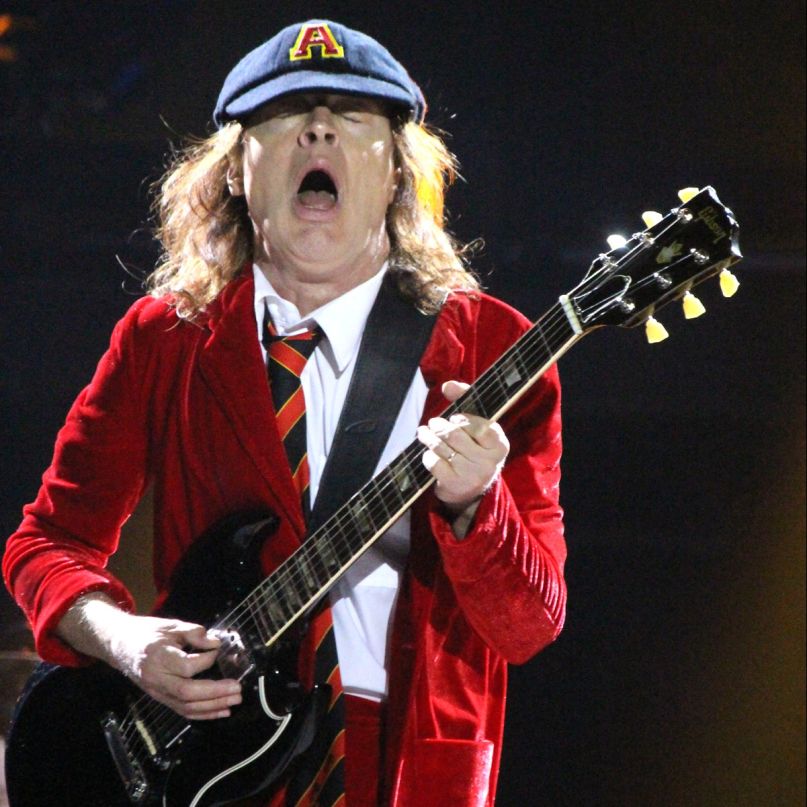 “It’s Tuesday and I want to blow my brains out.” That’s what I told everyone online this morning as I scooped up my Apple Jacks and watched the day’s work pile up second by second. Toss in a frustrating sinus migraine, one unabating aphthous ulcer, and a fucking wall shelf that would not level out properly no matter how many times I took out the goddamn nails and measured it all again and again and again … and you can imagine why covering AC/DC wasn’t exactly at the top of my list of Things I’d Like To Do Before My Batshit Crazy Mental Breakdown.

But then I stepped into Wrigley Field. I breathed in the warm air. I listened to the friendly Chicagoans. I smiled as they shared their war stories of seeing AC/DC three, or four, or 15 times. I glanced at their faded band, tour, or festival tees. I debated in my head for a good five minutes how Guns N’ Roses and Slash could both be on the same lineup. I bought a beer. I drank that beer. I stood in front of a vendor for a scary three minutes trying to decide if I, too, should be wearing blinking red devil horns. I concluded that I was only attracted to the color and not the meaning.

And then I realized I was actually having a blast.

No shit. How could you not? Watching an AC/DC show is like living out a two-hour version of the exact moment that follows a coach’s rage-fueled pep talk in the sweaty locker room seconds before the big game. This is performance enhancing rock ‘n’ roll, which is why anyone who’s ever casually glanced at a TV screen during the Super Bowl or walked through a sports bar to find a bathroom during a Sunday stroll has probably heard every one of their songs. Come to think of it, the same marriage applies to any of you self-proclaimed movie buffs out there who’ve seen a flick or three.

“Shoot to Thrill”? Iron Man 2. “Back in Black”? Grudge Match. “Thunderstruck”? Varsity Blues. “Dirty Deeds Done Dirt Cheap”? Dirty Work. “You Shook Me All Night Long”? Private Parts. “Hells Bells”? Maximum Overdrive (and pretty much every other song they’ve written). “Have a Drink on Me”? Beerfest. “Highway to Hell”? Easy, Little Nicky. “T.N.T.”? We know drama. Bottom line: Every human being on this miserable planet with means of connecting to pop culture has likely heard something of theirs in passing. Which is why I call bullshit on Film Editor Justin Gerber who told me Monday night he couldn’t think of three songs.

They want you to rock. They want you to roll. They want you to shake. They want you to explode. Save for volume levels, this isn’t a dangerous band in the slightest — and to be honest, the whole devil-worshipping, hell imagery, fiery mumbo jumbo thing is quite lame by today’s standards, especially given that such ideas acknowledge the existence of a god and, really, atheism is the rebellious way to go, duh. No, this is a loving band, with loving fans, and loving personalities. “Tonight, together, we’re gonna make some rock ‘n’ roll,” frontman Brian Johnson told Wrigley after opener “Rock or Bust”. “And the party starts right now.”

See? Is that the voice of a Satanist? Hardly, ma. C’mon, the dude’s a cool dude and all he wants are some cool vibes. So does Angus Young, who at the lean age of 60 acts more like a rambunctious college freshman than one of today’s actual college freshmen. He couldn’t define “pretension” if he was handed a Webster’s dictionary. And watching him do his iconic lil’ kicks and shimmy slides, while I somehow remained invested during his extended guitar solo in “Let There Be Rock”, despite a ludicrous, Tenacious D-esque runtime of 20 minutes, reminded me why it’s sometimes okay to stop worrying and simply love rock ‘n’ roll.

Setlist:
Rock or Bust
Shoot to Thrill
Hell Ain’t a Bad Place to Be
Back in Black
Play Ball
Dirty Deeds Done Dirt Cheap
Thunderstruck
High Voltage
Rock ‘n’ Roll Train
Hells Bells
Baptism by Fire
You Shook Me All Night Long
Sin City
Shot Down in Flames
Have a Drink on Me
T.N.T.
Whole Lotta Rosie
Let There Be Rock
Encore:
Highway to Hell
For Those About to Rock (We Salute You)