"I would not grant her the rights to use Charmin!" 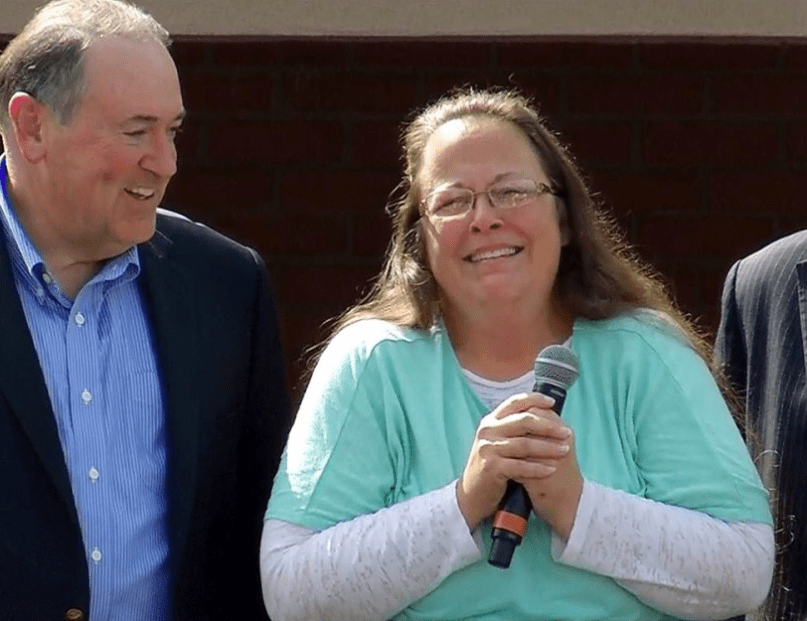 Looks like Mike Huckabee could learn a thing or two about poor campaign tactics from Donald Trump. Much like the Republican frontrunner, the Huckster has found himself in hot water for the unauthorized use of an artist’s song at a public event. While Neil Young simply flipped Trump the metaphorical bird and REM handed him a cease and desist, ’80s rockers Survivor are considering taking it a step further by threatening a lawsuit over the use of their classic “Eye of the Tiger”.

Huckabee used the song to soundtrack Kim Davis’ release from jail yesterday. Davis is the Kentucky County Clerk who, after refusing to recognize the Supreme Court’s ruling and issue marriage licenses to same sex couples, spent six days behind bars. “Eye of the Tiger” blasted from the speakers while Davis, her (fourth) husband, her lawyer, and Huckabee took the stage.

“NO! We did not grant Kim Davis any rights to use ‘My Tune -The Eye Of The Tiger’,” [sic] Survivor guitarist Frank Sullivan wrote on the band’s Facebook page. “I would not grant her the rights to use Charmin! C’mom Mike, you are not The Donald but you can do better than that.” He ended the post with a hint at the eventual legal actions: “See Ya really SoooooooonnnnnnN!!!!!!”

While the event wasn’t ostensibly a Huckabee stump stop, given the fact that Davis’ case is such a focus of the national spotlight and that Huckabee is running for president, the band could have a real legal leg to stand on. Incidentally, this isn’t the first time in recent memory that “Eye of the Tiger” has been at the center of political intrigue.

“I do not like mixing rock and roll with politics,” Sullivan told Rolling Stone. “They do not go hand in hand. What upset me most was that, once again, my song was being used to further a political agenda — and no one even bother to ask permission.”

Sullivan is referring to Newt Gingrich’s 2012 presidential bid, which used “Eye of the Tiger” as entrance music during campaign rallies. A lawsuit was filed in that situation, though the two parties settled out of court under undisclosed terms. Whether or not this current incident leads to similar legal action is yet to be seen, though Survivor’s Jim Peterik makes it clear that they’re not taking the matter lightly:

I have not authorized the use of Eye of the Tiger for use by Kim Davis and my publisher will issue a C&D. This does not reflect my views.

Watch Survivor’s performance video for “Eye of the Tiger” below.