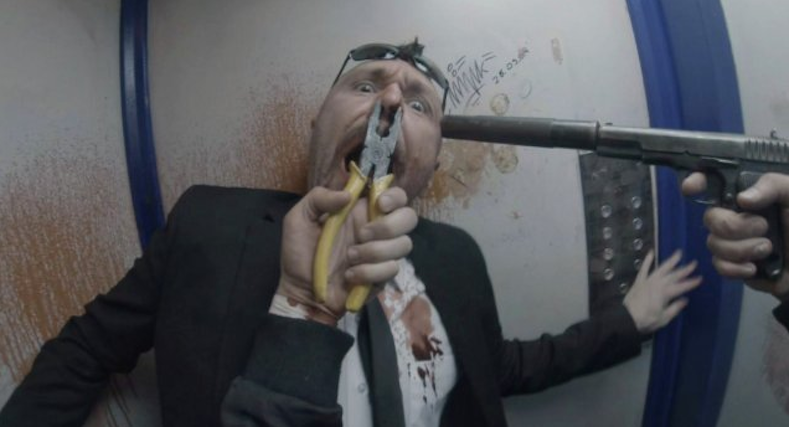 Two years ago, director Ilya Naishuller attempted to capture the excitement of a first-person shooter video game in a short film called Bad Motherfucker. What began as a fun exercise to see if a first-person story action story was even possible has exploded into a full-fledge feature film, Hardcore, which premieres this week at the Toronto International Film Festival. To build up already mounting anticipation, Biting Elbows has released the first trailer for the balls-out film.

Like Bad Motherfucker, the entirety of Hardcore is shot from the hero’s point of view using a custom head rig and a pair of GoPros. The result is that you, the viewer, take on the perspective of a newly awakened cyborg as you hunt for your kidnapped wife through the streets of Moscow. She’s been taken by a vicious telekinetic with an army of mercenaries, and your only ally appears to be a man named Jimmy, played by District 9 and Chappie star Sharlto Copley.

With the viewer front-and-center for every gun battle, daring escape, and vicious torture scene, this thing looks pretty damn intense, so strap in and press play on the trailer below.

The film is produced by Naishuller alongside Timur Bekmambetov (Wanted, Abraham Lincoln: Vampire Hunter), with Copley serving as an executive producer. Find the full synopsis ahead.

You remember nothing. Mainly because you’ve just been brought back from the dead by your wife (Haley Bennett). She tells you that your name is Henry and congratulations, you’re now a cyborg.

5 minutes later, your wife has been kidnapped and you should probably go get her back. Who’s got her? His name’s Akan (Danila Kozlovsky), he’s just a psychotic megalomaniac with telekinetic powers, and a never-ending army of mercenaries. You’re also in an unfamiliar city of Moscow, Russia and everyone wants you dead. Everyone, except for a mysterious British fellow called Jimmy (Sharlto Copley). He might be on your side. Good luck Henry. You’re very much likely to need it.